Church Offering Relief to Tens of Thousands of Flood-Weary Peruvians 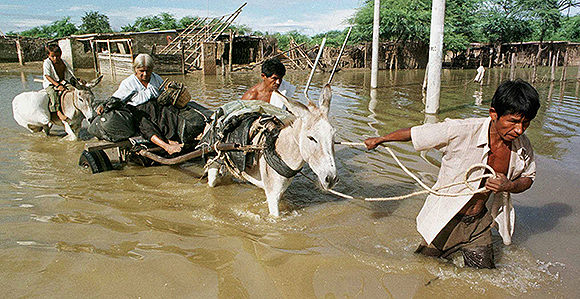 The Yovera family leave Chato Grande, outside of Piura, which is about 950 kilometers (590 miles) north of Lima, to move to a refugee camp along the Pan-American highway on March 15. Heavy flooding caused by El Niño has destroyed most of the houses in Chato Grande and neighboring villages. Over 230,000 houses have been destroyed by El Niño in Peru since the first of the year.

“I am grateful for this assistance from the Mormon Church in this difficult time for Peruvians.” —Nancy Lange, Peruvian first lady

Peruvians in many regions of this South American nation continue to endure the devastating and sometimes deadly effects of torrential rains and massive flooding.

The ongoing deluge has claimed 94 lives and left an estimated 700,000 people homeless in Peru. Meanwhile, the disaster has cost the Peruvian economy an estimated $3.1 billion, or almost 2 percent of the country’s annual output of goods and services, according to the Los Angeles Times.

The floods have impacted about 1,400 Latter-day Saint families. No members have died and no Church properties have been seriously damaged, reported the Church’s humanitarian emergency response director, Bruce Muir.

All missionaries in Peru “are safe and accounted for and are performing community service in their areas,” he added.

The Church has aggressively responded, shipping more than 200 tons of food and other provisions to the impacted regions.

“Some 36,000 people have benefited, so far, from the Church donations,” said Brother Muir.

A large chunk of the Church’s donation was sent to flood victims in the northwestern city of Piura, a metropolis of 1.8 million where hundreds of families have been forced from their homes.

The donations have included boxes of water, tuna, beans, evaporated milk, noodles, cooking oil, and rolls of plastic to be used to cover ceilings from torrential rain.

Peruvian First Lady Nancy Lange accepted the donation of provisions from the Church, according to the Church’s Peruvian country web page.

“I am grateful for this assistance from the Mormon Church in this difficult time for Peruvians,” she said. “Not only has Piura been affected by the rains, but also other regions such as Lambayeque, La Libertad, Tumbes, and Ancash.”

Mrs. Lange added her wish for Peruvians across the country to unite and work together “so that the thousands of people who have lost everything do not lose hope.”

Elder Carlos A. Godoy, a General Authority Seventy who presides over the South America Northwest Area, told the Church News that the Peruvian members are playing key roles in caring for affected members.

“The real workload is being performed by the local leaders—the bishops and priesthood quorum presidencies and Relief Society leaders,” he said.

The missionaries and the youth, he added, are also eager to serve in their own communities. “They are teaching the gospel through their service.”

Peruvian weather experts see little chance for respite in the near future, as heavy rains are forecast to continue across the country. Rains have been unseasonably intense since January, with the most severe damage reported in the country’s northwestern coastal areas as a result of what’s being described as an El Niño weather event, according the Los Angeles Times.

Difficult days are ahead in Peru. The flooding is certain to exact a long-term, economic impact on many Latter-day Saints. But they know they are not alone, said Elder Godoy. The gospel offers them “an anchor and an eternal vision.” 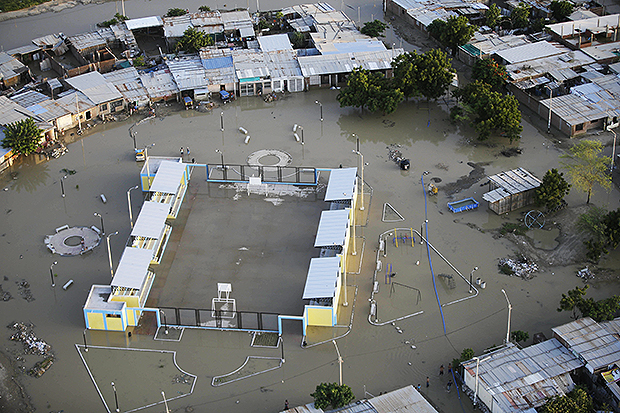 A flooded neighborhood is seen from the air in Piura, Peru, March 22, 2017. The country has been hit by intense rains, overflowing rivers, mudslides, and flooding, the worst seen in two decades, according to Peruvian authorities. Photo by Martin Mejia.