“The people are so loving and so anxious to serve the Lord and to serve each other.” —President Russell M. Nelson

Over the course of nine days, President Nelson and his traveling party visited members and held devotionals in five countries in South America, concluding with the dedication of the Concepción Chile Temple.

After meeting with the president of Peru on October 20, President Russell M. Nelson addressed missionaries in Peru and Bolivia and spoke to almost 6,000 at a member devotional at Lima’s Coliseo Mariscal Caceres. The devotional, held in the indoor arena, was broadcast to meetinghouses across the country.

During that devotional, President Nelson dismissed his interpreter to speak to the Peruvian members in their native language.

In Spanish, he promised that Peruvians would find delight in the words of Jesus Christ by applying His teachings every day. “As you do this, you will have joy,” said President Nelson.

President Nelson’s next stop on the South America ministry tour was in El Alto, Bolivia. The city, which is the highest major metropolis in the world, is known for giving visitors altitude sickness.

During a devotional held in the Polideportivo Heroes de Octubre in El Alto on Sunday, October 21, a healthy and unaffected President Nelson spoke in both English and Spanish in an address broadcast across the country.

“You parents and teachers have a great responsibility to teach these children,” President Nelson said. “Teach them what it really means to be a child of God. They’re made in His image. … Teach them to pray to Him. … And teach them about the Savior of the world, the Lord Jesus Christ, who died for us.”

President Nelson’s third stop was in Asunción, Paraguay. The prophet met with missionaries from the two missions in Paraguay before later speaking in a devotional address on Monday, October 22.

Some missionaries traveled over 48 hours for the opportunity to meet the prophet and hear him speak.

Speaking to reporters after the devotional held in the Bourbon Hotel Convention Center, President Nelson said that the best is yet ahead for members in South America. “We are just looking at the beginning now. It is a process.”

In a tent “transformed” into a chapel, President Nelson addressed some 4,200 Church members in Montevideo, Uruguay, on Thursday, October 25.

The devotional was held at the Landia Centro de Espectaculos and broadcast across the country. It marked the fourth stop on the South America ministry tour.

President Nelson promised that if the people will feast upon the words of Jesus Christ and apply His teachings, “you will prosper in the land and have joy in your posterity, if you are faithful in keeping the commandments.”

Finally, President Nelson arrived in Concepción, Chile. On Saturday, October 27, just hours before the dedication of the Concepción Chile Temple, the prophet spoke to 1,500 youth meeting in the Talcahuano Chile South Stake center—and thousands more across the country watching it via a broadcast—about temple blessings and five topics to study.

“You are beloved youth of the noble birthright,” he said. “I believe in you. I trust you. I love you. And I bless you with all that God knows that you need.”

The next day, he dedicated the Concepción Chile Temple, the first temple he has dedicated as President of the Church. The temple is an indication of the deepening and strengthening of the Church throughout South America—and the world.

“We feel very grateful,” President Nelson said. “The people are so loving and so anxious to serve the Lord and to serve each other. … It really is a sacred feeling you have among them.” 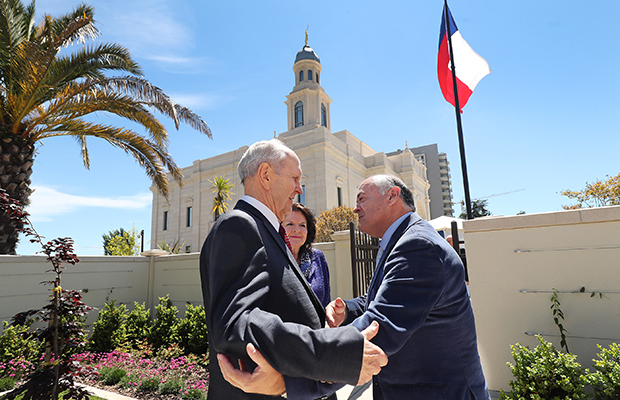 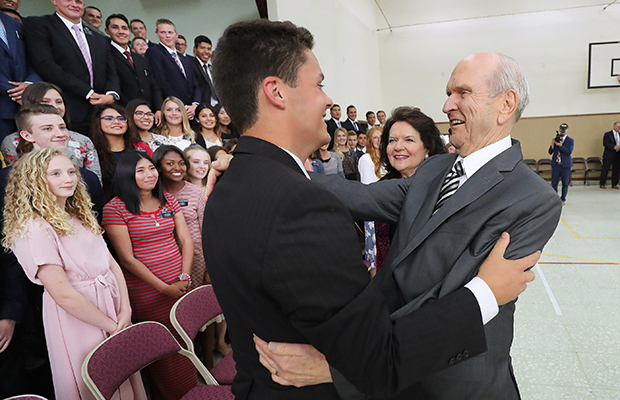