In a joint press conference on Friday, October 26, the American Red Cross recognized The Church of Jesus Christ of Latter-day Saints for donating $1.5 million to the Red Cross.

The $1.5 million donation is designated to purchase 10 new-generation emergency response vehicles, which are considered to be a key part of the Red Cross’s disaster relief operations and are deployed following events like the recent hurricanes Florence and Michael in the southeastern United States.

The vehicles, with their iconic Red Cross branding, are often the first sign of relief as they arrive in hard-hit areas following disasters. “The mission of the American Red Cross cannot be fulfilled without consistent and generous partners,” said Heidi Ruster, Utah and Nevada regional executive for the Red Cross, in a press release. “We are grateful for the continued collaboration with The Church of Jesus Christ of Latter-day Saints to make a difference in the communities we serve.”

Although historically the two organizations have collaborated for nearly a century, the organizations once again formalized their long-standing relationship by renewing the Memorandum of Understanding, which was first signed into effect in 2005, at Friday’s press conference.

Key representatives from the Church in attendance at the press conference, which was held at the Utah and Nevada regional headquarters office in Salt Lake City, included Bishop Dean M. Davies, First Counselor in the Presiding Bishopric; Sister Jean B. Bingham, Relief Society General President; and Jeff Foy, emergency response manager for the Church. 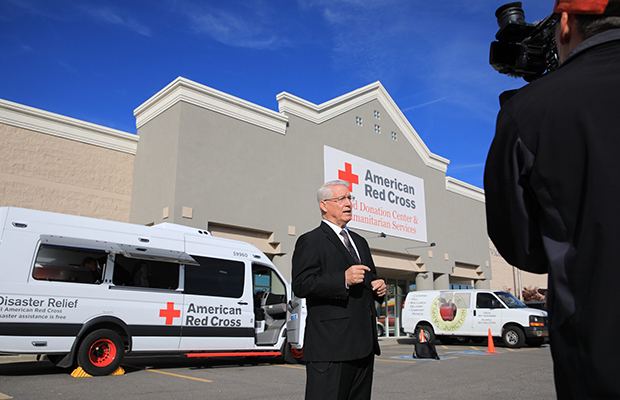 Bishop Dean M. Davies of the Presiding Bishopric speaks to journalists October 26, 2018, after announcing a donation of $1.5 million to the American Red Cross to buy 10 new emergency response vehicles.

“The partnership among the American Red Cross and the Church spans nearly a century since working together on humanitarian relief efforts during World War I,” said Bishop Davies. “We recognize and appreciate the skill and expertise the Red Cross organization and their people bring to bear when people need it most and are pleased to join hands with them in reaching out to those in need.”

In 2015, the Church donated the $1.8 million proceeds from their film Meet the Mormons to the Red Cross, and over the past three decades, the Church has collaborated with the Red Cross on over 220 projects throughout the U.S. and donated over $10 million for Red Cross humanitarian projects. 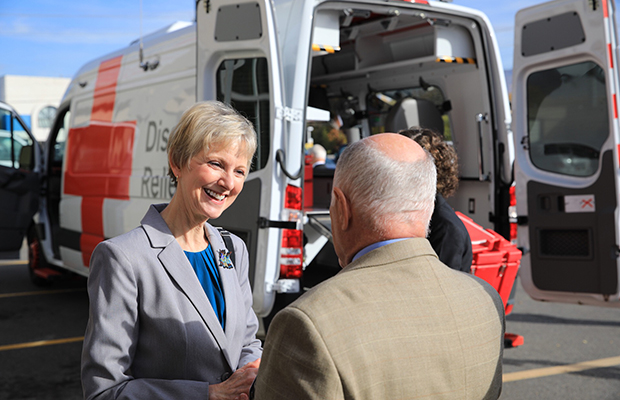