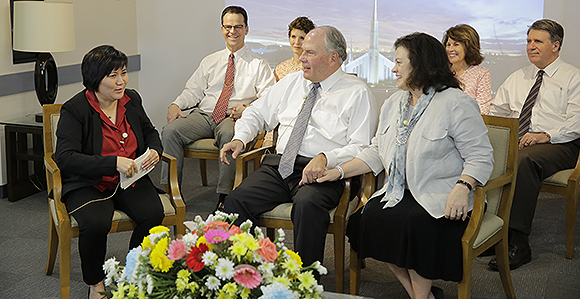 “God had prepared [the Philippines] by divine design to become a powerhouse in the Church in the latter days.” —Elder Ronald A. Rasband of the Quorum of the Twelve Apostles

After standing on the sites of current and future temples in the Philippines and looking into the faces of some of the more than 750,000 Filipino Church members, Elder Ronald A. Rasband did not wait to share his impressions.

In a seven-minute Facebook live video—the first of its kind broadcast in the Asian nation by a member of the Quorum of the Twelve Apostles—Elder Rasband made an apostolic promise.

“This is just the beginning,” he said. “The Lord has great plans in store for the Church in the Philippines.”

The message had not been planned and was not scheduled.

On February 23, sitting with his wife, Sister Melanie Rasband, and with members of the Church’s Philippines Area Presidency, Elder Rasband felt the need to reach out. “Let’s go live on Facebook,” he said.

Elder Shayne M. Bowen, a General Authority Seventy and President of the Philippines Area, said Elder Rasband immediately altered his plans. “Elder Rasband said, ‘I am calling an audible. Is it possible to do a Facebook Live event today?’”

With the assistance of a great team of Church office employees, “the message went out far and wide. With Filipinos all over the world we had literally tens of thousands of views within a 24-hour period,” said Elder Bowen. “What made it so special was the fact that it was a very spiritual experience tailored to the specific needs of the Philippines.”

The event was a highlight of his February 13 through February 26 visit to the Church’s Philippines Area.

After arriving in the country, Elder Rasband braved traffic to visit future temple sites in Urdaneta and Alabang, as well as the Church’s dedicated temples in Manila and Cebu.

“I have the distinct impression that the Lord is going to use the members of the Church in the Philippines to help bless His work in Asia and the rest of the world too,” Elder Rasband said. The Philippines “is going to be a source of huge strength for the future of this Church.”

Elder Bowen said during his visit Elder Rasband spoke about how “God had prepared this country by divine design to become a powerhouse in the Church in the latter days.”

President Gordon B. Hinckley offered a prayer on the Philippines in 1961 at the Manila American Cemetery and Memorial, commencing missionary work in the Asian nation. Today there are 101 stakes and 21 missions. Soon there will be four temples.

“We are just getting started,” said Elder Rasband.

In addition to the Facebook Live event, Elder Rasband spoke in meetings for members and missionaries, encouraging them “to rise up” and prepare for the country’s great future.

In one meeting he asked converts to the Church to stand; 70 percent of the congregation responded. A few more were second-generation Church members, and even fewer were third-generation members.

“What you are here to do is build a multigenerational Church in the Philippines,” he told them. “Your wards, your branches, your stakes are obviously important. But the most important unit of this Church is your family, and that is what you have to work on building—multigenerational families.”

Referencing the impact of the six generations that precede his own Church membership, Elder Rasband added: “Your faithfulness will flow on to future generations. You are not living your lives just for yourselves. You are living it for your future posterity.”

When Sister Rasband speaks to missionaries across the globe, she reminds them to smile. But “that was not necessary in the Philippines,” said Elder Rasband. “You don’t have to tell Filipino missionaries to smile. They are alive with happiness.”

Elder and Sister Rasband shake hands with each elder and sister.

“I have traveled the whole world; I have been to every continent,” he added. “You would be hard pressed to find a people happier than [those] in the Philippines.”

This faith thrives amid challenges in the Philippines—where the average commute for a Church employee is three hours, work is hard to find, and disasters strike the land often. “In 14 days I never heard a single person complain,” said Elder Rasband of his visit to the country.

Elder Rasband expressed his gratitude to the Filipino members “for all that they have done,” during part of his spontaneous Facebook Live event—now viewed more than 68,000 times.

“First and foremost, we have felt the great love of the Filipino … members of the Church whom we have been with—missionaries, members, young single adults,” he said. “Everywhere we have been, we have felt a great outpouring of happiness and love by members. It has really warmed our hearts and made us want to be our very best.”

The Church is very well established in the Philippines, he said. This foundation “provides a wonderful springboard” for the Church going forward in the future. Filipino Latter-day Saints “are going to play a part in the growth of the Church throughout the world, not just Asia.” 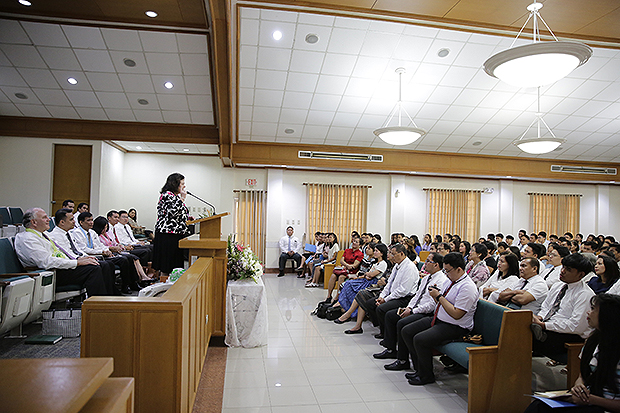 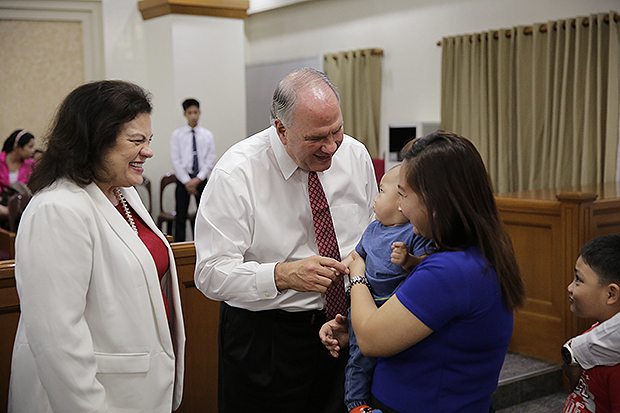 Elder Ronald A. Rasband visits with Filipino Latter-day Saints after a meeting. 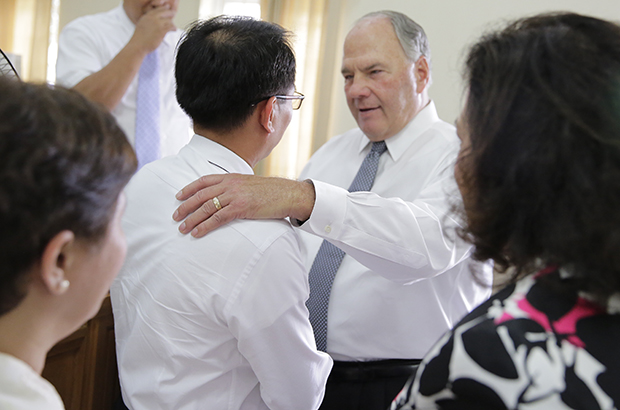 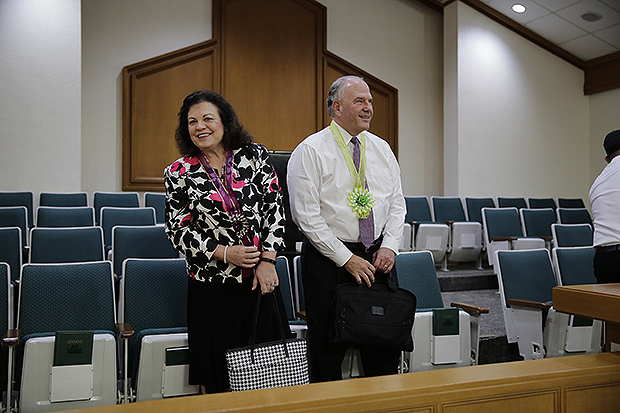 Both Elder and Sister Rasband spoke to Latter-day Saints in the Philippines on their trip from February 13 to February 26. 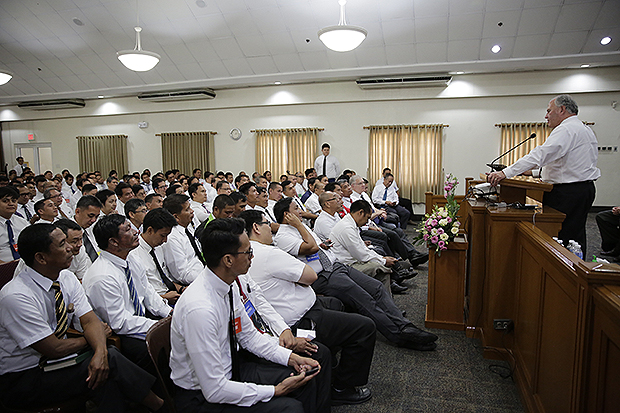 Elder Ronald A. Rasband says, “I have traveled the whole world; I have been to every continent. You would be hard pressed to find a people happier than [those] in the Philippines.” 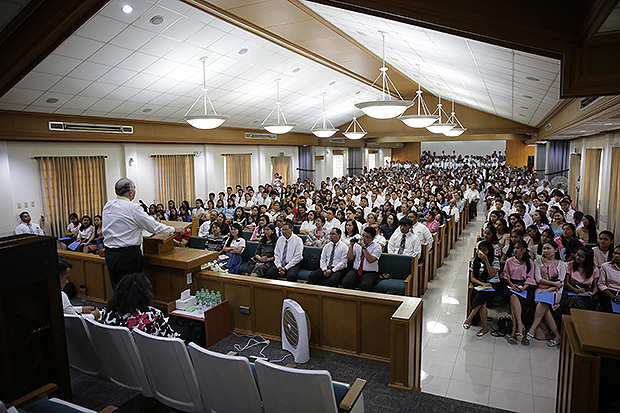 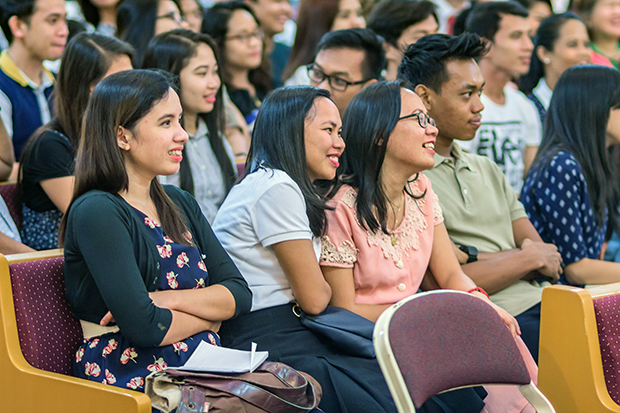 Filipino Church members listen to Elder Rasband and other leaders. 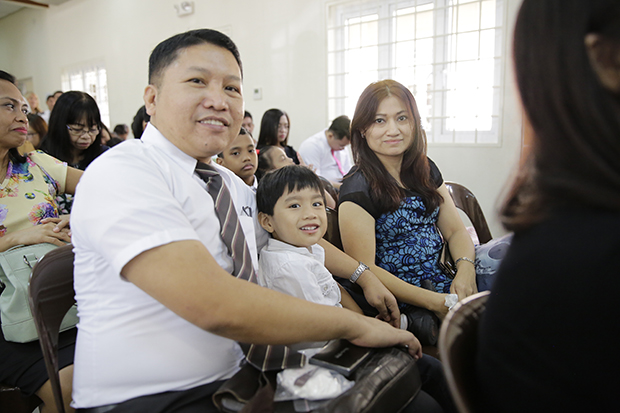