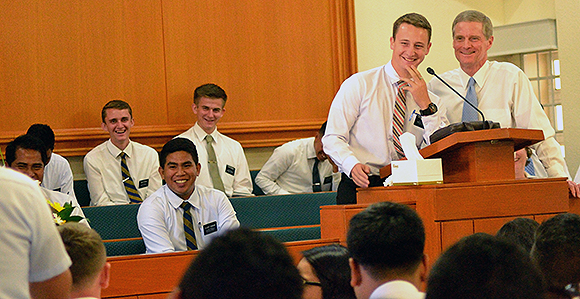 Elder David A. Bednar of the Quorum of the Twelve Apostles visits with missionaries in Naga, Philippines, during an assignment to the Philippines February 15–27, 2017.

After a recent visit to the Philippines, Elder David A. Bednar of the Quorum of the Twelve Apostles spoke of a sweet phrase he heard often as Filipino Latter-day Saints prayed: “We are so much thankful.” The phrase represents the resilience and faith of a people who—despite many and frequent natural disasters—are happy and spiritually strong, said Elder Bednar.

The expression—born by combining English and Tagalog phrases—“reflects a sense of gratitude for simple things,” said Elder Bednar. “It speaks to the goodness of the people. These people are filled with a simple faith—an uncluttered, uncomplicated faith.”

Elder Bednar—accompanied by his wife, Sister Susan R. Bednar—visited the Philippines February 15–27, addressing thousands of Church members and teaching missionaries in seven of the Church’s 22 missions in the nation. Missionary work officially began in the Philippines more than five decades ago, in 1961. Today there are 728,295 Latter-day Saints and two temples in the nation. Elder Bednar also visited two cities—Cauayan and Laoag—that have never before been visited by an Apostle.

Elder Bowen said the Philippines is a land of beautiful, God-loving people. “It is also a land of typhoons, earthquakes, floods, and landslides. These natural disasters are a fact of life in the Philippines. It is amazing to see the resilience of the people in the face of these challenges, which never end. When most people would give up, the Filipinos are always ready to rebuild without complaint.”

This resilience was evident in every congregation they visited throughout the country, said Elder Bednar. The members’ faithful resilience makes the expression used when they pray—“we are so much thankful”—even more touching, Elder Bednar said.

Elder Bowen agreed: “One of the most endearing terms that you hear in meetings in talks and in prayers is the phrase, ‘We are so much thankful.’” Elder Bowen also commented, “The reason I think it is so endearing is that the smiles and the goodness of the Filipinos is unbelievable. They are not only thankful, they are ‘so much thankful.’ Gratitude is one of the outstanding virtues of the Filipino,” he explained. “Maybe because of the many natural disasters and challenges they continually face, they are more grateful in all things.”

A missionary in the Philippines Manila Mission explained that the phrase “we are so much thankful” is “just an ordinary expression used by Filipinos, especially whenever we pray. We use the ‘much’ to show intensity and heartfelt thanks for the abundant blessings.”

Elder Bednar said that it was overwhelming to watch the eagerness of the people—who came to meetings early and then lined up to greet an Apostle.

Elder Bowen said that during his visit, Elder Bednar spoke to more than 25,000 Latter-day Saints in person or with the aid of technology. Before leaving the country he participated in an area-wide devotional, which was broadcast to more than 170 locations in the Philippines.

President Jordan G. Magapan of the Laoag Philippines Stake said Church members were “very amazed,” by the visit. “This is the first time an Apostle of the Lord has visited our place,” he said. Members felt Elder Bednar was a “representative of the Lord,” he added.

President Robert M. Andrada of the Philippines Laoag Mission said some young single adults traveled up to eight hours to attend the meeting with Elder Bednar.

President Ferdinand R. Arzaga of the Makati Philippines Stake said when the members in the Philippines learned Elder Bednar was coming to their country they immediately began to pray for him.

“With this kind of preparation, we were able to receive inspiration upon inspiration, knowledge upon knowledge, revelation upon revelation, visions upon visions. And we have felt the Lord our God in our midst—speaking and teaching us—and we also gained a very strong testimony that indeed Elder Bednar was called of God,” he said.

Before traveling to the Philippines, Elder Bednar asked the missionaries to read and study four conference talks in preparation for his visit. “The missionaries had prepared well and were anxious to have their questions answered,” said Elder Bowen. “Elder Bednar made it clear in the very beginning that the Holy Ghost is the teacher and that they would be taught as much as they were prepared and willing to receive.”

President Rudy A. Carlos of the Philippines Missionary Training Center shared a powerful example: Elder Bednar stopped at the missionary training center for an unplanned visit and spoke with a group of missionaries. He taught about the process that takes place and the revelation received by the members of the Quorum of the Twelve Apostles as each missionary is extended a call to serve as a full-time missionary. Elder Bednar emphasized that they are first and foremost called to the work—to labor as a full-time missionary. And then they are assigned to a place or a mission.

A sister missionary, worried about a recent change in her mission call, was in the group. “In his loving, kind, assuring, and apostolic manner, [Elder Bednar] assured her of the inspiration for her call,” recalled President Carlos. “It was a very spiritual moment to observe an Apostle of the Lord ministering to that one person who was in need. This was a great example of Elder Bednar’s focus on ‘one-by-one’ ministry.”

President Creg Ostler of the Manila mission said Elder Bednar created an extraordinary climate to facilitate missionary learning. “Over 70 percent of our missionaries are not native English speakers,” he said. “Culturally, many are very, very shy. Because of the spirit [Elder Bednar] brought and because of the love and acceptance they felt, they actually stood and asked questions or shared insights.”

Mission presidents in the Philippines said Elder Bednar asked the missionaries to be “agents unto themselves” and to “become truly converted.”

Noting that Elder Bednar was the first Apostle to visit the Philippines Laoag Mission, President Andrada said the meeting was a spiritual feast. “Missionaries received answers to their questions.”

President Andrada said the first missionary to raise his hand was not called upon. Later in the meeting, however, Elder Bednar went back to him. “This missionary said his question was already answered, not from what has been said but what he had received from the Spirit.”

President Kim C. Bertin of the Quezon City North Mission said many missionaries reported that Elder Bednar’s visit was the highlight of their mission. “They received a clear understanding of how their faith motivated them to act and that it was their responsibility to act as agents knowing the plan of happiness,” he said.

Conversion is important in a country where national disasters are prevalent, said President Carlos. He has personally witnessed members in the country experience a number of typhoons, flooding, earthquakes, and other calamities.

“As soon as the storm departs and the weather calms down, the people simply start moving on in rebuilding their homes, then assist in the rebuilding of other people’s homes, roads, and other infrastructure,” said President Carlos. “We have seen them demonstrate this resiliency and resourcefulness following a series of major calamities in other parts of the country. When afflicted by personal crisis such as health or financial issues, the Filipino Saints bounce back with great faith and trust in the Lord.”

For example, President Dale K. Kotter of the Philippines Legazpi Mission said the areas within his mission boundaries took the brunt of Typhoon Nina, which struck on Christmas Day.

“Although many lost everything, they were grateful for small acts of kindness shown to them. I believe they are resilient and happy because of their ability to see and acknowledge the blessings of the Lord. The Filipino Saints indeed have thankful hearts, humble hearts, and believing hearts.”

When Elder Bednar thinks of his visit to the Philippines, he said he will remember the faith and resilience of the members and the gratitude he learned from them. He will see all these lessons in the face of a little girl he met outside of the Church’s MTC in Manila. She held up five fingers to help him understand her age. At that moment Elder Bednar was “so much thankful.” 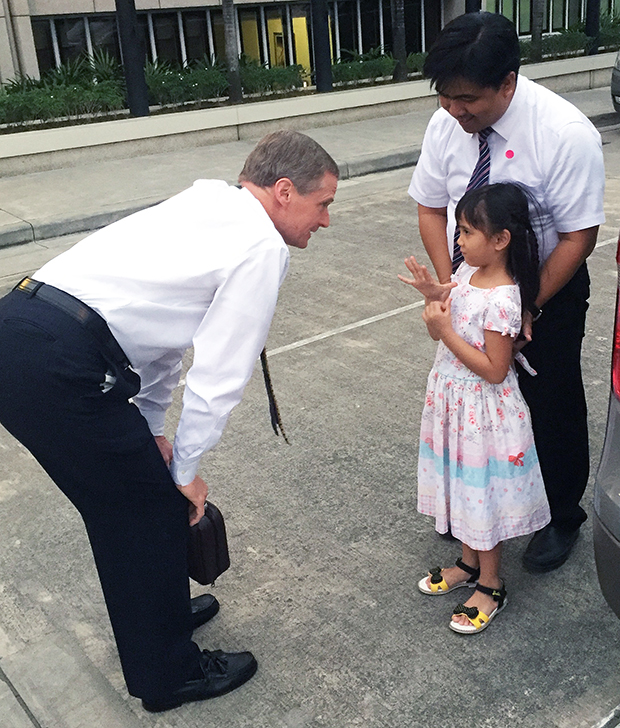 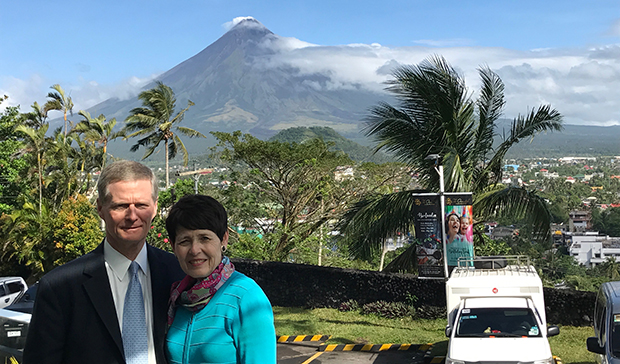 Elder David A. Bednar and his wife, Sister Susan Bednar, in the Philippines in February 2017. 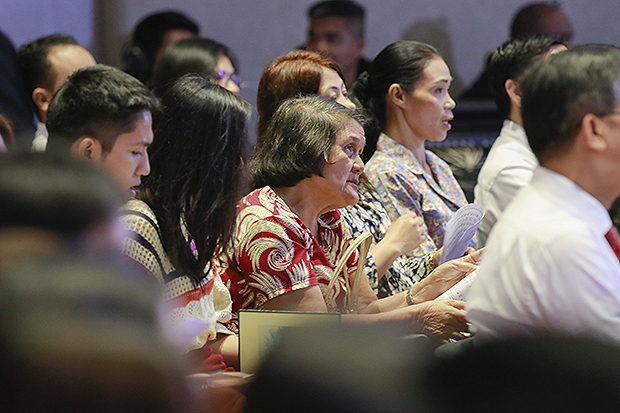 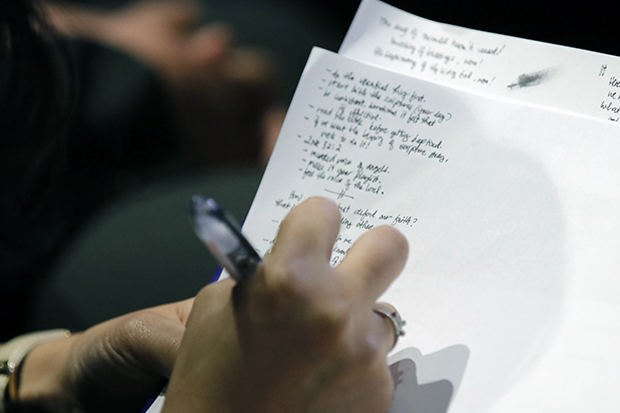 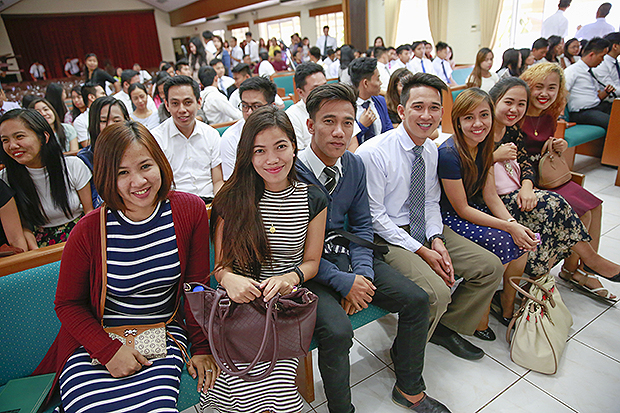 Church Members in Laoag, Philippines, gather to hear Elder David A. Bednar speak during his recent trip in February 2017. 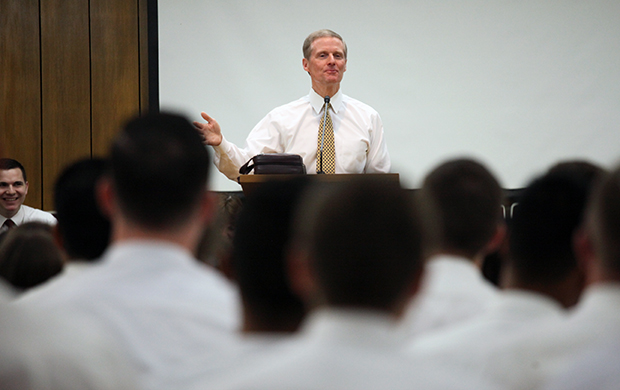 Elder David A. Bednar speaks to missionaries from the Manila Philippines Mission in February 2017.