Family History Work Is about People 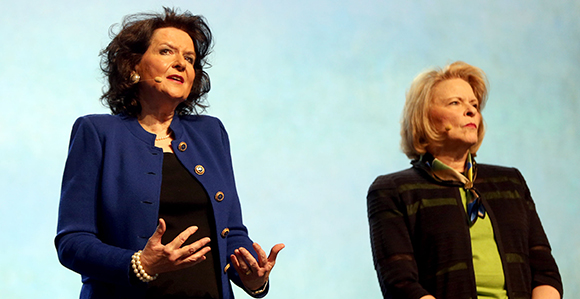 “This work is all about people. It’s about giving every one of our Heavenly Father’s sons and daughters the chance to make covenants and receive saving, exalting ordinances. It’s all about helping His children return home to Him.” —Sherri Dew, executive vice president of Deseret Management Corporation

Close friends—Sister Wendy Watson Nelson, wife of President Russell M. Nelson, President of the Quorum of the Twelve Apostles, and Sheri L. Dew, executive vice president of Deseret Management Corporation—offered themselves as exhibit A and exhibit B in regards to family history work during the Family Discovery Day family history discussion on Saturday, February 6.

Sister Nelson, as exhibit A, is an avid, enthusiastic family history researcher who has gifted her friend with a worldwide membership to Ancestry.com for Christmas and researched and submitted names from within Sister Dew’s family tree as a surprise for her birthday—all in an effort to try to interest her in family history work.

Watch the full video of their discussion

Sister Dew, as exhibit B, said Elder Dale G. Renlund’s challenge earlier in the day to find as many names for the temple as ordinances performed in the temple “pricked my conscience.”

“For decades now, the temple has been my lifeline. I love the temple and years ago I decided that I needed to be in the temple at least once a week, but when it comes to family history research, I’ve been a slacker,” Sister Dew confessed. “And I shouldn’t be.”

“And yet, even with my grandmother’s amazing example and her testimony ringing in my ears decades later, I’ll confess that I did more family history research before I was 11, which is when she died, than I’ve done since,” Sister Dew said. “Believe me, it hasn’t been for a lack of interest, and it’s certainly not been without plenty of guilt.”

Sister Dew noted that Sister Nelson used to also be a “slacker” but then something changed for her.

Sister Nelson then explained that she too was influenced by her grandmother, Hazel Marie Rosenberg Kunz McLean, who bequeathed to her granddaughter boxes of genealogy before she died.

“And the truth is that if I ever wanted to have a really good nap, all I needed to do was think of delving into those boxes,” Sister Nelson said.

Her attitude began to change, however, when she heard Elder Richard G. Scott’s October 2012 general conference address, “The Joy of Redeeming the Dead.”

“I was so taken with his message that I studied it more than 100 times in two months,” Sister Nelson recalled. “I could not get enough of his talk. It felt so personal. I felt like he was talking directly to me—and allowing 15 million others to listen in.”

Sister Nelson said she felt led to do several things, including to work in silence and to create a spiritual environment in a storage room in her basement. “Working in silence in such an environment led me to pray: ‘Please lead me to those who are ready to make covenants with Thee and receive their ordinances.’ That prayer opened the heavens for me and helped me feel which branches, limbs, and sometimes even twigs I should pursue.”

Sister Nelson said she also believed Elder Scott when he said, “Can you see that you don’t have to be a genealogist anymore?”

“Whenever I hit a tough spot, a dead end, in my research, and wish I had more genealogical skills, I remind myself, ‘Wendy, you don’t have to be a genealogist.’”

When Elder Scott taught that “some sacrifice” would be needed and counseled individuals to “set aside those things in your life that don’t really matter,” Sister Nelson believed him but wondered what she could possibly “set aside.” 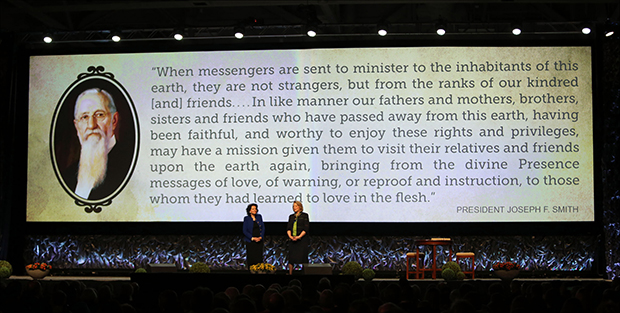 “And then I remembered the time I spent by myself, playing Scrabble on my iPad,” Sister Nelson said. Not sure how much of a difference it would make, she nevertheless committed to set it aside for two months.

Using personal experiences as well as recorded interviews with friends and family, Sister Nelson shared lessons she’s learned from engaging in family history research, including that those on the other side are very much alive. They are eager for their ordinances to be performed, and when the Lord knows individuals are serious about family history, other people show up to help.

Sister Nelson said she has also learned “that family history research is fun, even more fun than Scrabble, more fun than anything I used to do to have a little ‘R&R.’”

Sister Dew continued, “What we are really saying today is that the combination of family history and temple work has a unique power to build faith and testimony because, when all is said and done, this work is all about people. It’s about giving every one of our Heavenly Father’s sons and daughters the chance to make covenants and receive saving, exalting ordinances. It’s all about helping His children return home to Him.”

Sister Nelson promised, “Family history work will bring miracles to your life and to the lives of those you love.”

In conclusion, Sister Nelson shared her testimony that “family history and temple work is the Lord’s work. We know He can do His own work, so just think of how generous He is to let us participate.”

Sister Dew concluded by sharing her love for the temple. “I have admitted today that I’ve been a slacker about family history, but I have not been a slacker about temple worship and temple service. The pressures and disappointments of my life would have crushed me long ago if it weren’t for being in the temple—a lot.”

Sister Dew said she has loved helping her dear friend’s family in the temple, “but I know that the temple would mean even more to me if the names were from my own line.”

Sister Dew, before thousands of witnesses in attendance at the discussion, accepted the challenge extended by Elder Renlund to find as many names for the temple as ordinances performed in the temple.

“There may be some of you who are slackers too,” Sister Dew said. “And not because you’re not deeply committed to the Lord, but just because you haven’t figured out how to make it fit, like I haven’t. So my question today is, Will you join me? Will you accept Elder Renlund’s challenge to find as many names as ordinances you perform?”