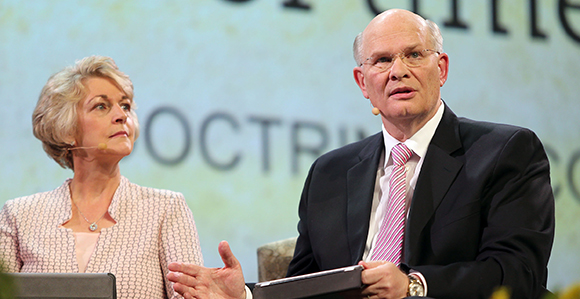 “The real power comes when we combine family history with the blessings of the temple.” —Elder Dale G. Renlund of the Quorum of the Twelve Apostles  Busath.com

Sharing a story about his grandmother’s spiritual course through life, Elder Dale G. Renlund of the Quorum of the Twelve Apostles explained the power of combining family history with the blessings of the temple. “It is not just randomly mixing two things together, but the one helps direct the other,” he said.

Elder Renlund was joined on stage during the opening session of the 2016 RootsTech Family Discovery Day by his wife, Sister Ruth Lybbert Renlund, and their daughter, Sister Ashley R. Renlund. Together the family looked through a photo album and invited the thousands in attendance to join them on a family history journey.

In 1917, Leander died of tuberculosis when Sofia was pregnant with their 10th child. “It was a difficult struggle for her, an impoverished peasant woman, to keep what remained of her family intact,” Elder Renlund said. “For nearly two decades, she did not get a good night's rest. She hustled at odd jobs during the day to scrape together enough food to eat. At night, she nursed dying family members.”

He described meeting her in 1963, after his father, Mats Ake Renlund, a native of Finland who had immigrated to Salt Lake City, was called to serve as a building missionary in Sweden, Norway, and Finland. During that time the family visited Lena Sofia on Larsmo. “I had just turned 11 and she was 87. She was stooped from a lifetime of hard labor. She was so bowed over that when she stood from her chair, her height did not change. The skin of her face and hands was weather-beaten, as tough and textured as worn leather. She stood as best she could and pointed to a photo of Leander on the wall and said to me, in Swedish, ‘Det här är min gubbe’—this is my hubby.”

Thinking that his grandmother had spoken incorrectly, Elder Renlund wondered why his grandmother used the present tense when speaking about her husband, who had died 46 years earlier. Later in life, with a gospel perspective, it made sense. “I believe there are so many messages the Lord has given to us about working with our family history, and throughout my life I have been able to learn and connect to the example of my family.”

Ashley Renlund spoke about her Aunt Anita, “an explosives expert, a fabulous teacher, and our family's real rocket scientist,” and then explained how the history of explosives reminded her of how Latter-day Saints can combine gospel elements together to make them stronger. She said nitroglycerin was a powerful explosive but extremely unstable. However, when combined with kieselguhr, a stabilizer, it became dynamite, a tool that literally changed the world. “Dynamite wasn’t the discovery of a new material, but it involved putting two known materials together to make them safer, more effective, and more useful.”

Analyzing what his daughter had explained and then relating it to the gospel, Elder Renlund said, “Think about the strength and comfort Lena Sofia must have gained from knowing about the sealing power! But the power is given direction as we research and learn from our ancestors.” 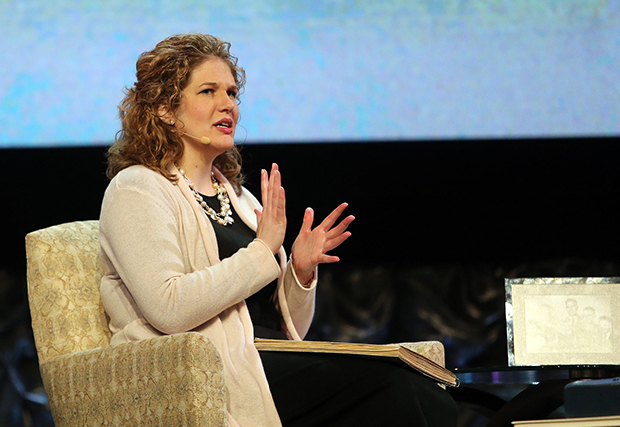 Expounding on the thought further, Sister Ruth Renlund shared a scripture from Doctrine and Covenants 2:3, which tells of how the Lord would send Elijah to plant the promises made to fathers in the hearts of the children. “So even if we had all the genealogical records the world could offer and all that we could possibly collect, without the sealing authority restored by the prophet Elijah, the purpose of the creation would have been thwarted and wasted,” she said.

“Yes, the temple ordinances are like nitroglycerin—pure and powerful,” said Sister Ashley Renlund. “But I can see how, when you add the temple to the work of studying and learning about your ancestors, the power is greater and takes our blessings to the next level.”

Elder Renlund said that his grandmother was trying to teach this principle by what she said about her husband. “Lena Sofia knew that her long-dead husband was and would remain hers through the eternities. Through the doctrine of eternal families, Leander remained a presence in her life and part of her great hope for the future,” he said.

“In a blazing affirmation of her faith in the sealing authority, in 1938 Lena Sofia submitted the family records for her deceased children who were over 8 years of age when they died,” said Elder Renlund. “That way, their temple work could be performed, although she herself would not get to the temple during her lifetime.”

Elder Renlund then asked his wife and daughter if they remembered the temple challenge given by Elder Neil L. Andersen two years ago at RootsTech. Quoting Elder Andersen, his daughter said, “Prepare as many names for the temple as baptisms you perform in the temple.” And Sister Ruth Renlund said that last year Elder Andersen added, “And help someone to do the same.” 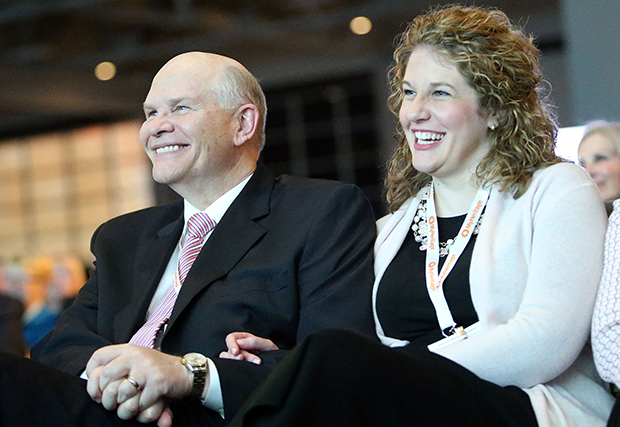 “Exactly,” said Elder Renlund. “But I’ve been thinking more about this challenge, and this apostolic temple challenge can continue to grow this year. In light of our conversation, I believe we can add an element of spiritual power to this promise.”

They then read together from chapter 47 of Ezekiel where it describes how the waters of a growing river bring life and healing. “And it [came] to pass, that every thing that liveth, which moveth, whithersoever the rivers come, shall live … for they shall be healed; and every thing shall live whither the river cometh” (verse 9).

“The growth of the river is similar to the exponential growth of our family through the generations,” said Elder Renlund. “The Lord has a plan to overcome Lena Sofia’s personal misfortune, our loss, your tragedy—in fact, everyone’s calamity. He restored to the earth His priesthood and His sealing authority. Lena Sofia knew that.”

In about 1966, shortly after Lena Sofia’s death, her daughter-in-law Mariana—Elder Renlund's mother—took her name to the Genealogy Department of the Church. “The man behind the counter told her that Church policy stated that someone had to have been dead for at least a year before temple work could be done for that person,” Sister Ashley Renlund said. “Grandma replied, 'I don’t like that answer. Let me talk to someone who can give a different one. She’s waited long enough.'”

Less than two months later, with permission from the President of the Church, Lena Sofia’s temple work was completed. “And did you know that now it is Church policy that a person who has not been able to enjoy the blessings of the temple because of distance doesn’t have to wait a whole year?” said Elder Renlund. “That way, others like Lena Sofia can receive those blessings as quickly as possible.”

“It’s the culmination of family history and temple work coming together, igniting this power we have talked about today,” said Sister Ruth Renlund.

Elder Renlund added his own voice as a testimony and broadened the scope of the apostolic temple challenge and issued a promise: “Brothers and sisters, I promise you protection for you and your family as you take this challenge to ‘find as many names to take to the temple as ordinances you perform in the temple, and teach others to do the same.’” 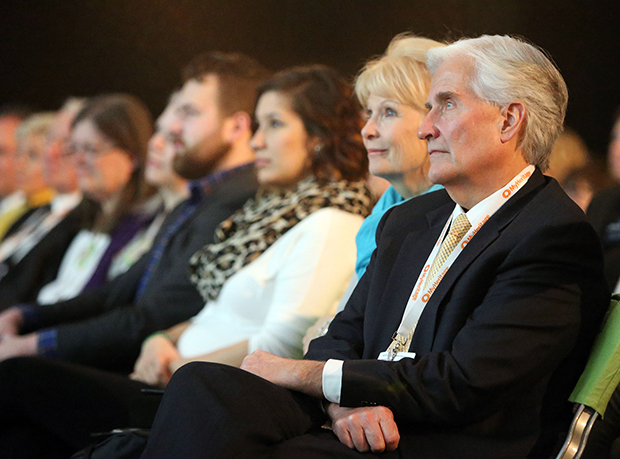 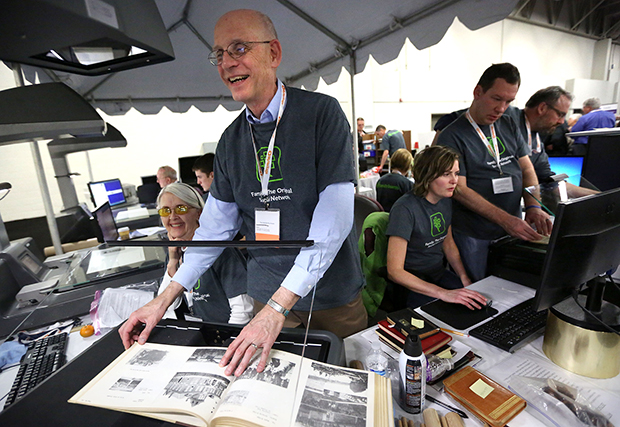 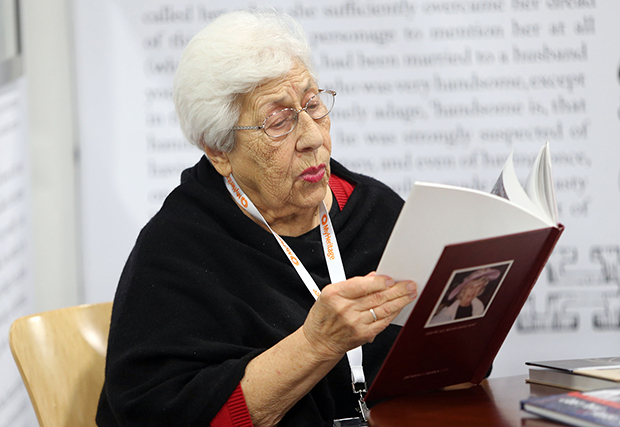 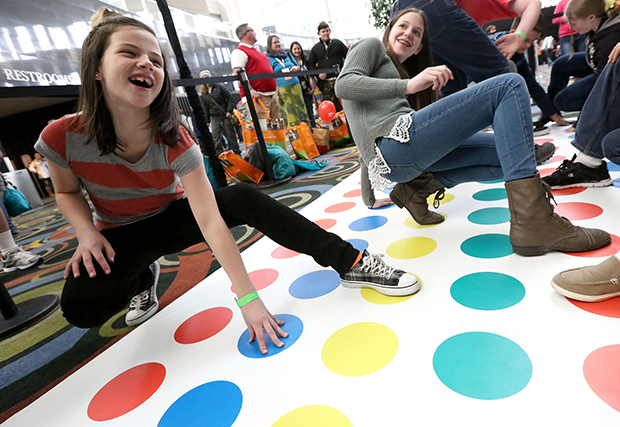