Elder Scott D. Whiting: Fixing Your Eyes on the Prophet 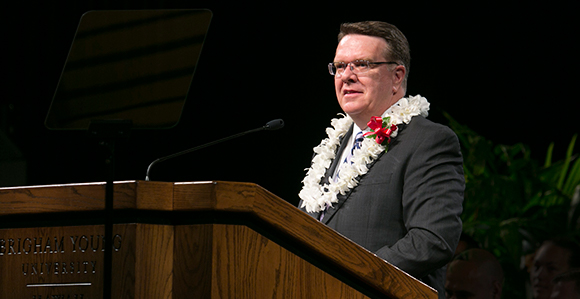 “We fix our eyes on the prophet by sustaining him.” —Elder Scott D. Whiting, General Authority Seventy

Elder Scott D. Whiting, General Authority Seventy, spoke on the importance of the Lord’s prophets at a BYU–Hawaii devotional on September 27.

Parable of the merry-go-round

Elder Whiting began by recalling a childhood playground with a man-powered merry-go-round. “I would watch kids playing and laughing and having a good time. Every now and again, I would give it a go only to end up feeling sick, dizzy, and miserable,” he said. “The only way that I could even remotely enjoy the merry-go-round was if I were to stand in the middle as it spun and constantly adjust my footing so that I could keep eyes fixed on a certain object. The moment that I stopped looking at that object, I would quickly become disoriented, dizzy, and nauseated.”

This merry-go-round served as a metaphor for the state of the world today. “As we read the daily news reports from across the world, we see unspeakable acts of violence and moral degradation, the erosion of religious liberties, and a systematic assault on the family in nations across the world,” Elder Whiting said. “Just like the merry-go-round on the playground, this spinning of the world can cause us to lose our balance and become disoriented.”

The fixed object that Heavenly Father has provided for His children to focus on “is His living prophet and apostles on the earth today,” Elder Whiting said.

He quoted the Guide to the Scriptures, found on ChurchofJesusChrist.org, which defines a prophet as “a person who has been called by and speaks for God. As a messenger of God, a prophet receives commandments, prophecies, and revelations from God.”

Elder Whiting further explained: “Prophets stand firm in the face of wickedness and denounce it when it rears its head. It has been so from the beginning. It is so today, and it will be so in the days to come. They are fixed objects. They are steadfast and immovable by very definition.”

Scriptures and prophets have taught that “God, just like His prophets, is steadfast and immovable (see Mosiah 5:15),” Elder Whiting said. “When has God or His Son, Jesus Christ, ever changed an eternal truth to conform to societal trends or, for that matter, any other reason? It is wholly inconsistent with the nature of God.”

Elder Whiting recognized that eternal truths are not necessarily “easily understood or readily accepted, even by sometimes the most faithful.” Mortals don’t know the mind of God, and at times, His truths can conflict with personal circumstances or deeply held feelings.

“Throughout the history of man, it has always been and remains so today that man is the one that needs to change in order to align himself with God, not the other way around,” Elder Whiting said. “We must keep our eyes fixed on prophets and adjust and change our footing as the world spins around us in order to keep from becoming disoriented and losing our way. As we change, as we fix our eyes on prophets, there is safety and peace.”

Elder Whiting said, “As a husband and father, I have found great peace in following the counsel of the prophet. While I am certainly not perfect in either role, I’m improving my performance by listening to and applying counsel given by the prophet.”

Buying a suit in Hawaii

He shared an experience he had as a young bishop in Hawaii when he needed to buy a new suit. Department stores selling such clothing were few and far between. At one store, he found one suit in particular that “drew a compliment from my wife when I tried it on. That was all I needed to hear, and I was ready to buy it,” he said. On closer inspection he discovered that the suit had three buttons. “To that day, I did not recall seeing a prophet wearing a three-button suit. So I put the suit back on the rack and we left empty-handed.”

A few weeks later, he received a copy of the Church News with a picture of President Gordon B. Hinckley on the cover. “I studied the picture closely and discovered that he was wearing a three-button suit,” he said. Naturally Elder Whiting returned to the department store and bought the suit.

“Now, I know that it sounds silly and a bit extreme,” Elder Whiting said. “However, it was and still is important to me that I fix my eyes on prophets in all things. I was a bishop. I was representing the prophet to the beloved youth of my ward. I wanted them to see in me what they saw in the prophet. I did not want to stand out as being different from him.”

“We fix our eyes on the prophet by sustaining him,” Elder Whiting said, giving three ways to do so.

“First, we pray for him. We pray that he may have good health and strength, that he will be able to receive and deliver the word of God to us.

“Second, we listen to him and we study his words. We will have the opportunity to listen this weekend and then to study his words in the weeks following general conference.

“And third, we follow the prophet’s counsel. Exercise your faith. Call upon your Heavenly Father for help. Repent when you need to. And change your footing to keep your eyes fixed upon Him.” 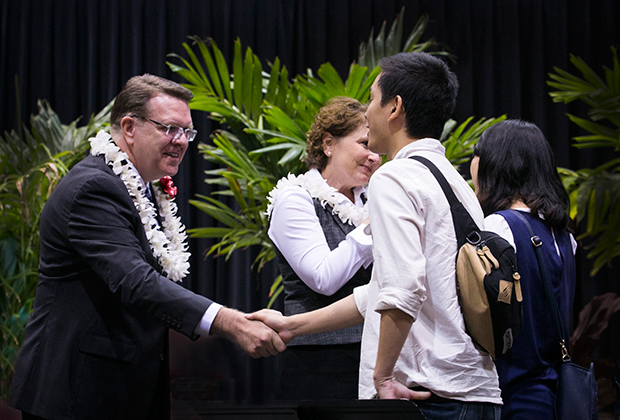