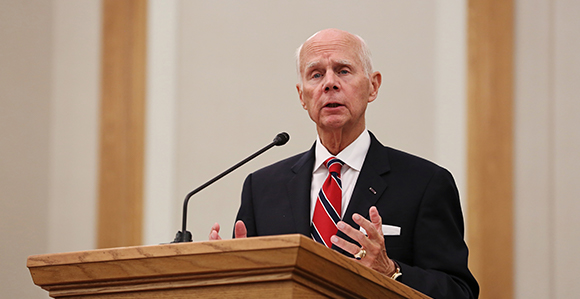 Elder Elder Lance B. Wickman asks members to be better informed and more involved in the religious freedom discussion.

“My message today is to reassure all of us who feel intimidated or overstretched or who question whether we can make any real difference. The answer is that there is much we can do right in our own communities as we go about our daily lives.” —Matthew Richards, attorney at Kirton McConkie

All must engage in the “hard work of citizenship,” Elder Lance B. Wickman, Emeritus General Authority Seventy and the Church’s chief legal adviser and a member of the Church’s general counsel, said during the U.S. Religious Freedom Conference held in Colleyville, Texas, on September 10.

During the event, speakers, including Elder Dallin H. Oaks, discussed the topic of religious freedom and encouraged listeners to become better informed and participate in the conversation.

Elder Wickman spoke of the Constitution of the United States, the “most remarkable framework of government ever forged, set forth in the most hallowed document of its kind ever to issue from the pen of man.”

Elder Wickman spoke of the struggle that went into the creation of the Constitution.

“The so called ‘united’ states were anything but united!” Elder Wickman said. “In fact, the men who came together in Philadelphia that hot summer acted largely behind a shroud of secrecy. Officially, they had assembled to amend the ineffective Articles of Confederation. However, once together they set to work to fashion an entirely new document out of whole cloth, as it were.”

In the challenging season facing Church members today, “all of us—each and every one—must stand for the Constitution—not as political partisans, but as citizens engaged in the processes of government in order to defend our religious liberty,” he said.

Sharing two essential points, Elder Wickman said, “The Constitution itself, though inspired by heaven, was the product of hard work by men who sensed a destiny in this country and were devoted to it and who worked to find compromises that benefited the common good. …

“And, second, particularly important for our purposes this evening, the very Constitution they established requires us—‘we, the people’—to do the hard work of citizenship that is necessary to protect and preserve rights so painfully established.”

Elder Wickman spoke of the most important freedoms to protect—“those that relate to private and ecclesiastical contexts, or are part of the rights of all citizens”—and spoke of the greater pragmatism and compromise that come with other freedoms involving commercial and governmental settings.

All must “engage in the struggle” as Church members and citizens as they actively participate in religious freedom discussions.

In his portion of the conference, Alexander Dushku, a lawyer with the firm Kirton McConkie, spoke about basic religious freedom issues and how to become better informed.

He announced the new website to help Church members become informed and involved as threats come their way. The online content includes talks from Church leaders, videos, articles, inspirational quotes, and resources to help people better understand and participate in the ongoing dialogue around religious freedom.

“My message today is to reassure all of us who feel intimidated or overstretched or who question whether we can make any real difference,” said Matthew Richards, an attorney at Kirton McConkie. “The answer is that there is much we can do right in our own communities as we go about our daily lives.”

Drawing from the Book of Mormon when Alma taught his son Helaman, Brother Richards noted that through “small and simple things are great things brought to pass” (Alma 37:6).

“You don’t need any special training, you don’t necessarily need to run for political office or become a lawyer or dedicate all your time and resources,” he said. “We don’t need to wait for a special call from the prophet. All we need is a willingness to study up on the issues, open our mouths to coworkers, classmates, and friends in appropriate ways. Get involved in our communities and neighborhoods. Be examples of the Savior’s teachings.”

“All of us are going to have … moments, perhaps many in our lifetime, when we will need to find the courage to speak up,” said Hannah Smith, senior counsel at the Becket Fund for Religious Liberty. “As we prepare to know what to say, the Church has prepared this wonderful new religious freedom website where we can educate ourselves on the issues, where we can become up to date to what’s current in religious freedom, and it can help us engage more meaningfully in this dialogue.”

“We should not enter a conversation with the intent to win a debate,” she said. “Rather than trying to shut the other person down, we should seek to find common ground and to understand where the other person is coming from.”

“Even when you are trying to understand others and are showing them respect, they may not always respond in kind,” she said. “When others aren’t willing to reciprocate, the best approach may be to change the subject or with a friendly parting simply walk away.” 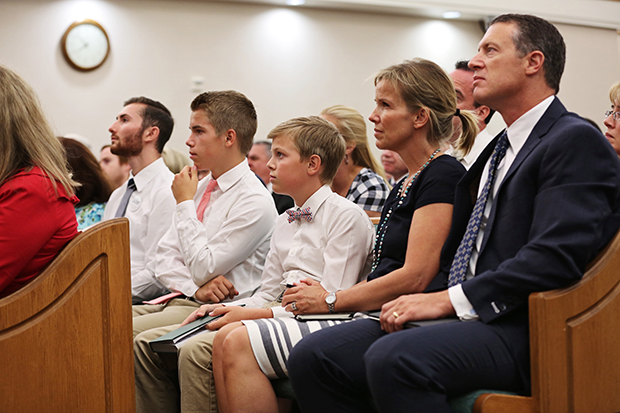 Church members listen as Elder Von G. Keetch of the Seventy asked members to consider “how you can best firmly teach and defend the doctrine of the gospel of Jesus Christ, while at the same time showing love, kindness, and understanding to a person who may not accept that doctrine.” Photo by Joe Torma. 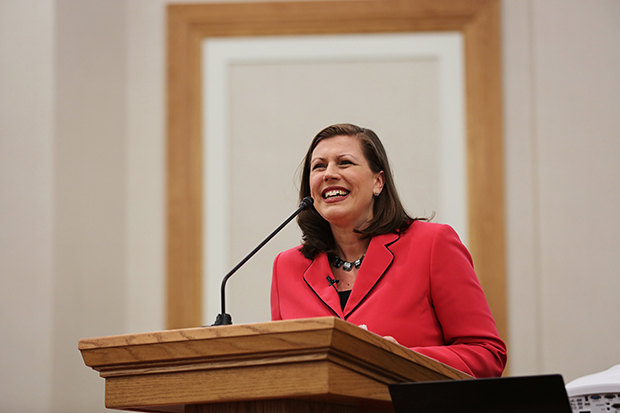 Hannah Smith, senior counsel at the Becket Fund for Religious Liberty in Washington, speaks during a special religious freedom conference in the Dallas, Texas, area on September 10. Photo by Joe Torma. 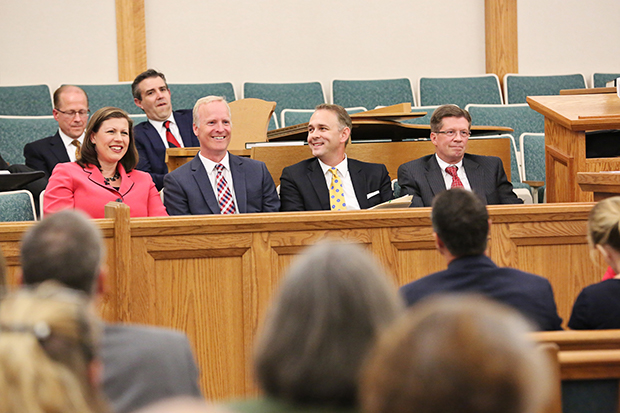 Elder Dallin H. Oaks of the Quorum of the Twelve Apostles was the keynote speaker during a religious freedom conference for Church members in 25 stakes in the Dallas area on September 10. Other conference participants included Alexander Dushku and Matthew Richards (both of whom are attorneys in Salt Lake City) and Hannah Smith, senior counsel at the Becket Fund for Religious Liberty in Washington. Photo by Joe Torma.