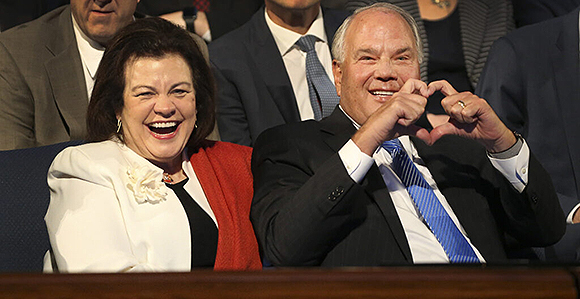 Elder Ronald A. Rasband of the Quorum of the Twelve Apostles and his wife, Sister Melanie Rasband, show their love to attendees prior to speaking during a Brigham Young University devotional at the Marriott Center in Provo on Tuesday, January 21, 2020. Photo by Jeffrey D. Allred, Deseret News. 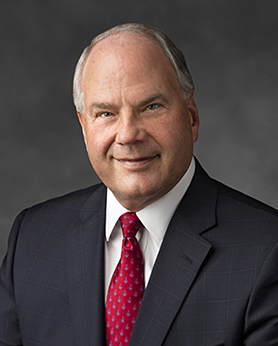 “We, as members of the Church, must recognize that the erosion of religious freedom will significantly impact our opportunities to grow in strength and gospel knowledge, to be blessed by sacred ordinances, and to rely on the Lord to direct His Church.” —Elder Ronald A. Rasband

During his life, Elder Ronald A. Rasband has visited 138 countries in his business career and Church assignments and has noted that not everyone in the world has the same freedom of choices that people in America enjoy.

“I have seen societies where individuals have little choice and little personal growth and opportunities to worship are few,” said the member of the Quorum of the Twelve Apostles. “There are countries where religion is limited by government edict and where personal choices in worship are nonexistent.”

Addressing the fundamental doctrine of agency in a January 21 devotional at Brigham Young University, Elder Rasband invited thousands of students gathered in the Marriott Center to make a difference and be an “example of the believers.”

The plan of happiness was hinged upon agency—the ability to choose between good and evil—before anyone came to the earth, he said. Everyone who has come to the earth chose Heavenly Father’s plan and to come to earth and receive a body.

“We committed to live the commandments that we might be worthy of eternal life, the greatest of all God’s blessings. Central to our Father’s plan was the mission of Jesus Christ and His Atonement that makes it possible for us to repent and be forgiven and recommit to the covenant path.”

Each person has the agency to look beyond the immediate struggles of mortality and to the joy and redemption that come because of the Atonement of Christ.

Even the Atonement was a choice made by Jesus Christ, who pled, “O my Father, if it be possible, let this cup pass from me: nevertheless not as I will, but as thou wilt” (Matthew 26:39).

“At that crucial moment, He submitted His will, His precious agency, to the Father that the plan of happiness might go forward,” Elder Rasband said.

Agency depends on robust religious freedom—something that Satan tried to destroy in the preexistence and is still trying to destroy today.

“We, as members of the Church, must recognize that the erosion of religious freedom will significantly impact our opportunities to grow in strength and gospel knowledge, to be blessed by sacred ordinances, and to rely on the Lord to direct His Church.”

Elder Rasband then addressed three keys to freedom of religion. 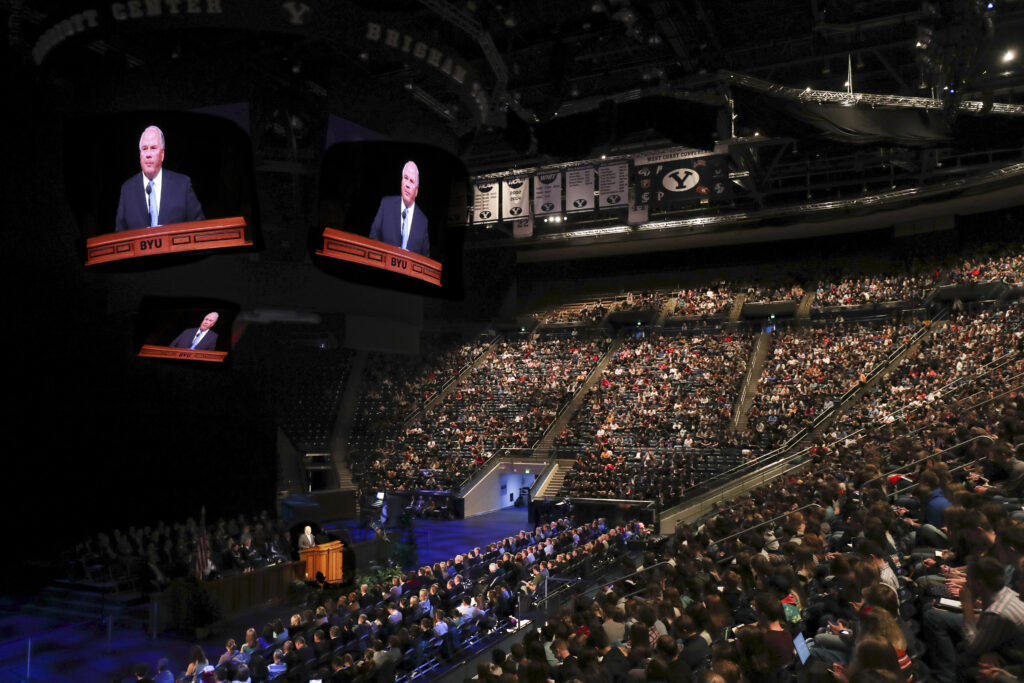 Elder Ronald A. Rasband of the Quorum of the Twelve Apostles and his wife, Sister Melanie Rasband, show their love to attendees prior to speaking during a Brigham Young University devotional at the Marriott Center in Provo on Tuesday, January 21, 2020. Photo by Jeffrey D. Allred, Deseret News.

“The Freedom to Believe”

No one should be forced to compromise what they believe because others think another way or be required to live according to another’s beliefs, Elder Rasband said. “Because of freedom of religion, I can stand here today and tell you what I believe.

“I believe in Jesus Christ, and I have complete faith in Him. Because of the Savior’s Atonement, it is possible for you and me to repent and move forward on the covenant path, clean and pure, with our hearts fixed on eternal life.”

Elder Rasband then asked the students what they believe. “How are you exercising your agency to further the work of the Lord?”

“The Freedom to Live Our Religion, Worshipping as We Desire”

Members of the Church have chosen to make covenants when they enter the waters of baptism and take the sacrament each week and have chosen to “take the Lord’s name upon us,” Elder Rasband said. “When we choose to take His name upon us, we commit to join His legion of valiant, righteous servants focused on God’s plan.”

BYU has an honor code that reflects each person’s freedoms and accountability, and freedom of religion allows the students to attend this school, “unique in all the world for its balance of secular and spiritual knowledge,” Elder Rasband said. Freedom of religion also means that each Latter-day Saint is free to attend the temple, be sealed as a family, teach gospel principles in his or her home, and pray to God.

“The question then is, How are you exercising your freedom to worship the Lord in these latter days?” 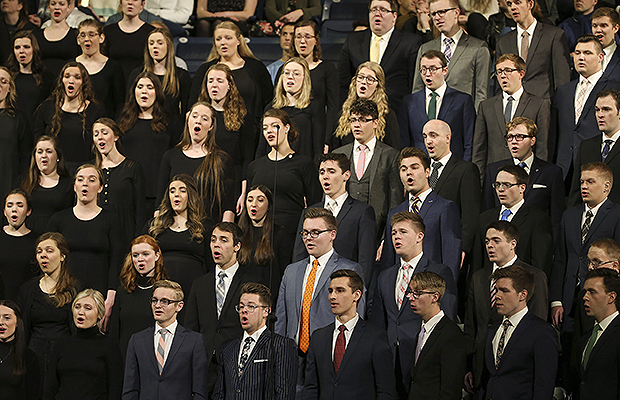 Attendees listen to Elder Ronald A. Rasband of the Quorum of the Twelve Apostles as he speaks during a Brigham Young University devotional at the Marriott Center in Provo on Tuesday, January 21, 2020. Photo by Jeffrey D. Allred, Deseret News.

President Russell M. Nelson has called for every Latter-day Saint to enlist in the great cause of gathering Israel. Elder Rasband quoted the prophet’s 2018 worldwide youth devotional, saying, “There is nothing happening on this earth right now that is more important than that.”

Elder Rasband’s audience included the many students and others who have served missions for the Church and borne witness of what they believe to others. “You understand what it feels like to help others recognize the Spirit that they, too, might come unto Christ.”

College students can be gathering people to the gospel in many ways, Elder Rasband said. He suggested that they begin by being an example of the believers and choosing to exemplify what they believe.

“You can be an example of one who follows the prophet, who loves him and prays for him. He is, I testify, a man of God, and like Jesus Christ, he goes about doing good.”

Elder Rasband shared the story of Dimitri Tray, whom he called an “example of the believers.” Elder Rasband’s son met Tray, a young Muslim man who chose to be baptized, while serving a mission in Kazakhstan. While on assignment for the Church in Russia 15 years later, Elder Rasband met Tray in Moscow, and they were able to FaceTime with his son—“and what a reunion it was for those two,” he said.

More than 20 of Tray’s friends and family in Kazakhstan and Russia have chosen to join the Church because of his example, Elder Rasband said. “Dmitri and those he has brought to the gospel are gratefully engaged in following the Savior.”

Elder Rasband asked his listeners to think for a moment about who they are influencing and helping to gather to Israel and the gospel. “How can you reach out and do more?”

Religious freedom is central to worship and the work needed in the kingdom of God, he said.

As an example, Elder Rasband spoke about a couple of the assignments he has had as an Apostle and a director of the Church Communication Department and the Government Relations Committee of the Church.

He joined Her Excellency Hunaina Al Mughairy, ambassador of the Sultanate of Oman, at the Washington D.C. Temple lighting ceremony in December 2019. “We are of different religions, the ambassador and I, but we are friends sharing common purpose to lift those around us,” he said.

In October 2019, he met with government leaders and participated in humanitarian visits in Phoenix, Arizona. As thousands of asylum seekers have arrived in the Phoenix area with next to nothing, 40 different faith and community organizations have come together to help rescue them. “What a privilege to work side by side with others who are following the Lord’s admonition to care for the poor and needy.”

Every person can make a difference and show God’s love to His children no matter their circumstance, Elder Rasband said. He announced that at the end of the devotional, a post would be shared on his Facebook and Instagram accounts with the invitation for users to “share what you are doing to minister to those who need you. I check my posts regularly and would love to hear of your efforts.” 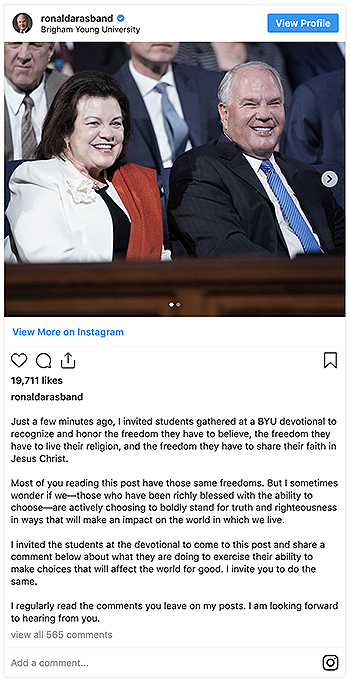 The topic of freedom of religion is an important and interesting one, he said. “I like hearing about when [Church leaders] can work with members of other faiths, to work together on our common issues so we can secure freedom of religion for everybody.”

Josh Wide, also a sophomore at BYU, also sees the importance of Church leaders defending religious freedom, but also his own opportunities. “I usually feel like that’s the general consensus that I get whenever I’m open about my religion and not in a pushy way or anything; I get to know people and their beliefs. It’s really a great experience to get to know other people’s cultures and their beliefs.”

“We have the ability to choose to share the message of Christ, and . . . we need to use that more,” Smith said. “Our place in this work and the gathering [of Israel] is very crucial and important.” 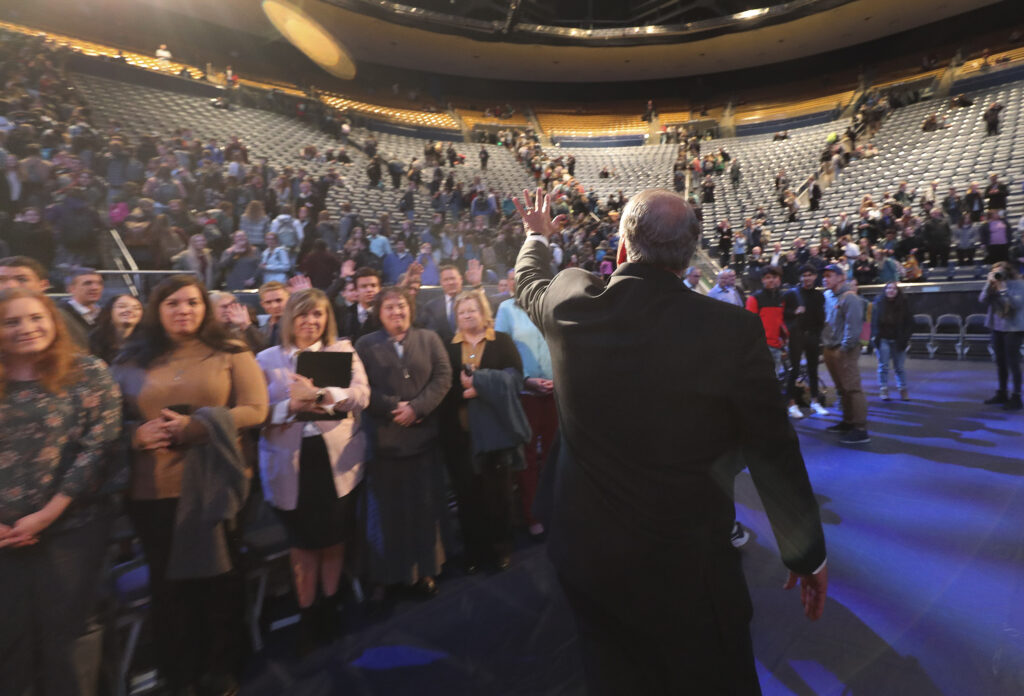 Elder Ronald A. Rasband of the Quorum of the Twelve Apostles speaks during a Brigham Young University devotional at the Marriott Center in Provo on Tuesday, January 21, 2020. Photo by Jeffrey D. Allred, Deseret News.