Elder Adrian Ochoa speaks with Father James Misko, Vicar General of the Catholic Diocese of Austin, during a visit to the Pastoral Center with Elder Ulisses Soares on October 18, 2019.

Placing their hands on one another’s shoulders and calling each other “brothers in Christ” mere moments after meeting for the first time, two prominent faith leaders of differing denominations demonstrated the power of uniting together for a common goal.

On Friday, October 18, Elder Ulisses Soares of the Quorum of the Twelve Apostles of The Church of Jesus Christ of Latter-day Saints and the Very Reverend Father James Misko, vicar general of the Diocese of Austin of the Catholic church, met together at the Diocese’s pastoral center in Austin, Texas, to discuss matters concerning human dignity.

“We recognize each other as creations of God and this is a chance for us to not only welcome each other and get to know each other, but to continue to work together for this dignity of the human person,” said Father Misko, following a brief introductory meeting with Elder Soares and other Church leaders.

Focusing on a shared initiative to help immigrants after coming to the U.S., the faith leaders met to discuss the work of two—soon to be three—newly formed welcome centers sponsored by the Church, one of which is hosted at Catholic Charities of Central Texas in Austin.

“We know that the dignity of the human person is one of the most important tenets of all of our faiths, so we’re happy to partner with you on that by helping people who are in need,” Father Misko said to Elder Soares.

The welcome centers, which the Church is establishing as part of their ongoing efforts to help respond to the needs of immigrants—both their immediate needs upon arriving as well as their long-term needs in adapting to new communities and systems for medical care, education, law, etc.—offer a variety of much needed services for immigrant populations, explained Elder Villareal.

Elder Ronald A. Rasband visits a welcome center the Church and its partners established in Austin that focuses on responding to the needs of immigrants.

Additionally, the same day that Church leaders were meeting with Catholic leaders in Austin, Elder Ronald A. Rasband of the Quorum of the Twelve Apostles was meeting with government leaders in Phoenix, Arizona, to discuss similar efforts there and to visit a different type of welcome center for asylum seekers.

Elder Rasband met with Arizona Gov. Doug Ducey on Friday and later met with U.S. Sen. Martha McSally, R-Arizona, in her office in Phoenix to discuss the needs of asylum seekers and refugees, among other topics. 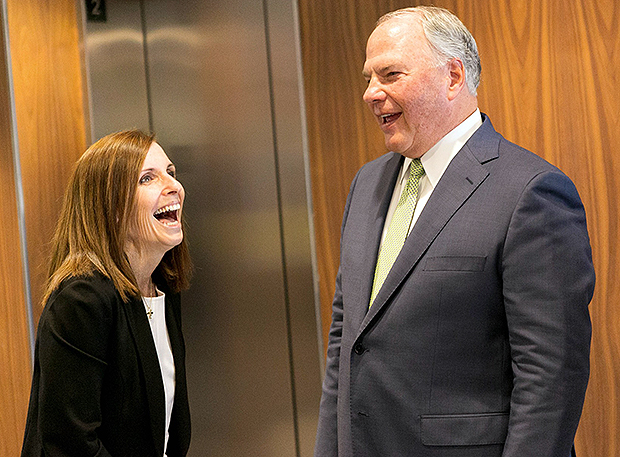 Elder Ronald A. Rasband of the Quorum of the Twelve Apostles has a light moment with Arizona’s newest senator, Martha McSally during a visit to her office on Friday, October 18, 2019.

At the meeting, Michelle Curry, a local public affairs representative for the Church in the Phoenix area shared details of a coalition of 40 churches and a number of non-profit organizations working to help support some 48,000 asylum seekers released by Immigration and Customs Enforcement into the Phoenix area over the last 12 months. Curry asked McSally for her support in the coalition’s ongoing efforts.

Joining in the efforts of the coalition, the Church contributed at least $40,000 worth of goods from the bishops’ storehouse in addition to a number of large Deseret Industries grants which allowed other churches in the coalition to shelter asylum seekers. The coalition—with the help of many community volunteers, including members of the Church—works to provide necessary resources for asylum seekers who would be without shelter, food, and clothing during the time between their initial ICE interviews and their court hearings regarding whether they will be granted asylum.

Of the work the coalition has done, Sarah Eary, community integration manager for Lutheran Social Services Southwest, said, “We fed, clothed, sheltered, and transported 48,000 people in a year and nobody in Phoenix missed a meal.” She later added, “It was a miracle of hard work.”

During his visit, Elder Rasband took the opportunity to visit the new welcome center for asylum seekers, located in an old school, that the Church helped the coalition open.

Speaking at the welcome center for asylum seekers, Elder Rasband said, “We came here today to thank you. This is exactly what the mission and focus of our Church is, to care for the poor and needy, to reach out to all of Heavenly Father’s children, to show love and compassion like you have. Thank you for your kind expressions to us and know how deeply we feel about the work you’re doing here.”

Of the immigration welcome centers focused on the long-term needs of immigrants, like the one with Catholic Charities in Austin, Elder Villareal said, “We envision taking this blueprint or this pattern and expanding.” He also noted they are hoping to open centers in San Antonio soon, where the Church also has a strong relationship with the Catholic Charities offices and have already been working to respond to immigrant needs. Long-term service centers have also been established in Utah, Arizona and Georgia.

“We provide self-reliance services because that is what this is all about is helping people become self-reliant,” Elder Villareal said of the centers, which provide English education classes, legal advisories, medical guidance and cultural adjustment courses, among other things.

Of the Church’s partnership with Catholic Charities, Elder Soares said, “We have something in common—we love God and we love people. So that’s what drives us on these initiatives and these efforts.”

An important part of collaborating with other faith-based organizations is ensuring that services and resources are not being duplicated, explained Father Misko.

“If we work together, then we’re able to combine services, combine our strength and it makes it just that much easier for us to do the work of God,” he said. That’s the power of partnership and a common goal.

Elder Ochoa added that when it comes to responding to people who are suffering, there is no political agenda for the Church.

“We, in a Christlike manner, try to identify them and we try to relate to their suffering and we try to make it a little bit better, at least, for them,” he said. “And it’s about humanity, it’s about the children of God and how can we help them in the most basic needs they have when they come and they have nothing.”

When it comes to helping God’s children, Elder Soares concluded, there are no geographic barriers.

Elder Richard Nichols and Sister Sally Nichols are the Church service missionaries who have been called as immigrant welcome center program directors in the Austin area. They have worked over the past few months to establish the two current centers located at Catholic Charities and at the University of Texas at Austin, and they are working to open a third later this month which will be housed at the Mexican consulate in Austin.

“We have the organization contacts now,” Sister Nichols said of the networking they have done over the past few months, “so now we are working to focus more on finding more people who need these services.”

They hope the number of immigrants attending classes and using the services of the centers will increase over the coming months, Sister Nichols said. It’s just a matter of spreading awareness now to those in need of the services.

Following the visit with Father Misko, Elders Soares, Ochoa and Villareal made a visit to the Central Texas Food Bank which serves 21 counties in the central Texas area and which, last year, provided more than 45 million meals to people in need.

Their new facility—established in June this year—is a 135,000-square-foot facility in which food is stored, packed and shipped to more than 600 meal and food programs throughout Central Texas.

Elder Soares’ visit coincided with a donation from the Church’s own food programs of 41,000 pounds of dry food goods valued at $66,000. Elder Soares was able to watch as some of the donation, which arrived on a Deseret Industries truck during their tour of the facility, was unloaded into the food bank.

A Deseret Industries truck arrives as the Central Texas Food Bank on October 18, 2019, with a donation of 41,000 pounds of dry food products.

“We want to join in every good cause,” Elder Soares told the food bank’s chief operating officer, Denise Blok, who provided the Church leaders with a tour of the facility.

Elder Soares expressed great excitement for the work being done by the food bank and joked that even he could benefit from the culinary training center provided at the food bank.

The food bank partners with more than 260 organizations throughout Central Texas, Blok noted and of those providing volunteers to work at the food bank, the Church is among the highest contributors.

While touring the facility, Elder Soares, along with Elder Ochoa and Elder Villareal, took a few moments to greet some missionaries who were volunteering at the food bank and thanked them for their work. 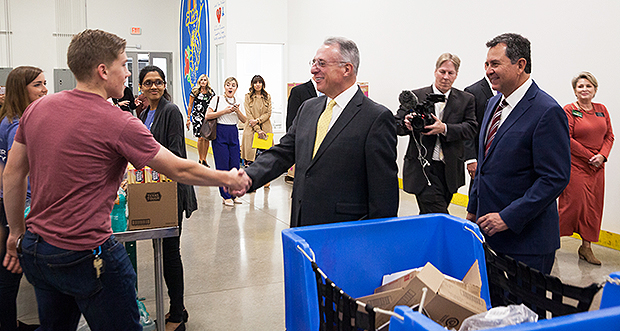 Missionaries volunteering at the Central Texas Food Bank are excited by a surprise visit and greeting from Elder Ulisses Soares on October 18, 2019.

After touring the food bank, Elder Soares reflected on the day and noted the commonalities between the two organizations he visited, Catholic Charities and the Central Texas Food Bank. Both organizations are interested in helping people in need but also in helping them to become more self-reliant, Elder Soares commented.

People who have been the recipients of such services and blessings are often able to contribute similar blessings to others once they themselves are self reliant, Elder Soares said. At the food bank, Elder Soares met briefly with a worker who shared a bit of his own background.

“He knows what it is to be hungry,” Elder Soares said of the worker. “So that is why he is working with this organization. So is that not beautiful that you receive the blessing and then you bless the others? That’s the gospel of Jesus Christ, that is what we preach.”

Elder Soares’s visit to the Austin area also included an early morning devotional with missionaries and a surprise lunchtime visit and devotional with students at the Institute near the University of Texas at Austin. In both instances, Elder Soares spoke to the young adults and described his love for them and the important role they play in the gathering of Israel which, as he noted, is another form of service—bringing the gospel to the children of God. 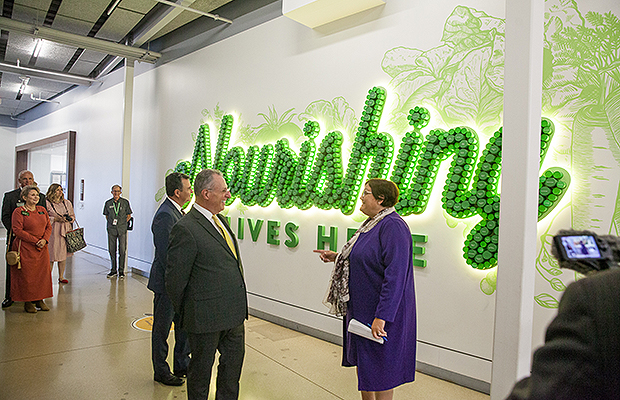 Elder Ulisses Soares speaks with Denise Blok, chief operating officer of the Central Texas Food Bank during a visit to their facilities on October 18, 2019. 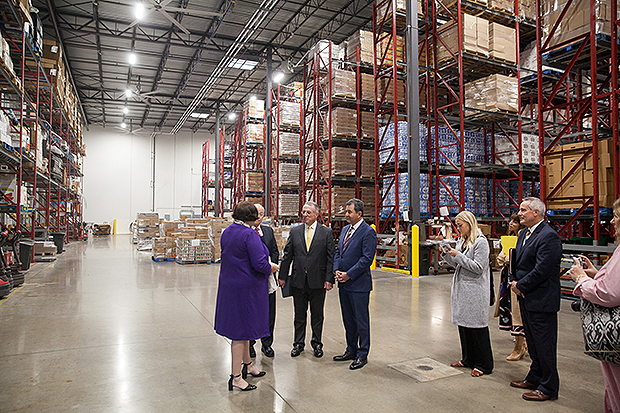 Elder Ulisses Soares and Elder Adrian Ochoa tour the Central Texas Food Bank during a visit to its facilities on October 18, 2019.

Missionaries volunteering at the Central Texas Food Bank are excited by a surprise visit from Elder Ulisses Soares on October 18, 2019. 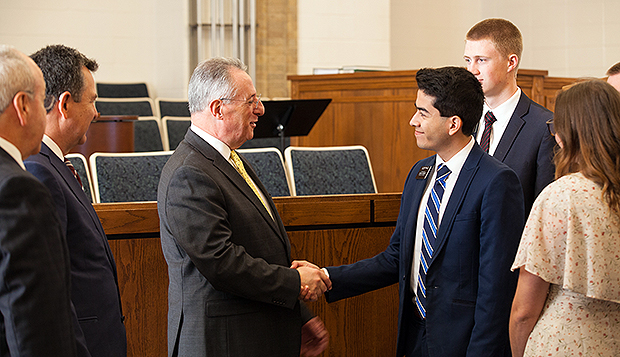 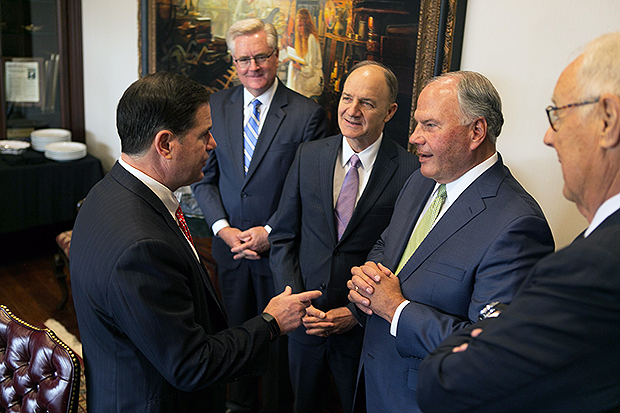 Elder Ronald A. Rasband of the Quorum of the Twelve Apostles meets with Arizona Governor Doug Ducey on Friday, October 18, 2019. 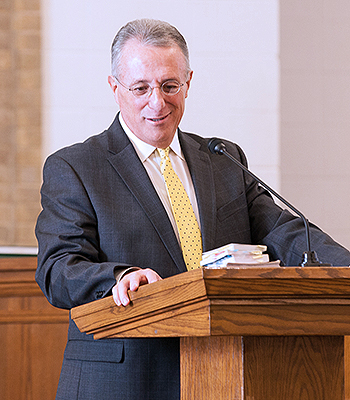