Elder Mwanken Memorialized for His Gospel Devotion and Fun-loving Nature 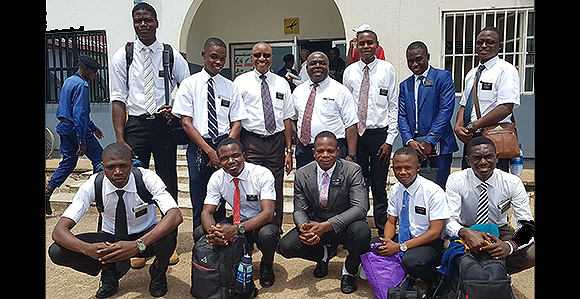 Elder Hermann Mwanken (bottom row, far right) departs for one of his first areas of labor in 2017 shortly after his arrival at the Democratic Republic of the Congo Mbuji-Mayi Mission. Elder Mwanken died October 21, 2019, following a brief illness. Photo courtesy of Elder Alfred Kyungu.

Elder Hermann Keredjim Mwanken, who died earlier this week in the Democratic Republic of the Congo, is being remembered as an “amiable missionary”  known as the “anti-stress” elder because he made all around him happy.

“(Elder Mwanken) was devoted to the work to which he was called—and he gave his best to magnify his calling as a missionary,” said Elder Alfred Kyungu, an Area Seventy and Elder Mwanken’s former mission president.

“He followed the mission rules, the mission president’s instructions, and the principles of the gospel. He sought unity from everyone and did his best to maintain good relations with his colleagues, the members, and his investigators.”

“We pray that (Elder Mwanken’s) family and loved ones will feel comforted and supported at this difficult time,” said Church spokesman Daniel Woodruff.

Elder Kyungu and his wife, Sister Lucie Kyungu, welcomed Elder Mwanken to the Mbuji-Mayi Mission in 2017. The Kyungus quickly came to love the young man who was renowned throughout the mission for his mischievous sense of humor and fondness for music.

“And (Elder Mwanken) loved to play soccer on preparation day,” wrote Elder Kyungu in an email. “He was a good soccer player and his companions used to call him ‘the great scorer.’”

Elder Kyungu also remembers watching Elder Mwanken’s gospel testimony grow over the course of his mission. He humbly accepted guidance from his leaders, allowing him to grow and improve.

Elder Mwanken’s passing is being mourned by Latter-day Saints worldwide. Members in his homeland have been especially affected, said Chris Miasnik, who recently completed a mission at the recently-dedicated Kinshasa Democratic Republic of the Congo Temple.

“This might be the first time for many that they have had to experience a missionary’s death in the field. It is also a time where they will have a chance to strengthen their testimonies about Heavenly Father’s plan for happiness.”