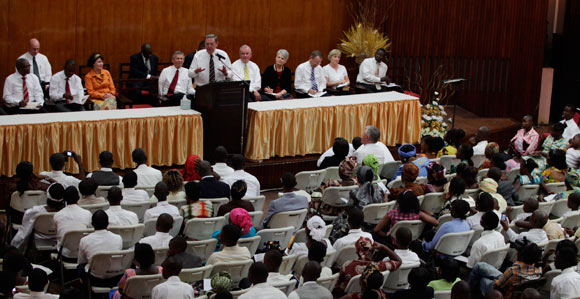 Speaking of the gospel, Elder Holland told members in Sierra Leone, “We have a reason to be the happiest people on the face of this planet.”

“We … come to strengthen and be with and enjoy the companionship of our members in Sierra Leone.” —Elder Jeffrey R. Holland of the Quorum of the Twelve Apostles

Wrapping up his travels through West Africa, Elder Jeffrey R. Holland of the Quorum of the Twelve Apostles met with missionaries, members, government officials, and representatives of the press during a three-day stay in Sierra Leone.

After arriving in Freetown on Friday, February 17, 2012, Elder Holland and Elder Steven E. Snow of the Presidency of the Seventy—accompanied by their wives, Patricia and Phyllis, respectively—met with missionaries. Elder and Sister Snow lived in Africa for about five years.

He emphasized the need for the missionaries, as representatives of the Church, to be disciples. “A disciple is one who has disciplined his life in conformity with the gospel,” he said.

He encouraged missionaries to teach lessons in such a way that both they and their investigators could have a spiritual experience.

Later that same day, Elder Holland and Elder Snow, along with local Church leaders, met with His Excellency, the vice president of Sierra Leone, Samuel Sam-Sumana.

Much of their conversation centered on disaster relief. In a later meeting with members of the local press, Elder Holland said, “I suspect The Church of Jesus Christ of Latter-day Saints may be [as] recognized as any in the world for its immediate response to disaster.”

He clarified that aid is open to all, regardless of religion, race, or economic standing. “We are committed in those circumstances to relieving suffering, and we do everything we can, and we do it as quickly as we can,” he said.

Mr. Sam-Sumana expressed a great desire to get more young people into an employable occupation. Elder Holland assured him that the Church would like to help by supplying students with financial support through the use of grants, loans, scholarships, and other means.

Speaking with members of the local press, Elder Holland explained the Church’s purpose in Sierra Leone—where almost 10,000 Church members live—and throughout the world.

“We’re anxious for you to know that everything we’re doing … is to strengthen people in the countries where they live,” he said. “We … come to strengthen and be with and enjoy the companionship of our members in Sierra Leone.”

Elder Holland summarized the history of the Church for press members and then reviewed Church initiatives on health, clean water, and education. He also explained tithing, missionary work, and the service that members render in their wards and branches.

On Sunday, February 19, Elder Holland presided over a district conference with members in Freetown before leaving Africa.

“We have a reason to be the happiest people on the face of this planet,” he told members.

Comparing today to the account of Christ’s visit to the Americas found in Third Nephi in the Book of Mormon, Elder Holland said, “However great that day was, if we can understand it, our day is greater. Christ has returned. … That is the declaration of the gospel of Jesus Christ in the latter day, the last and greatest of all dispensations. It is that the Father and the Son appeared to a 14-year-old boy.”

Elder Holland concluded by saying that although the world has troubles, the gospel brings happiness and hope and eternity. He reminded members that individuals are responsible to be faithful and to keep covenants. He left the Saints in Sierra Leone with an apostolic blessing.