Elder Holland Tells Ghanaian Saints to Be Their Best 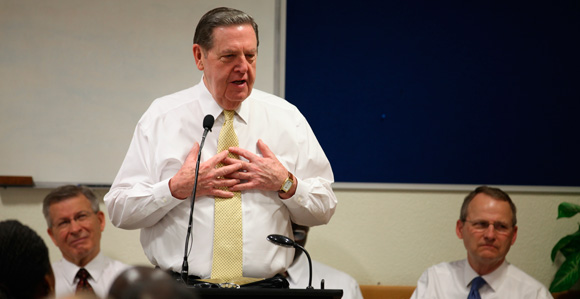 “Wherever you work in this great, grand organization, I want you to believe in our spiritual significance, your spiritual service.” —Elder Jeffrey R. Holland, Quorum of the Twelve Apostles

While completing an area review in Accra, Ghana, Elder Jeffrey R. Holland of the Quorum of the Twelve Apostles met with area office employees, missionaries, and members, and encouraged them to reach their potential in their different capacities.

Shortly after traveling from nearby Liberia, Elder Holland met with missionaries in the Accra Ghana MTC on Monday, February 13, 2012.

Following messages from Elder Steven E. Snow of the Presidency of the Seventy and his wife, Phyllis, as well as Patricia Holland, Elder Holland spoke to both young and senior missionaries.

“If we had a universal symbol of the Church, I daresay it would be two missionaries,” he said. However, he continued, that compliment is also their burden.

“My challenge to you and my very direct language to you is, you are not free to compromise that tradition. … So, be your best,” he said.

He emphasized that missionary work is not a temporary calling. “I want you to work to the 11th hour, but when you go home, you go home and represent the greatness of this gospel [forever],” he said.

Elder Holland expressed his love for Africa, remembering when President Gordon B. Hinckley (1910–2008) announced the building of the Accra Ghana Temple.

“Little by little, we’re going to see this continent covered by temples,” he predicted.

He impressed upon the missionaries the privilege it is to be missionaries. “Know that the work of salvation has never been easy. It’s hard because salvation is hard,” he said.

“You’re not going to do what [Christ] did … but you’re going to do a little. You have to take a few steps that He took. You have to shed a couple of the tears that He shed. You’ve got to feel a little of the pain He felt or else what is a disciple of Christ?“

The following day, February 14, Elder Holland held a devotional with area office employees. He stressed that “all things unto [the Lord] are spiritual” (D&C 29:34; see also verse 35).

“Wherever you work in this great, grand organization, I want you to believe in our spiritual significance, your spiritual service,” he said.

This year Church leaders will create the 3,000th stake in the Church and Africa will see seven or eight new missions, Elder Holland said. But there will still be only 3 members of the First Presidency and 12 Apostles.

He explained that area reviews allow Church leaders to communicate with local leaders and stay informed of members throughout the world.

Elder Holland reported on the prophets and apostles and on Sister Frances Monson. “She’s given her whole life to this Church,” he said, reviewing President Thomas S. Monson’s 49 years as a General Authority. “I suppose that if there is a modern contemporary heroine in the Church, it’s Frances Monson.”

Elder Holland thanked and praised the leaders of the Africa West Area and encouraged them to lead by example.

On Wednesday, February 15, members packed a local stake center to hear Elder Holland speak during a fireside, prior to his departing for Sierra Leone.

Elder Holland based his remarks on Acts 3, wherein Peter and John heal a man lame since birth on the steps of the temple.

He testified of the miracle of God’s love and the power of the priesthood.

“In this Church, you get a lot more than you bargain for,” he said. “That man on the steps of the temple that day had no higher hope than that he would get a [coin]. … What he got were straightened legs and the chance to walk and leap and sing and praise God and go into the temple.”

He concluded, “I testify that I count myself one among you, like the lame man on the steps of the temple, who never dreamed what lay in store.”

Elder Holland emphasized that nothing will stop the spread of the gospel throughout the world.

He left members with an apostolic blessing, and he encouraged the men of the Church to be better at home.

For a report on Elder Holland in Sierra Leone, check Church News and Events later this week.