Elder Jeffrey R. Holland converses with Baroness Emma Nicholson, who invited him to participate in a conference at Windsor Castle on religious persecution.

“Unless matters change, the refugees will be left to their own devices just as the Mormon migrants were.” —Elder Jeffrey R. Holland of the Quorum of the Twelve

In recalling the persecutions and forced migration of Latter-day Saints in 19th-century America, Elder Jeffrey R. Holland noted that their anguish was lessened by the compassion of others. “We will never forget the precious opportunities, blessings, and miracles given to us during that time from God and from kind, caring people.”

Elder Holland, a member of the Quorum of the Twelve Apostles, shared the religious refugee story of the Church during a gathering of civic, philanthropic, and religious leaders from around the world as part of a conference held at historic Windsor Castle in the United Kingdom.

The address was one of two offered by Elder Holland—one on September 11 and the other on September 12—during a five-day conference titled “Religious Persecution: The Driver of Forced Migration” (see related story).

Elder Holland spoke at the invitation of Baroness Emma Nicholson, a member of the United Kingdom House of Lords and the chair and founder of the international relief organization the AMAR Foundation, which sponsored the conference.

In sharing the experience of Mormon pioneers as refugees during his address on Septemer 12, Elder Holland told the gathered leaders, “I do not pretend my people’s experiences are the same as we see happening today. However, all refugees share some common denominators of grief and suffering, so perhaps there is some insight for our conference participants hidden in the persecution of my ancestors nearly two centuries ago.”

Elder Holland explained that in the early decades of the 1800s, members of The Church of Jesus Christ of Latter-day Saints, also known as Mormons, found themselves misunderstood and, for a variety of reasons, violently persecuted and displaced.

Persecutions escalated, culminating in the 1838 “Extermination Order” of Missouri Governor Lilburn W. Boggs, who declared that Mormons must be exterminated or driven from the state. The Saints fled from Missouri to Illinois, where the Prophet Joseph Smith was martyred at age 38. They forged on to the West, where they found refuge in the Great Basin desert.

The “ragged corpus” of Saints in the 19th century is strikingly different than the picture of Latter-day Saints today, Elder Holland said. “But this transition did not happen serendipitously. A number of factors helped Latter-day Saints navigate their refugee experience.”

Despite the conflict they faced, their shared faith “created a strong sense of community among the Latter-day Saints, and they supported each other during their trials,” Elder Holland said.

They shared housing, food, and resources because of their collective belief in God and in the restored gospel. “My people’s identity and faith carried them through decades of crisis,” Elder Holland said.

Similarly, modern-day migrants “should be allowed to hold to their unique cultural traditions that will help them navigate the uncertain waters they currently traverse. These traditions will not only help them in the present but will anchor the future to the past.”

Organizational participation was also an important factor the Latter-day Saints relied on to navigate their experience, Elder Holland continued.

“The centralized nature of the Church’s administrative structure allowed members to remain informed, united, and engaged in the problems they faced, a fact that is still true today,” Elder Holland said.

Brigham Young, Joseph Smith’s prophetic successor, formed a committee called the Committee of Removal, “which solicited donations for the poor, loaded passengers and belongings in wagons, sent men ahead to survey and locate possible settlement sites, and directed appeals for help to state and city agencies” and was critical to keeping the Saints united in migration.

“We need to help today’s refugees regain a sense of fulfillment by allowing them to participate in the resolution of their own circumstances as much as possible,” Elder Holland said, adding that it is not always possible.

“No one is suggesting that less assistance be given to refugees; we need more help,” he said. However, refugees need to be given greater organizational participation in shaping their own post-dislocation destiny when and where possible. 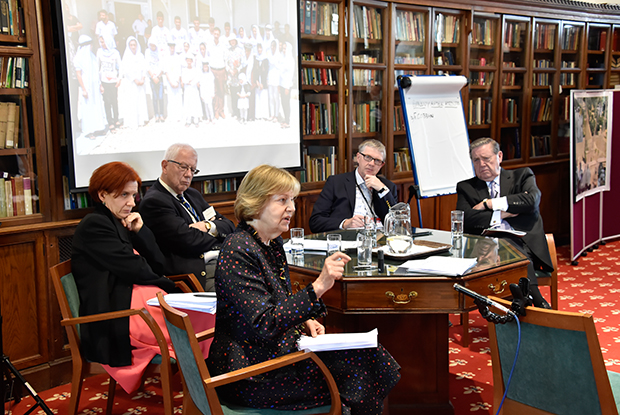 Elder Jeffrey R. Holland and civic, philanthropic, and religious leaders from around the world participate in a conference sponsored by the AMAR Foundation at Windsor Castle. Photo by Simon D. Jones.

“Without the generous aid of those not of their faith, members of the LDS Church would have found themselves in much more difficult circumstances,” he said.

Similarly, “in the communities where displaced people live, we need to encourage local citizens to welcome them into their everyday lives,” Elder Holland said.

To this day the Church recognizes the heroic contributions of the people of Quincy, Illinois. “They did not do so under compulsion or because of affiliation with an aid organization. They were everyday people, living everyday lives, who came to the rescue. Without this critical community link, refugees will persist in isolation and in a state of dependence longer than is healthy.” 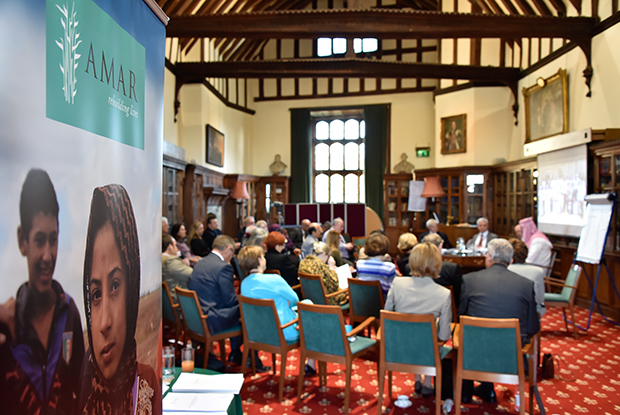 In a similar way, governments today are not responding to the refugee problem urgently enough, nor on a large enough scale. “Unless matters change, the refugees will be left to their own devices just as the Mormon migrants were. Right now there are simply not enough safe places—not enough Quincys, if you will—for the large amount of refugees around the world,” Elder Holland said.

Elder Holland invoked the words of the prophet Isaiah, who said of the Messiah, “Surely he hath borne our griefs, and carried our sorrows. … He was wounded for our transgressions, … bruised for our iniquities: … and with his stripes we are healed” (Isaiah 53:4–5).

“This is the greatest of all examples of shared grief, compassionate intervention, and the extended hand of redemption by another,” Elder Holland said. “May we follow that lead by bearing the burden of our displaced brother and sister.” 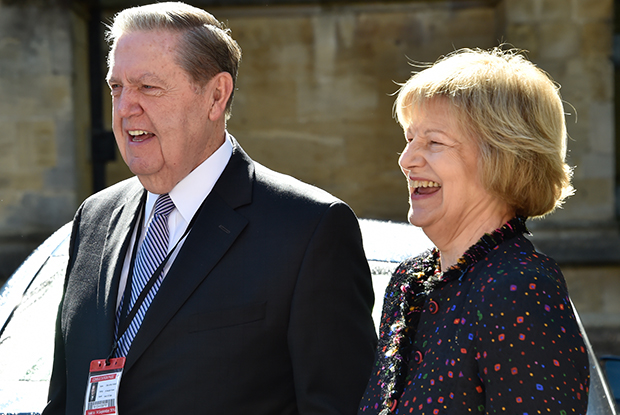 Elder Jeffrey R. Holland and Baroness Emma Nicholson, who invited him to participate in a conference on religious persecution, stand outside Windsor Castle. Photo by Simon D. Jones. 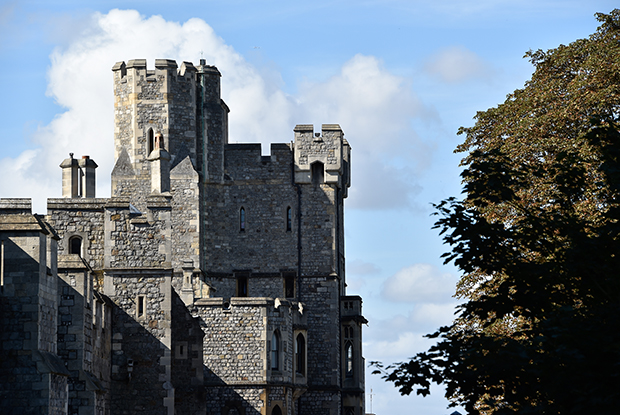 A conference at Windsor Castle, sponsored by the AMAR Foundation, addressed the topic “Religious Persecution: The Driver for Forced Migration.” Photo by Simon D. Jones. 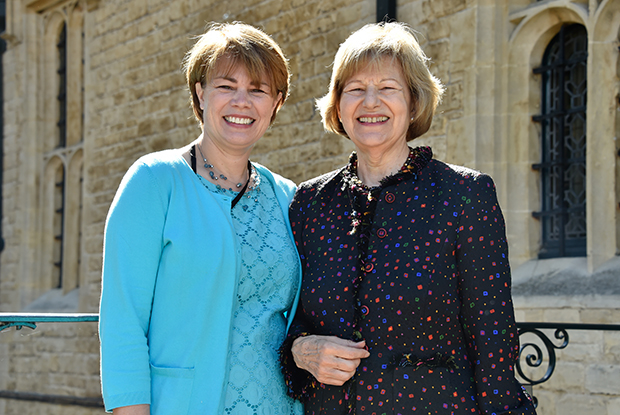 Sharon Eubank, director of LDS Charities, poses for a photo with Baroness Emma Nicholson, founder and chair of the AMAR Foundation, during a conference on religious persecution at Windsor Castle. Photo by Simon D. Jones.