Baroness Emma Nicholson, Dr. Alastair Redfern Lord Bishop of Derby, and Elder Jeffrey R. Holland and his wife, Patricia T. Holland, pause for a photo at a conference at Windsor Castle sponsored by the AMAR Foundation on September 12, 2016.

About 23 miles from London, Windsor Castle sprawls across a green English hilltop. For centuries, the castle has been the official residence of the English monarchy and is the longest continually inhabited castle in the world.

On September 10–14, the historic castle welcomed a different set of international leaders as representatives from religious, academic, government, and humanitarian organizations gathered for a conference addressing religious persecution and its role in forced migration.

Elder Jeffrey R. Holland of the Quorum of the Twelve Apostles attended and spoke at the conference at the invitation of Baroness Emma Nicholson, chair and founder of the AMAR Foundation, an international relief organization that sponsored the five-day conference.

“We are trying to invoke political and moral influence in the world,” Elder Holland said of the conference, “and that’s what kingdoms and castles have represented over the years. It’s wonderful to be here.”

Baroness Nicholson noted that the gathering of international representatives in “this wonderful, peaceful castle” is far removed from the lives endured by millions across the Middle East.

“In these next few days together it is imperative that we investigate the root causes of centuries-old hostilities,” she said. “Why has religious persecution become the main driver for forced migration, and how do we stop these atrocities from happening in the future?”

On September 11, in his first of two speeches at the conference, Elder Holland addressed “a tragic problem that has for a very long time been a largely invisible part of war and conflict”—sexual violence against women.

Elder Holland cited data documenting the estimated incidents of war-related violence against internally displaced women. “Statistics like these give only numbers and cannot tell of the shattered lives, broken health, and fractured families of the individuals affected,” Elder Holland said. “Surely God knows of their suffering and weeps with them.” 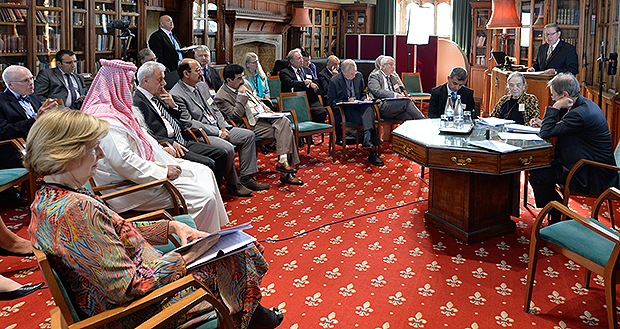 He then quoted the words of Isaiah, who wrote, “Therefore said I, Look away from me; I will weep bitterly, labour not to comfort me, because of the spoiling of the daughter of my people” (Isaiah 22:4).

Elder Holland bore his witness of “God’s love for those who suffer some of the worst that this world has to offer.”

Elder Holland explained that religious freedom can play an important role in preventing conflict and violence, especially to women. Religious belief answers the basic questions of the human experience—“Who am I? Why am I here? Where am I going?”—questions that come from the soul’s desire to understand the purpose of life.

“That is why a religious right is a human right,” he said. “A human being must be permitted to find meaning in their life and for their life. For the vast majority of individuals on the planet that involves searching out, investigating, adopting, and, when necessary, adapting religious beliefs.”

The freedom to search for meaning in life is “one of the most important freedoms a woman can have in any society where cultural traditions might seek to impose upon her a lesser conception of her own value. Religious freedom is the very foundation of anything that could be called empowerment,” Elder Holland declared. 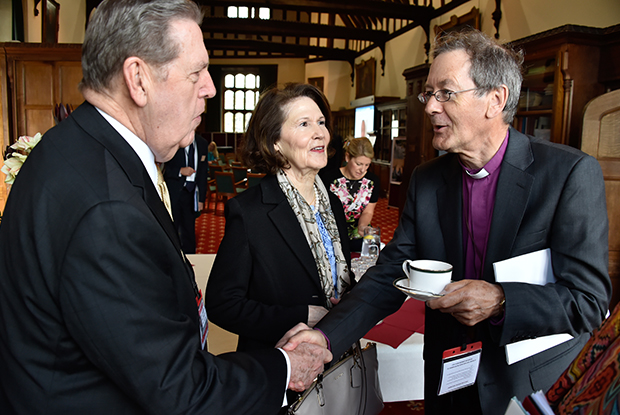 “We need to realize that reducing restrictions on religion, particularly when these restrictions are targeted against minorities, is one additional component in the solution to forced migrations.”

There is still much to be done to reduce conflict and eradicate the sexual violence that accompanies it, Elder Holland said. “This is a work that will require our best efforts, our most thoughtful and coordinated responses, our most compassionate and open hearts.” Such efforts are strengthened, he added, by determined women.

Elder Holland commended Baroness Nicholson and her “herculean work” in advancing the cause. “Emma Nicholson is a magnificent example of the very empowerment of which we speak.” 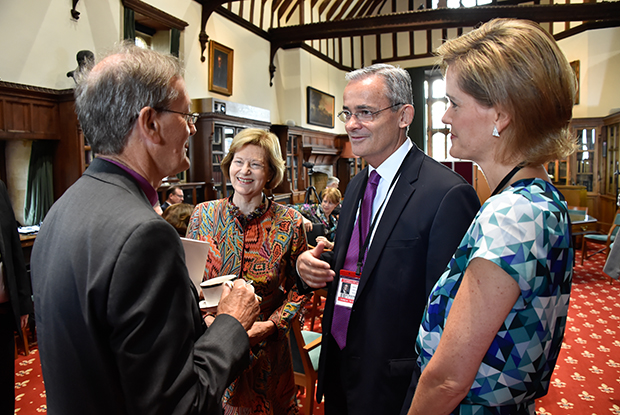 In addition to his address on September 11, Elder Holland also shared insights on September 12 on the Mormon refugee experience. (See related story.) LDS Charities has partnered with the AMAR Foundation on several humanitarian projects. In 2015, Elder Holland discussed humanitarian aid and the role of religion in resolving conflict at the All-Party Parliamentary Group on Foreign Affairs at the United Kingdom Parliament at the invitation of Baroness Nicholson. 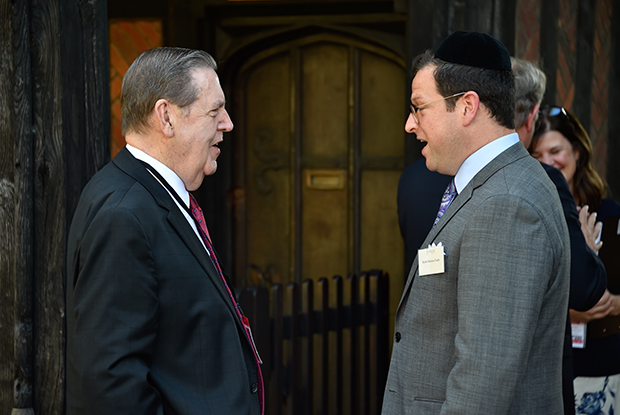 Elder Jeffrey R. Holland with Rabbi Shlomo Farhi on September 13, 2016, at Windsor Castle during a conference sponsored by the AMAR Foundation called “Religious Persecution: The Driver for Forced Migration.” 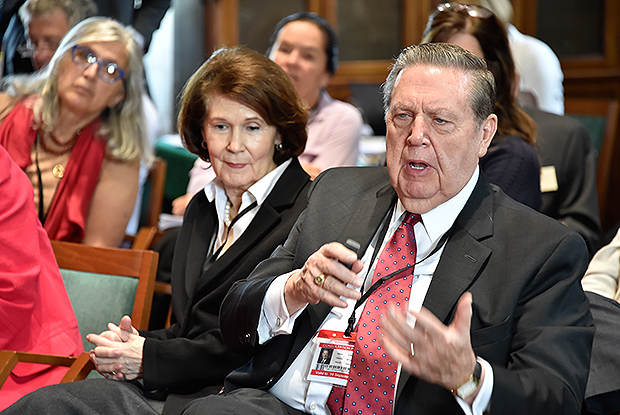 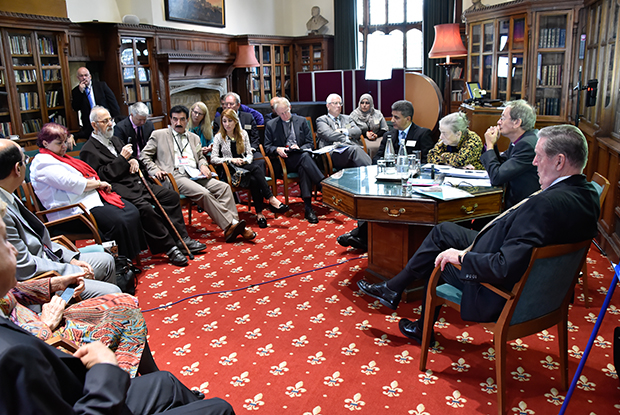 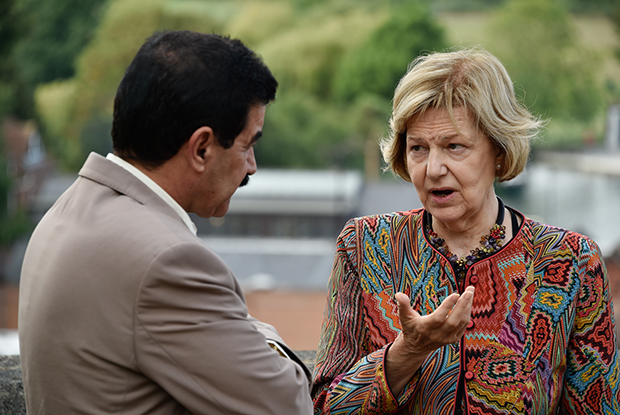 The AMAR Foundation, founded and chaired by Baroness Emma Nicholson (right) sponsored a conference at Windsor Castle titled “Religious Persecution: The Driver for Forced Migration” in September of 2016. 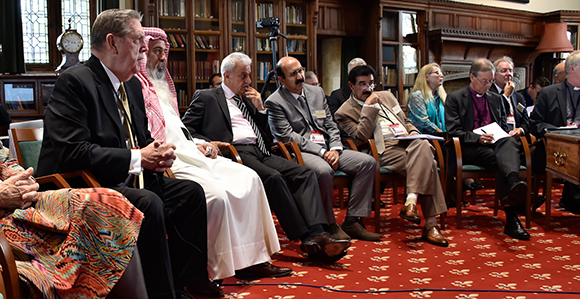 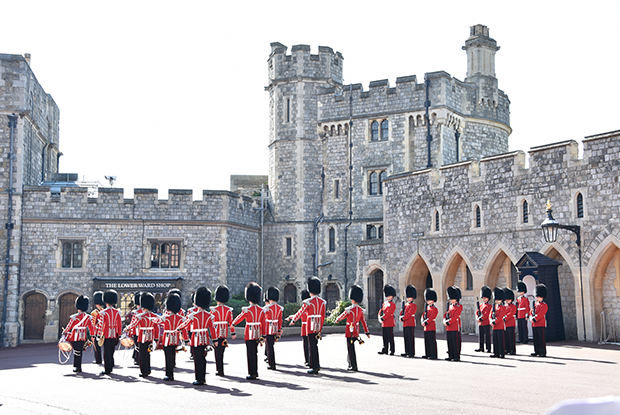 On September 9–14, 2016, a conference at Windsor Castle sponsored by the AMAR Foundation addressed “Religious Persecution: The Driver for Forced Migration.”