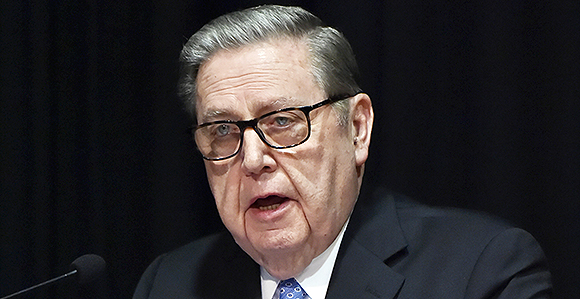 Elder Jeffrey R. Holland speaks as part of a distinguished panel of religious leaders discussing “Inspiring Service” in Pembroke College’s Pichette Hall at the University of Oxford on Friday, November 23, 2018. He also spoke at the college’s chapel to several scores of Latter-day Saint young married couples, answering their questions about their challenges and about the gospel.

With notable openness, Elder Jeffrey R. Holland shared struggles from his own life with young married British members of the Church who gathered in a 300-year-old chapel this week as the member of the Quorum of the Twelve Apostles continued his weeklong trip to England.

In an intimate setting in the Oxford’s Pembroke College Chapel, he spoke frankly about pain from his own life about some who opposed his mission, a depressing moment as a young father worried about finances, a relative who is unable to conceive, and the tears he has shed over seemingly unanswered prayers.

Leaning on a slim lectern in front of the stone marble altar in the dimly lit chapel, Elder Holland also expressed joy about recent changes in the Church and joked about the Quorum of the Twelve’s coping strategy for keeping up with President Russell M. Nelson.

He moved the lectern aside and sat in a chair to listen to and answer deeply personal questions from women and men in their 20s and early 30s that drew him to relate relevant personal experiences. One woman said the Church has been the source of her greatest joy but that some policies and past history have been the source of pain and confusion for her and for family and friends who have left.

Elder Holland welcomed the question, leaning forward in his chair to listen and respond. He said he had many answers but not all and spoke of the pain and deaths experienced by Peter and Paul, whose statues flanked a painting of Christ in a red robe on the wall above and behind him. He said the impact the gospel has made on his life, after growing up without its consistent presence in his childhood home, has marked him forever, as has the gospel influence of his wife, Sister Patricia Holland.

He urged the members, some of whom had taken a half-day or day’s worth of vacation to travel through a gray, cold afternoon to attend the meeting, to keep walking when their personal journeys grow most difficult, “and I know you’ll get to the meadowlands again.”

To some who expressed concern that they felt less of the Spirit than they did while as missionaries or at other times in their lives, he said that he too had shed tears like theirs when his prayers have gone unanswered, but said he had learned that God needs His children to stretch themselves, that he has learned God will eventually answer all their prayers, and that he has seen in hindsight the growth that he has found when God took a step or two back to allow him to learn and gain his own experience.

“When you feel blocked or limited, maybe it is stretching,” he said, adding, “I have shed tears over prayers I did not think were getting very far, but with greater hindsight I could see that was a lesson in maturity and growth.”

The 40 couples from the Reading, Staines, and Watford stakes sat in the chapel’s wooden benches that run lengthwise down the chapel and face each other across the room in the collegiate style of a monastic church. They are designed for recitation of Psalms, with one side saying the odd-numbered verses while the other responds with the even verses.

A sampling of the heartfelt questions and answers include:

Question: “We just had our first son three months ago, and that changed our world for us. Can you teach me, what does it mean for a husband to preside in the family?”

Elder Holland: “When the Savior washed the feet of the Twelve, He was teaching that great lesson of stewardship and leadership and love. … If you could attain that spirit, I would never, ever worry about you being a husband and a father, if you were that devoted to your wife and that devoted to your children that they meant everything that they could and should mean to you, and in that deferential way you would wash their feet and change the baby’s diapers and take time with your wife to listen to Beethoven together.”

Question: “I struggle with mental health, and at times I feel blocked in the Spirit. I know you talked about that. How does one overcome mental health issues blocking the Spirit?”

Elder Holland: “My case was very limited—an incident in a moment over a problem. That isn’t what a lot of people experience, which is more clinical issues that are more permanent. I cannot begin to say I know what that is like. … I had a spirit of depression. The very fact that we talked about it from the pulpit—that it is not an indictment, it is not a failure, it is not a weakness—I think a lot of good was done then by just talking about it, by being open about it so we can talk about what we can do. It is true that there are very real experiences, very real phenomena that do cause that blocking. All I know how to do is to get all the professional help you can and continue to pray and trust and to keep as reasonable and rational about the blessings of the gospel and trust in the future.”

Question: “What advice do you have about spouses and children?”

Elder Holland: “Of all the things in the world that are worth your whole soul and devotion, it should be your spouse and your children. Short of being in the very presence of God, literally, you will never be more proximate to divinity than you are in the presence of your spouse and children. They deserve godly loyalty. They deserve divine attention. Husbands, when your wife asks you to do better, she’s not talking about perfection. She’s not criticizing you. She’s saying, ‘I need you. I need you to be here. I need you to listen. I need you to be nearby.’ Wives, when your husbands are troubled or worried, and they will be because they would like to be perfect too, what they need you to say is, ‘You are OK now. You are all right now. We will work on perfection later. I love you like crazy right now, just the way you are.’”

The chapel setting they were in added to the experience, the members said.

“It was really lovely that it was so personal and the setting was so intimate,” said Kimberly Jest, 32, of Reading, who cried through much of the event.

“I was feeling the pain in the room from the people who were hurting,” she said, “and I was feeling overwhelmed by the gratitude of having such a personal experience with an Apostle because of his calling and the mantle he holds.”

Her husband, Harry, age 32, took a half-day off work to attend. He said he felt the strong impression that Elder Holland was representing Jesus Christ, but the couple felt like they were having a conversation with him as a friend.

“And that’s what Jesus Christ would do if He were here,” Harry Jest said. “I really liked how he said the closest we’ll get to divinity is the role we’ll play as spouses and parents,” he said.

The Jests said it was deeply meaningful to meet as a peer group. Many couples went out together after the meeting.

One young father asked Elder Holland what questions he and other Apostles ask as they seek revelation.

Elder Holland said he asks about things he does not know and about what the long-term policies of the Church should be.

He told a young woman concerned by her parents’ hostility to her conversion to the Church that she is the first sermon to them.

“They won’t show up for church soon,” he said. “The best you can do is be the best Latter-day Saint you can be, and you don’t condemn them or treat them the way they treat you. My dad was quite opposed to me going on a mission. I know what it is like to walk that path and not get angry. I used to get angry. I wanted to know why he needed to be that way. Why did he need to take it out on me and provide that kind of opposition? I lived to repent of that. I understand him a lot more than I did then.

“While you bide time, you be the best you can be, and that will be an undeniable witness to them,” he told the woman. “No parent can deny the sweet experience in the life of their child.”

Elder Holland asked them to be fair with God and promise Him they would count their blessings too, any time they begin to count their problems.

“The conviction I felt from him,” Kimberly Jest said, “was that we could trust God as much as the pioneers, who trusted Him so much that they were willing to bury their children and go through what they went through. There was a conviction that there is meaning in that suffering, that it’s not arbitrary or from a malicious God. There’s divinity in that suffering.”

The group also laughed together as Elder Holland talked about the administration of President Nelson.

“We travel with him by relay,” he said of the Twelve, and he laughed along with the members. “We pass the baton to the next one to keep up with him.”

Elder Holland expressed a wish that members could be with him in the weekly temple meetings of the Council of the First Presidency and Quorum of the Twelve Apostles. He noted that not all revelation in those meetings is shareable, but he promised that, after a year in which the Church has announced multiple major initiatives, more are to come.

“The windows of revelation seem free and open and abundant,” he said. “Since the moment he became President of the Church, Russell Nelson has been particularly open, particularly receptive, and particularly entitled to revelation that is more public, is more sharable.”