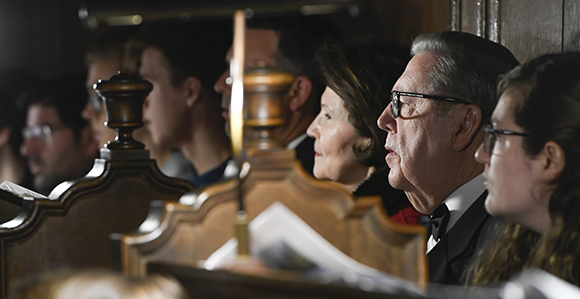 Elder Jeffrey R. Holland of the Quorum of the Twelve Apostles and his wife, Sister Patricia Holland, listen during the traditional Church of England “Nine Lessons and Carols” service in the Pembroke College Chapel in Oxford, England, on Sunday, November 25, 2018.

“The unique, joyous meaning of the birth of this baby was not confined to those first hours in Bethlehem but would be realized in the life He would lead and in His death, in His triumphant atoning sacrifice.” —Elder Jeffrey R. Holland of the Quorum of the Twelve Apostles

Standing in the midst of the benches of an intricately decorated 1700s Anglican chapel on Sunday during the Church of England’s signature Christmas service, Elder Jeffrey R. Holland delivered a message about the comfort he felt at his father’s death because of Christ’s birth.

“To be true to the complete experience we must on occasion speak of Christmases—and other days in our individual and collective lives—that for whatever reason may not be as joyful or do not seem to be ‘the season to be jolly,’” Elder Holland of the Quorum of the Twelve Apostles said.

The best-attended event of the year at the Pembroke College Chapel, “Nine Lessons and Carols” intersperses carols and hymns with Bible verses about “the tale of the living purpose of God,” said the chapel’s chaplain, the Reverend Andrew Teal, who invited Elder Holland to speak and conducted the meeting.

In a white robe trimmed with blue and wearing a gold stole, Reverend Teal delivered a bidding prayer at the beginning of the service after rising from his seat in the dimly but artfully lit chapel. He was positioned at a small lectern built into the collegiate-style benches along one wall of the chapel in the midst of the congregation.

Elder Holland sat at the opposing small lectern on the facing benches in a black bow tie and tuxedo. He was the lone speaker. He followed 10 hymns and carols that alternated with nine readings from Genesis, Isaiah, Matthew, Luke, and John about the Fall, prophecies about Christ, and the story of His birth.

Elder Holland spoke from Luke 2 about Simeon, saying there is a profound Christmas message in the sign “this dear old man” gave Mary when he held a weeks-old Christ child in his arms at the temple. Simeon rejoiced at the fulfillment of a promise that he would see the Messiah, but he also issued a dire “warning that this child’s life—or more specifically His death—would be like a sword piercing through His beloved mother’s soul.”

“We might well ask,” Elder Holland said, “Was such an ominous warning, such a fateful prophecy, appropriate in this season of joy? Surely such was untimely, maybe even unseemly, at that moment—that moment when the Son of God was so young and tender and safe, and His mother so thrilled with His birth and his beauty?”

Elder Holland recalled his father’s two heart attacks during and after back surgery on December 23, 1976.

“By the time we finally got to see him, wired and tubed and gray and unconscious, it was mid-afternoon on December 24, Christmas Eve. ‘Magnificent timing,’ I muttered to no one in particular.”

He said he paced and prayed alone in an unfamiliar hospital as Christmas Eve turned into Christmas, feeling sorry for himself and muttering questions about why he had to lose his dad at Christmas.

Then he received what he termed a “theological wake-up call.”

“At 3 a.m. late early morning in a very quiet hospital, immersed as I was in some sorrow and self-pity, heaven sent me a small, personal, prepackaged revelation, a tiny Christmas declaration. In the midst of my mumbling about the very poor calendaring in all of this, I heard the clear, unbroken cry of a baby.”

He said the calendaring and divine grace of the timing of that birth changed his outlook. He recognized the joy that child must be in its parents’ lives. He remembered that his mother always reminded him of the joy he brought her as a Christmas baby himself.

“With new eyes then, that morning, I went back to look at my dad, the great gift-giver who was starting to make his way out of the world on Christmas Day. He was doing so on the wings of the greatest gift ever given—the Atonement and Resurrection of the Lord Jesus Christ. I thought of another Father who gave that gift.”

Standing under an ornate ceiling that bore Latin phrases like “Redemptor Omnibus”—Redeemer of all—Elder Holland said Simeon’s prophecy to Mary was appropriate and important. He said all should see the meaning of Christmas the way Simeon saw it and told Joseph and Mary as they stood in the temple where they offered a sacrifice, a pair of turtledoves.

“The true meaning,” Elder Holland said, “the unique, joyous meaning of the birth of this baby was not confined to those first hours in Bethlehem but would be realized in the life He would lead and in His death, in His triumphant atoning sacrifice—remember why Joseph and Mary were in the temple—and in His prison-bursting Resurrection. These are the realities that make Christmas joyful.”

He said Simeon would sing with the choir and congregation in the chapel Sunday night “not in the absence of hard days and long years and swords that pierce our hearts, but because of them.”

The Pembroke College Chapel Choir, about 30 strong, sang five pieces, including Mendelssohn’s “There Shall a Star.” The choir and congregation joined in the other six carols and hymns, singing “Oh, Come, All Ye Faithful” after Elder Holland’s talk.

Vickey Petchey of London and a member of the Staines Stake said the service was especially moving because she converted to the Church from the Church of England, where she had been an altar girl involved in services like Sunday night’s. Her conversion created some tension with her Anglican bishop, so she was buoyed to see Elder Holland and Reverend Teal hug after Reverend Teal ended the service with a blessing.

“It was lovely to see their embrace,” she said.

An Oxford resident in the choir said she likes the cultural unity Christmas provides and that she felt Sunday night.

“I don’t think I’d ever heard anyone with the LDS speak at length,” said Emma Sadler, a post-doctoral bacteriologist. “I enjoyed it. He seems like a very good man, wise and noble. I’m not a believer, but I can appreciate a lot of what he said.”

“Nine Lessons and Carols” was first created and performed in 1880 by a future Archbishop of Canterbury. It was made famous 100 years ago when it was performed on Christmas Eve 1918 to celebrate the end of World War I a month earlier. Today, a version of the service is broadcast around the world by the BBC live from King’s College in Cambridge every Christmas Eve at 7 a.m. mountain standard time. 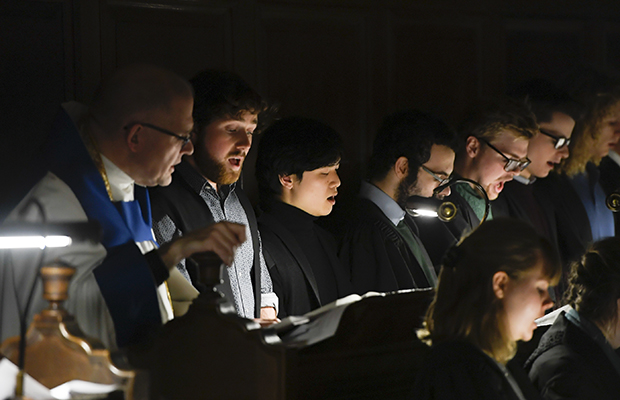 The Pembroke College Chapel Choir and the chapel’s chaplain, the Reverend Andrew Teal, left, sing during the traditional Church of England “Nine Lessons and Carols” on Sunday, November 25, 2018. 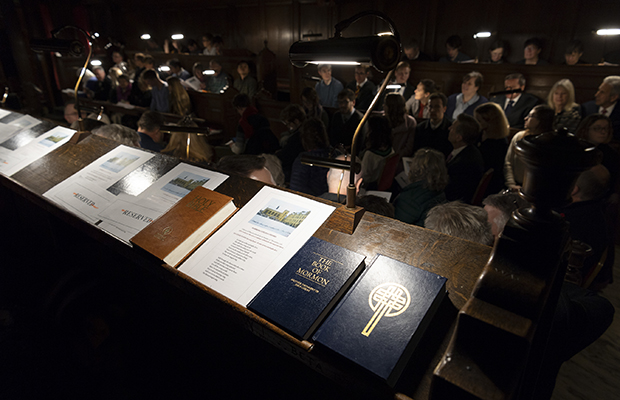 A Bible, a Book of Mormon, and a Church of England lectionary of worship texts rest on a lectern on the top row of benches before the start of the traditional Church of England “Nine Lessons and Carols” service at the Pembroke College Chapel in Oxford, England, on Sunday, November 25, 2018. 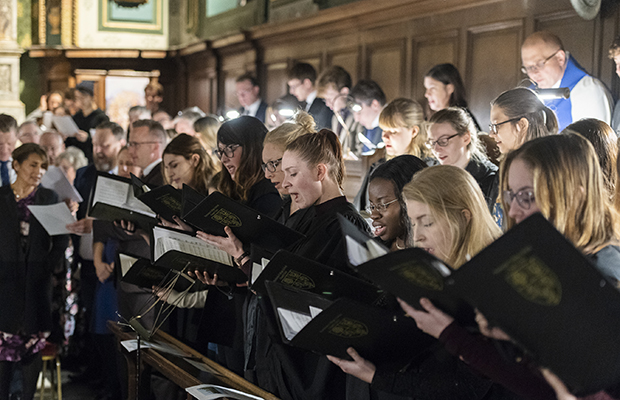 The Pembroke College Chapel Choir and congregation sing a Christmas hymn during the traditional Church of England “Nine Lessons and Carols” service on Sunday, November 25, 2018. 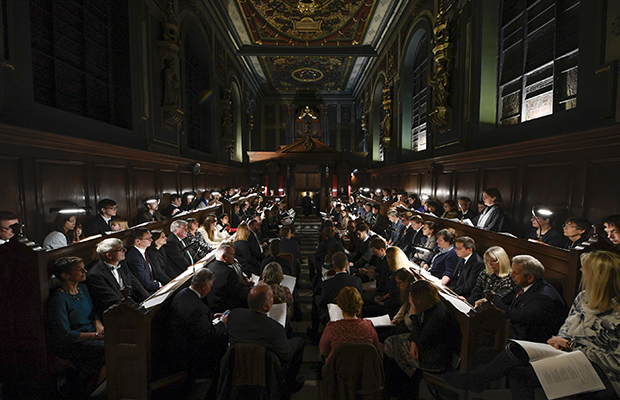 The congregation listens to a biblical selection about Jesus Christ during the traditional Church of England “Nine Lessons and Carols” service at the Pembroke College Chapel in Oxford, England, on Sunday, November 25, 2018. 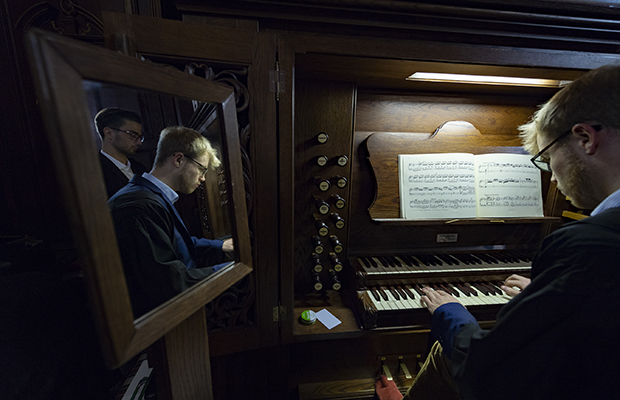 An organist plays during the “Nine Lessons and Carols” service on Sunday, November 25, 2018.