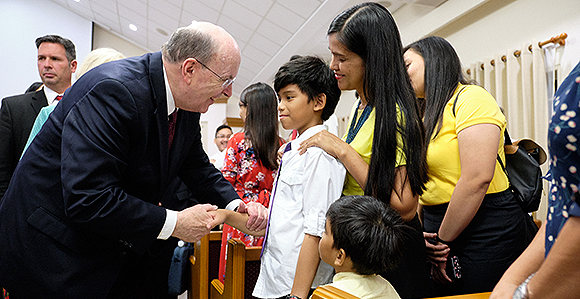 Elder Quentin L. Cook of the Quorum of the Twelve Apostles visits with Latter-day Saints at the Mandaluyong Philippines Stake Center in Manila, Sunday, January 12, 2020.

In a Philippines community blanketed by the white ash of the Taal Volcano, Elder Quentin L. Cook of the Quorum of the Twelve Apostles comforted local members of The Church of Jesus Christ of Latter-day Saints who had fled the disaster.

Each returned the outreach from Elder Cook with characteristic resilience. “Even with severe devastation, they watch out for one another,” said Elder Cook of the Filipino members. “They have a spiritual sense that things are going to be all right.”

Elder Cook and his wife, Sister Mary G. Cook, moved to the Philippines in 1996 after he was called as a General Authority. During the next two years, they “came to just love the Filipino people,” said Sister Cook.

“They are all such spiritual people,” added Elder Cook. “They love the Savior.”

The Apostle’s trip to the Philippines was scheduled months before the volcano erupted on January 12, sending a large plume of ash, steam, and rocks miles into the air.

During his trip in the second week of January, Elder and Sister Cook met with members, government officials, religious leaders, and local media representatives. Accompanied by the Philippines Area presidency—Elder Evan A. Schmutz and his counselors, Elder Taniela B. Wakolo, and Elder Steven R. Bangerter—Elder Cook also ministered to disaster victim.

Elder Cook acknowledged the work of the area presidency and their wives—Sister Cindy Schmutz, Sister Anita Wakolo, and Sister Susann Bangerter—for the good they do in the country, including their response to the most recent disaster.

Immediately following the eruption, The Church of Jesus Christ of Latter-day Saints opened meetinghouses in the disaster zone and provided temporary shelter, food, and other necessities for victims. Local Latter-day Saint congregations donated clothing, prepared meals, and rented buses to help with the ongoing rescue efforts for people who were forced to leave the endangered areas.

“We feel just an enormous appreciation for the Filipino people,” said Elder Cook. The Cooks’ assignment to the Philippines took place as the Catholic Church in the country celebrated the 500th anniversary of Christianity in the Philippines. 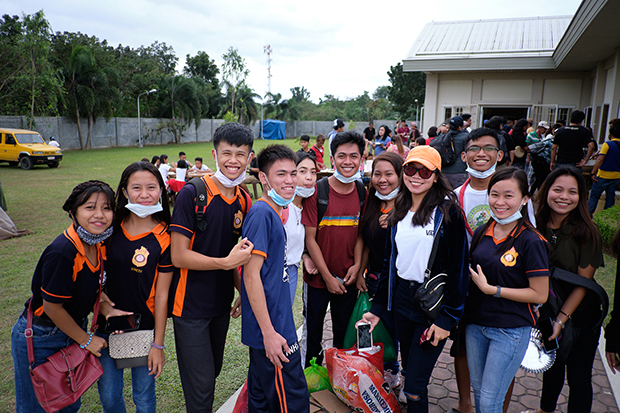 Latter-day Saints gather at a local meetinghouse as the Taal Volcano continues to spew ash south of Manila, Philippines.

During a meeting on January 13 with prominent religious leaders in Manila, Elder Cook discussed the importance of religion to democracy and expressed concern for volcano victims. The Church has “deep and strong relationships” with the interfaith community in the Philippines, he said.

There are almost 800,000 members of the Church in the Philippines—almost 5 percent of the Church’s worldwide population.

Elder Cook said he does not know of another country where the Church, which began missionary efforts in the Philippines in 1961, has grown so fast in such a short period of time.

He met with missionaries at the Manila Missionary Training Center and missionaries from two of the 23 missions in the Philippines.

During the trip, he also met with Domini Torrevillas of The Philippine Star to discuss the foundational principles of faith, family and religious freedom. Torrevillas is a columnist with the Star, which has a combined circulation reaching more than one million daily readers.

Elder Cook also met with Philippines President Rodrigo Roa Duterte and other government officials. He presented a $20,000 donation on behalf of the Church and announced a humanitarian project fund of $100,000. The funds will provide food, hygiene, and sleeping kits as well as face masks for people impacted by the Taal Volcano. 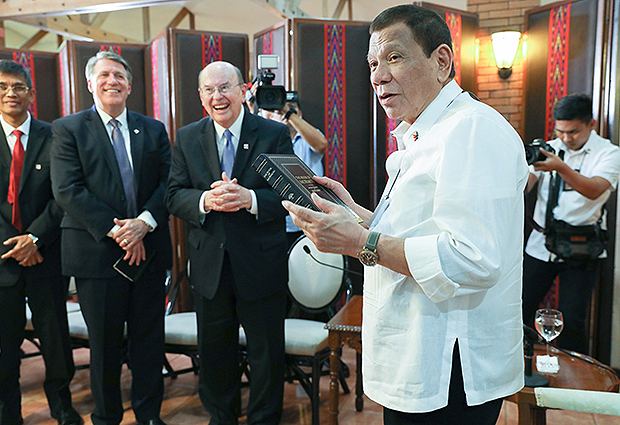 “The visit was exceptional. He was warm and gracious,” said Elder Cook, who was joined in the presidential meeting at the Malago Clubhouse at Malacañan Palace by Elder Schmutz; Elder Aretemio C. Maligon, an Area Seventy; and Edwin B. Bellen, deputy secretary for legislation of the Senate of the Philippines and a member of the Church.

They spoke of the Taal Volcano, located about 35 miles south of the capital city, and the Church’s efforts to provide evacuation centers in Church meetinghouses for Latter-day Saints and community members.

“There is a history here of floods, typhoons, volcanoes, and they are resilient,” said Sister Cook.

“This is not the first time, and it won’t be the last time that you’ll see people caring for one another,” explained Elder Schmutz. “You’ll see uplifted hearts, and they know that they’ll return and resume their lives.”

Elder Cook said that in the Philippines, people don’t dwell on their challenges or problems. “They do smile. They are genuinely warm and gracious, and they are so grateful for things in life. They really are a very unique people. It is a privilege to be with the Filipino members of the Church.” 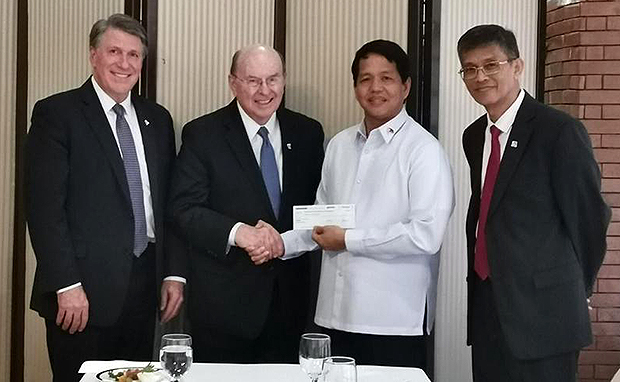 Days after the eruption of the Taal Volcano, Elder Quentin L. Cook presents a donation on behalf of the Church to Rolando Bautista, Department of Social Welfare and Development secretary. 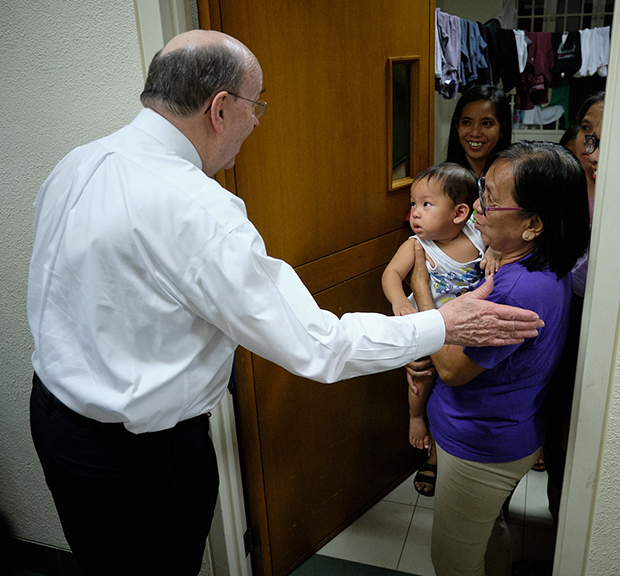 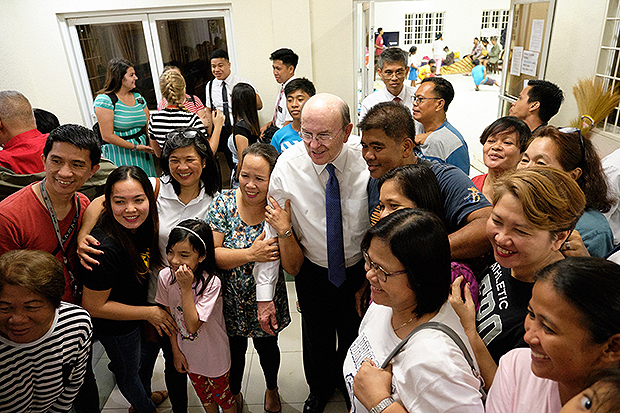 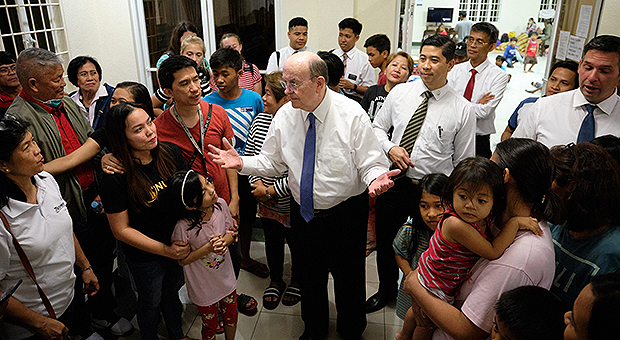 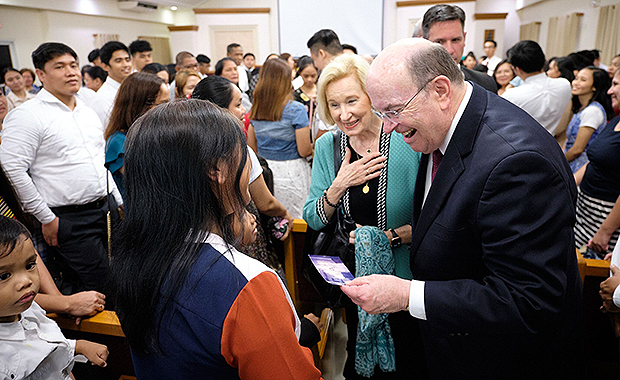 Elder Quentin L. Cook and his wife, Sister Mary Cook, are surprised to see a photograph taken of them in the 1990s when Elder Cook was serving in the Philippines Area presidency. Alyssa, the woman who brought the image, was serving as a sister missionary when the picture was taken.