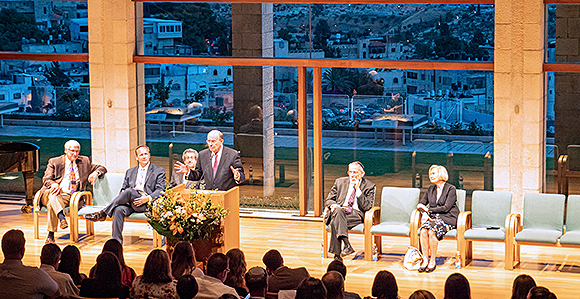 Elder Quentin L. Cook speaks to a group of Latter-day Saint and Jewish scholars about the importance of interfaith dialogue to build understanding and respect. The meeting was held at the BYU Jerusalem Center on June 5.

With the historic and iconic backdrop of the Old City slowly darkening under the setting sun behind him, Elder Quentin L. Cook of the Quorum of the Twelve Apostles said his mind focused on the people, the land, and the shared history of all those who honor Jerusalem as the Holy City.

“It is a sacred place,” he said, “honored by three great monotheistic religions—Judaism, Christianity, and Islam.”

Speaking to an audience of students, faculty, staff, and friends at the Brigham Young University Jerusalem Center for Near East Studies in Israel on June 5, Elder Cook was joined by Rabbi Michael Melchior—a Jewish leader, Orthodox rabbi, and chief rabbi for Norway—for the semiannual Jewish-Latter-day Saint Dialogue.

The gathering—an event now in its third year—centered on the importance of religious freedoms, open interfaith dialogues between the two religious faiths, and the commonalities of interests between Latter-day Saints and Jews.

“It is important for us to gather, talk, share, and discuss matters of the heart and mind,” Elder Cook said, noting that both Jews and Christians continue in modern times to apply the ancient and timeless principles and teachings of the Hebrew Bible to live better and more fulfilling lives.

“Think for a moment of the two great commandments,” Elder Cook said. “‘Love the Lord’ and ‘love your neighbor.’ These profound teachings represent the highest ideals and make the world a much better place.”

Such teachings, recorded in the Bible several millennia ago, have played a crucial role in shaping and influencing the teachings of historical leaders, both religious and secular, he noted.

Citing examples, where the teachings of the Bible have crossed into influencing the secular rule of law, such as the prophet Nathan challenging King David, and English barons challenging King John, resulting in the Magna Carta, Elder Cook said, “I see a direct line from the Hebrew Bible through English law to democratic societies today.”

The influence for good that the teachings of the Bible have had throughout history are undeniable, he explained. Protections for religious freedoms are a crucial part of continuing that good.

“Each has a fundamental focus on family; each places a very high value on education; each has a strong commitment to charitable giving; ... each has a history of disproportionate success due to ability, hard work, and determination; and each has been subjected to fierce persecution and prejudice.”

Elder Cook said he told Abrams that “although Latter-day Saints had suffered persecution and prejudice, there is no analogue, in all of history, to the Shoah or Holocaust, and there is no comparability to it.”

Of Abrams’ list, Elder Cook addressed the first of the commonalities before adding one of his own to the list.

The first commonality, the fundamental focus on families, stems from the Bible and the doctrine of the first commandment given to Adam and Eve to multiply and replenish the earth, Elder Cook said.

Quoting from the Church’s “The Family: A Proclamation to the World,” Elder Cook explained that Latter-day Saints believe “parents have a sacred duty to rear their children in love and righteousness, to provide for their physical and spiritual needs, to teach them to love and serve one another, to observe the commandments of God, and to be law-abiding citizens wherever they live.”

The second commonality, the high value placed on education, is something that Latter-day Saints believe deserves their best efforts, he said. As such, the Church puts significant resources and energy into making high-quality education accessible and affordable.

He also noted Latter-day Saints have long admired the Jewish community’s commitment to education. “In every sphere of learning, the Jewish people have not only excelled but also have helped expand the boundaries of knowledge that have blessed the world.”

The third commonality noted is the strong commitment to charitable giving. Such interests, carried out through international humanitarian efforts, serve to make the world a better place for all, not just those of faith.

Adding his own fourth commonality between the faiths, Elder Cook shared data from a study done by the Gallup organization some years ago ranking Latter-day Saints and Jews at the top of what they labeled as the “Well-Being Index Composite Score.”

It is interesting that the Jews and Latter-day Saints have “the highest sense of well-being in the United States,” he said. 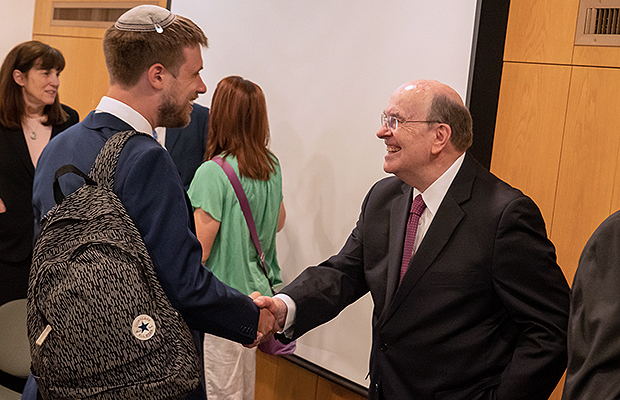 Elder Quentin L. Cook of the Quorum of the Twelve Apostles shakes hands with Jewish students on the evening of his June 5 address at the BYU Jerusalem Center.

Noting the reasons listed for why Latter-day Saints were ranked at the top of the list, Elder Cook said researchers cited the following: a pro-social orientation, a focus on family, a sense of purpose and meaning in life, an understanding of autonomy and agency, and general physical health.

Elder Cook expressed his gratitude for the two communities’ willingness to seek understanding and build respect for one another. “It is a time to listen to one another and learn from one another,” he said of the event.

Before concluding, he shared one doctrinal understanding which he said “provides Latter-day Saints with a distinctive view of God.”

He explained that revelation given to Joseph Smith—found in the Pearl of Great Price—indicates God is empathetic and His children’s misery and suffering may cause Him to weep.

“To me, this scripture provides a window into God’s heart, mind and soul,” he said of words found in Moses 7. “[God] is our living, loving Heavenly Father, and we are His children … . He weeps with us as we suffer and rejoices as we do what is right in His sight.”

He added: “In my mind, I can imagine the tears shed as a result of the Shoah or Holocaust. He is a God of empathy who does not have a hand in what causes the suffering. He is the Great Consoler.” 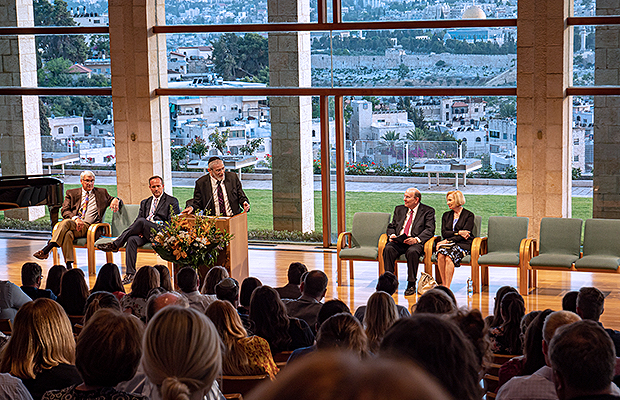 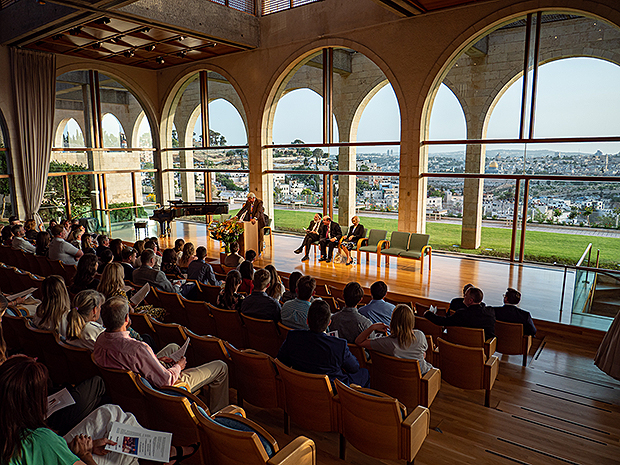 With the panoramic view of the Old City visible through the background windows, the semiannual Jewish-Latter-day Saint Dialogue is held June 5 at the BYU Jerusalem Center.