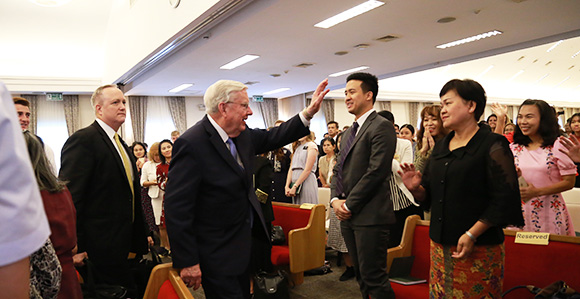 President M. Russell Ballard, Acting President of the Quorum of the Twelve Apostles of The Church of Jesus Christ of Latter-day Saints, waves to members after speaking at a stake conference in the Thailand Bangkok North Stake in May 2019.

“The members of the Church in Asia hunger and thirst for the guidance and instruction of their leaders. Wherever we went, congregations exceeded expectations.” —Elder David F. Evans, General Authority Seventy

With aromas of fruit and spices following visitors throughout the streets of Hyderabad, India, the air is humid and hazy, and the nearly 110-degree temperatures make it uncomfortable to move about the city, with its bustling population and traffic. But for President M. Russell Ballard, Acting President of the Quorum of the Twelve Apostles, who recently visited India for the first time, “in a way it felt like home.”

“The members we met with are wonderful Latter-day Saints,” President Ballard told the Church News after returning to Salt Lake City. “It doesn’t matter where we find them, whether they’re in India, South America, or Africa. Once the gospel penetrates their hearts and minds, you feel like you are home.”

With more than 1.3 billion people in the country, the 13,000 or so members of The Church of Jesus Christ of Latter-day Saints represent only a fraction of the population. And although the Church has maintained a small presence in the country for more than 100 years, its real growth has been in the last 25 years or so, after the first mission was established in Bangalore in the 1990s.

“There has been a lot of talk about how the Church is growing in India, and I wanted to get acquainted with the culture there,” President Ballard said of his visit.

“His desire to come and learn so that he and others can provide more informed counsel and direction has been very important,” Elder Evans said. “He came to India especially to learn. He felt a need to personally see what others had talked about, so he went about meeting the people, interacting with leaders, and seeking inspiration from the Lord.”

Watching President Ballard highlighted for Elder Evans the importance of India’s role in the Church’s continued global growth and influence. And in his four days there, both the country and the people left an impression on President Ballard.

“It’s going to be interesting for all of us to watch as the Lord does what He wants done in the growth of the Church there and in the other places we visited,” President Ballard said. 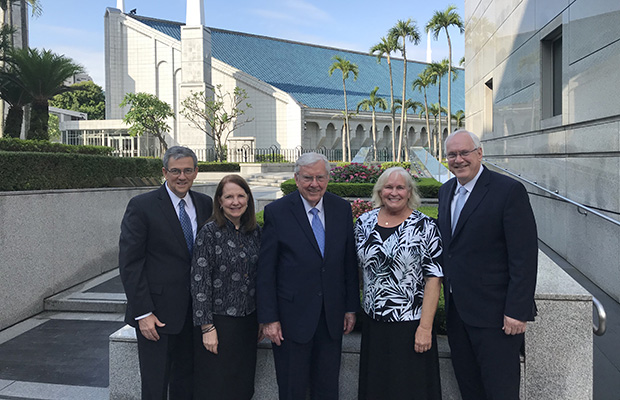 From left, Elder David F. Evans and his wife, Sister Mary Evans; President M. Russell Ballard; and Sister Lynette Gay and Elder Robert C. Gay pose outside of the temple in Taipei, Taiwan, in May 2019.

While in India, the leaders split up on Sunday, May 19, to speak at separate stake conferences in Hyderabad, New Delhi, and Bangalore. The combined attendance at the three stake conferences was over 1,800, with at least 670 members attending the conference with President Ballard in New Delhi. The meetings, some of the largest gatherings of Latter-day Saints in India, were representative of the increasing strength of the Church and a reminder to the visiting leaders of the importance of leadership.

The Asia Area of the Church holds about half of the world’s population, Bishop Davies said. “And India, if it’s not already there, is forecast to become the most populous country in the whole world. The gospel principles of family and unity ring very true to them, so how could it not have a major role going forward?”

Although Church membership in India is still small in comparison to the overall population, both the members and leaders are strong, Elder Gay explained, noting that the majority of local leaders are returned missionaries.

“Full-time and returned missionaries are truly establishing the Church in India,” he said. 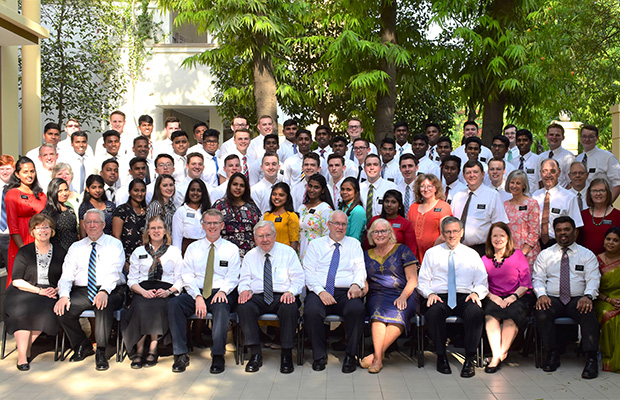 President M. Russell Ballard sits front and center for a group photo with missionaries in the India New Delhi Mission in May 2019.

Their missions have helped prepare the local leaders for their roles, Bishop Davies said, noting the number of missionaries serving from India is increasing both in and out of India. Yet more are still needed, he added.

“More of the Indian youth need to prepare,” President Ballard said. “We need to teach them and prepare them so they can go forth and serve missions and serve in their own home country and help build the Church there.”

Meeting with missionaries in each country on the tour, President Ballard also emphasized to missionaries currently serving the importance of their role in the gospel.

President Ballard’s fundamental message to missionaries at each stop of his Asia trip was to be the best teachers they can be, Elder Evans said, “because these young servants of God and their leaders have been called of God to be the Lord’s instruments in bringing the gospel to Asia.”

In Taichung, Taiwan, President Ballard invited an old friend, and one of the first Church leaders in China, to come and speak to a group of missionaries with him. Brother Chu Jen Chia, a former Area Seventy and a current patriarch in Taiwan, found the gospel many years ago while living in Toronto, Canada. It was in Canada that President Ballard first met him and set him apart as a counselor in a stake presidency. 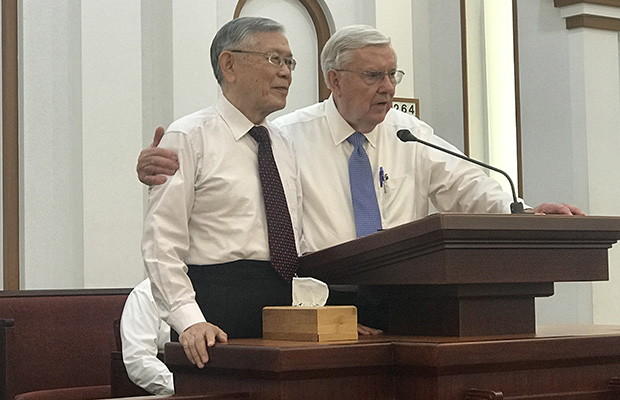 President M. Russell Ballard, right, stands at the pulpit with Brother Chu Jen Chia during a meeting with missionaries in the Taiwan Taichung Mission in May 2019.

The privilege of being with the members

Throughout his 10-day trip, President Ballard demonstrated a desire to be with and strengthen the members.

“Wherever he went, he shook hands, greeted families, and gave witness of the truthfulness of the gospel,” Elder Evans said. “He desired to counsel together with the Area Presidency and others regarding the real issues facing the Church in Asia. He didn’t just want to receive a report of our activities. Rather, he desired to learn of the issues facing the members and the Church and to actively counsel together to find solutions and a path forward.” 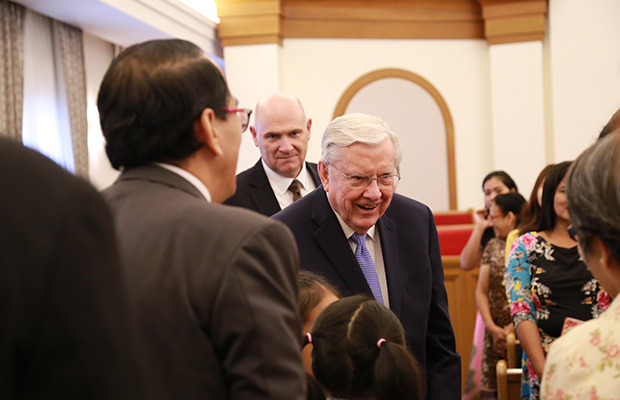 President M. Russell Ballard speaks with members at a stake conference in the Thailand Bangkok North Stake in May 2019.

In Bangkok, Thailand, when President Ballard and the other leaders realized they had a few extra unscheduled hours, they decided to make the most of the time and called an impromptu gathering for the young single adults of the area.

“With less than 24 hours notice, the chapel was full to overflowing, and many lives were touched,” Elder Evans said. “The members of the Church in Asia hunger and thirst for the guidance and instruction of their leaders. Wherever we went, congregations exceeded expectations.”

The members in Asia are faithful people who simply desire to know God’s will for them and their families, he added.

Reflecting on the trip, President Ballard said, “It is a privilege and blessing to be with the members of the Church.” 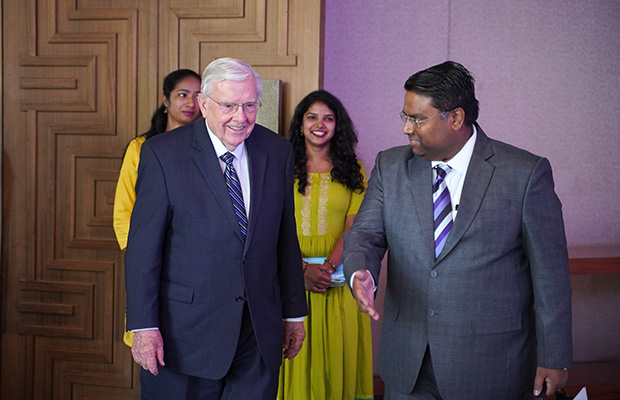 President M. Russell Ballard with Suresh K. Ramakrishna, stake president of the New Delhi India Stake, prior to a conference where he addressed nearly 700 Church members and friends at the Hyatt Regency in New Delhi, India, on May 19, 2019.

The affection that members around the world show for the General Authorities is because of their deep love for the Lord Jesus Christ, President Ballard said. “They don’t know M. Russell Ballard as an individual. But because I am an Apostle of the Lord Jesus Christ and they love Him, they have a sense of respect and appreciation. And they’re always so kind to us wherever we go. I always feel overwhelmed.”

President Ballard said he considers it a privilege to help carry the gospel to God’s children throughout the world in their various circumstances. As he does, he looks into the eyes of the people.

“I can see a child of God who is very special to Heavenly Father,” he said, “and special to the Lord Jesus Christ.” 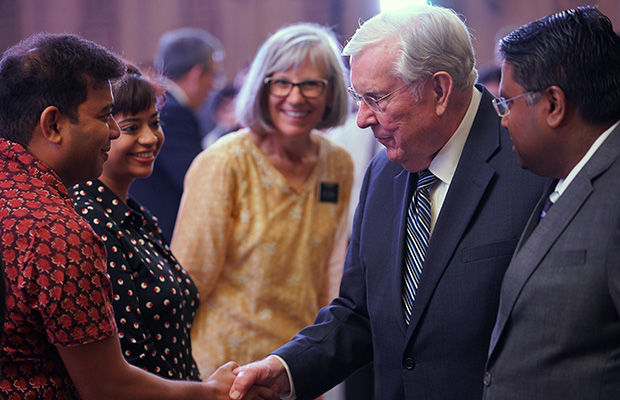 President M. Russell Ballard greets members of the New Delhi India Stake prior to a conference where he addressed nearly 700 Church members and friends at the Hyatt Regency in New Delhi, India, on May 19, 2019. 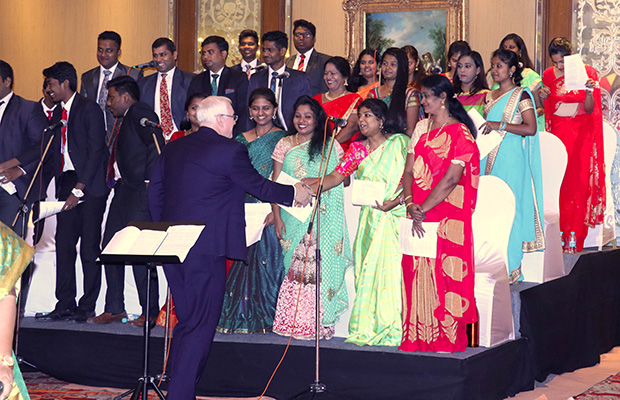 Elder Robert C. Gay shakes hands with members of the choir during a meeting with members in Hyderabad, India, in May 2019. 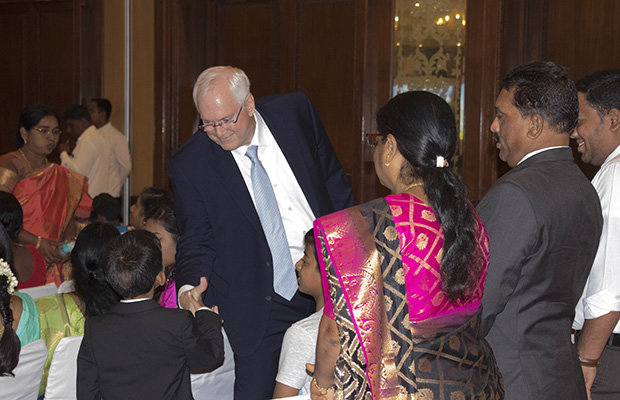 Elder Robert C. Gay of the Presidency of the Seventy greets members in Hyderabad, India, in May 2019. 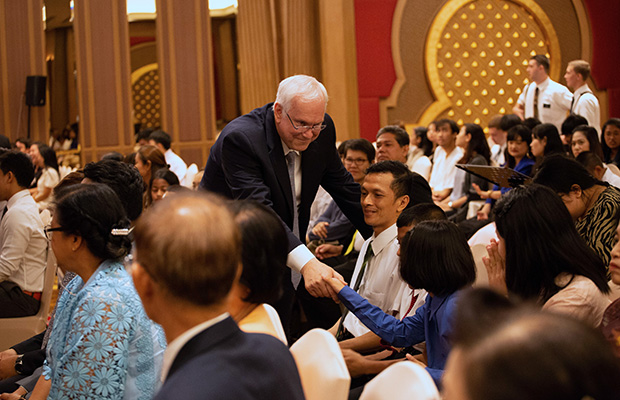 Elder Robert C. Gay shakes hands with members during a stake conference in Hyderabad, India, in May 2019. 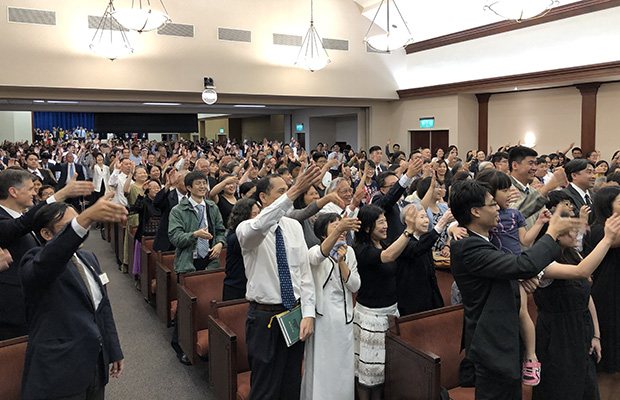 During a member devotional in Taipei, Taiwan, members hold up their hands to do an air handshake with President M. Russell Ballard, who was speaking on the stand, in May 2019. 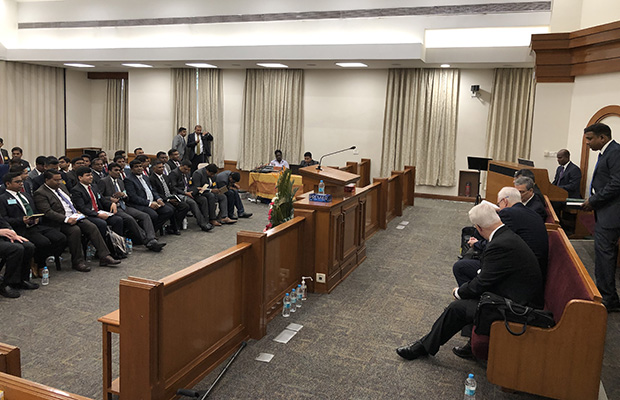 A leadership meeting in Hyderabad, India, in May 2019. 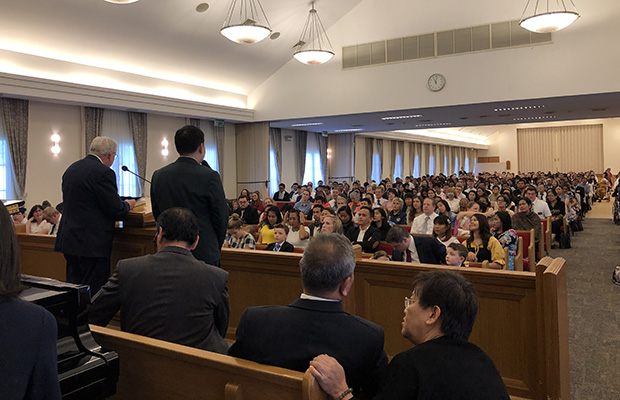 President M. Russell Ballard speaks during a stake conference in the Thailand Bangkok North Stake in May 2019.