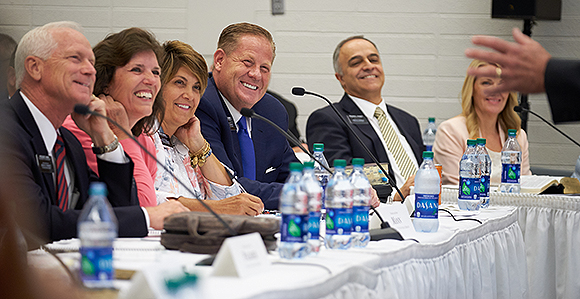 Mission presidents and their wives gather in the Provo Missionary Training Center to hear counsel and instruction from Church leaders during the 2017 Seminar for New Mission Presidents on Sunday, June 25.

New mission presidents and their wives—127 couples from 24 countries—gathered at the Provo Missionary Training Center June 24 through June 28 for the 2017 Seminar for New Mission Presidents.

The couples, who will serve in 61 different countries, received training and instruction from senior Church leaders.

Sharing the gospel and the love of the Lord is a call all Latter-day Saints receive at baptism, taught President Henry B. Eyring, First Counselor in the First Presidency.

“We are in His service, called by Him to help take His gospel and His love to Heavenly Father’s children,” said President Eyring.

President Dieter F. Uchtdorf, Second Counselor in the First Presidency, told the new mission presidents, “You will not only have a positive influence on the spreading of the word of God worldwide, but you will also impact the lives of individuals and families,” he said. “You will be remembered for years and generations to come.”

Members of the First Presidency and Quorum of the Twelve Apostles attend the 2017 Seminar for New Mission Presidents on Sunday, June 25.

Of the 127 couples entering missionary service, 82 couples came from the United States, 10 from Brazil, and four couples were called from Argentina, from Mexico, and from the Philippines. The remaining mission presidents represent 19 additional countries.

More than 50 of the new mission presidents work in business or finance, and more than 25 are Church employees; 11 work in the legal profession.

Elder Brent H. Nielson of the Seventy and Executive Director of the Missionary Department thanked the new mission presidents and their wives—who begin service July 1—for their courage to “accept a call you did not seek, to an area you did not choose, to be with people you do not know.” 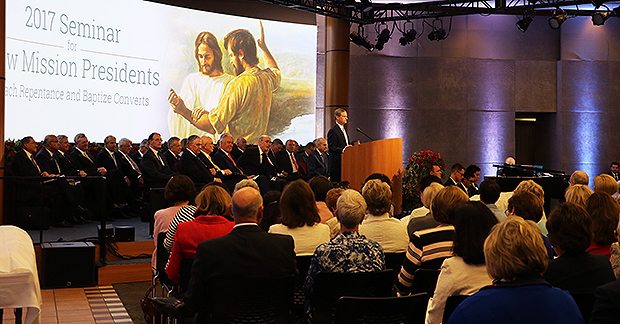 Members of the First Presidency and Quorum of the Twelve Apostles attend the 2017 Seminar for New Mission Presidents on Sunday, June 25.

Following are summaries of selected talks given during the seminar (links will be added as individual stories are published during the coming weeks):