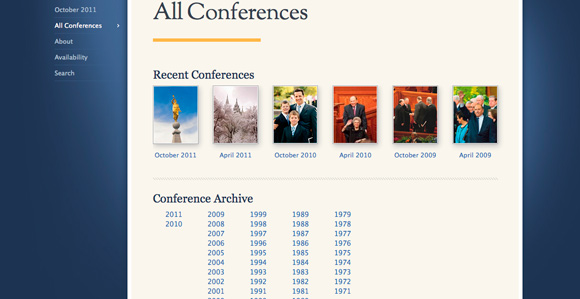 By June 2012, online archives will feature audio and video of every general conference from April 1971 to the present.

“The purpose of this initiative is to make conference messages much more accessible to members of the Church around the world.” —Elder Patrick Kearon of the Seventy

In an effort to help members better experience counsel given by beloved past and current prophets and apostles, the Church is adding audio and video to general conference archives dating back to 1971 on ChurchofJesusChrist.org.

In addition to expanding its online conference archives, the Church is also enhancing its past conference offerings in many other ways, including adding music archives and making past conference materials available through other channels.

Since 1971, Church membership has grown by more than 11 million individuals, many of whom have never heard President Ezra Taft Benson’s “Beware of Pride” talk from April 1989 (given by President Gordon B. Hinckley, then First Counselor in the First Presidency) or watched Elder Bruce R. McConkie give a powerful testimony of the Atonement in April 1985, just before his death.

By April 2012, members will be able to access video and audio of several conferences from the 1970s, ’80s, and ’90s in English. By June 2012, online archives will feature audio and video of every conference from April 1971 (the year Church materials were correlated into the newly created Friend, New Era, and Ensign magazines) to the present.

“While the majority of Church members come to the general conference section of ChurchofJesusChrist.org to read, watch, and listen to thelatest conference addresses, many members are also interested in accessing past conferences,” said Elder Patrick Kearon of the Seventy. “The purpose of this initiative is to make conference messages much more accessible to members of the Church around the world.”

By June 2012, the Church will provide audio and video formats of conference addresses back to 2008 in more than 70 non-English languages on the conference section of ChurchofJesusChrist.org.

The Church is also working on adding music to the conference archives. Currently, members can listen to the Mormon Tabernacle Choir perform songs back to 2008 by clicking on “Show Music” at the top of each conference section on ChurchofJesusChrist.org.

Plans are in place to make the archives both online and offline through the Church’s mobile apps, such as the Gospel Library app, and other vehicles—such as the Mormon Channel on Roku, YouTube, and others—to help individuals access conference materials where and how they desire.

The Church first published a general conference report in its jubilee (50th) year (1880). The next conference to be recorded in a similar manner was the October 1897 Semiannual General Conference.

Since 1899, the Church has published an official Conference Report volume for each April and October general conference. Only one conference, October 1957, was canceled, due to a flu epidemic.

The Church History Department recently scanned all the Conference Reports in English since 1880 and placed them online in the Internet Archive, a non-profit Internet library.