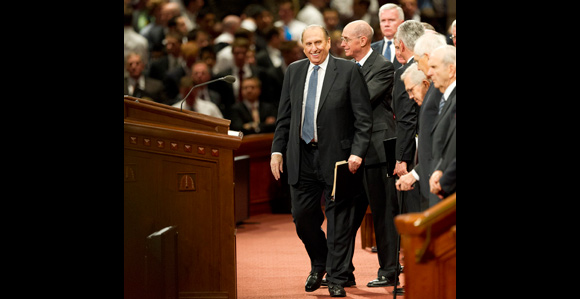 Find information and announcements from the 182nd Annual General Conference of The Church of Jesus Christ of Latter-day Saints at Church News and Events (news.ChurchofJesusChrist.org).

[Editor’s Note: This article will be updated throughout each session of conference.]

On March 31 and April 1, 2011, members participated in the 182nd Annual General Conference of The Church of Jesus Christ of Latter-day Saints. Updates of announcements from throughout the conference are listed below. Find full text of the talks in English on the conference archive page.

Experience general conference again at conference.ChurchofJesusChrist.org. Within hours after a conference session concludes, video and audio files of that session will be available in 12 languages in video format and in more than 70 languages in audio format. The Thursday following general conference, text of all talks will be posted in English at conference.ChurchofJesusChrist.org. The May issue of the Liahona and Ensign will feature conference addresses. More information on when conference materials will be available can be accessed online.

Following the Mormon Tabernacle Choir’s Music and the Spoken Word broadcast, President Dieter F. Uchtdorf, Second Counselor in the First Presidency, taught about the damage to relationships that comes from contention and the power of and need for forgiveness. He taught that the “mighty change of heart” required for this kind of change is precisely what the Atonement of Jesus Christ was designed to bring into our lives.

Sister Julie B. Beck, who was released Saturday as general Relief Society president, spoke about prophets’ vision for Relief Society, which, she said, could be summarized in three words: faith, family, and relief. She described how sisters today can live to align their lives and their Relief Societies with that vision.

President Thomas S. Monson closed the session, describing the fast pace of the world and encouraging the congregation to pause for moments of meditation to help them determine what is truly significant and what is trivial. He addressed the age-old questions of “Where did we come from?” Why are we here?” “Where do we go after this life?” He said: “We enter mortality not to float with the moving current of life but with the power to think, to reason, and to achieve.”

Speakers in the priesthood session of general conference taught about the power of priesthood holders to influence and rescue those who do not enjoy the blessings of the gospel in their lives.

Among those released during the Saturday afternoon session, were the members of the Presiding Bishopric and Relief Society general presidency. Elder Steven E. Snow of the Presidency of the Seventy was also released along with 37 Area Seventies.

Find a full list of those called and released, along with biographies of the newly called Church leaders on Newsroom.

In opening the session, President Thomas S. Monson thanked members of the Church for their devotion to the gospel, their care for each other, and the service they give in their wards and branches. He also thanked them for their prayers in his behalf. The prophet also talked about the work moving forward and reminded members of the Church to seek out that which is “good and uplifting.”

President Henry B. Eyring, first counselor in the First Presidency, spoke about adversity and about how to build a foundation on Jesus Christ sufficiently solid to help us withstand the adversity we encounter in life. He taught: “If we have faith in Jesus Christ, the hardest as well as the easiest times in life can be a blessing.”

President Boyd K. Packer taught about the capacity of children to teach and influence us and of the responsibility parents have in raising them. He also spoke about protecting and respecting family time and urged members to show devotion to their families.

During the general Young Women meeting, and between remarks from the Young Women general presidency and President Thomas S. Monson, young women of the Church around the world watched a new music video in which they were encouraged to “rise in strength of youth.”

Youth and others can now watch “Arise to the Mountain,” download an MP3 (with or without the words) of the song, or print the sheet music on youth.ChurchofJesusChrist.org. Audio and video of the meeting in multiple languages are available now on the general Young Women meeting archive page. English text is also available, and additional languages will be archived as they become available. “Arise to the Mountain” is also available on the archive page.