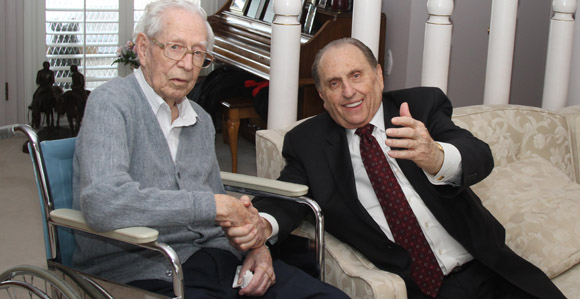 Believed to be the oldest man in Utah, Elder Smith lived longer than any former General Authority.

President Thomas S. Monson visited Elder Smith on his birthday, January 9, 2013. “Eldred Smith is my good friend,” said President Monson. “We have traveled many miles together. I love and respect this man.”

As a General Authority, Elder Smith traveled to stake conferences with individual members of the Quorum of the Twelve and was a frequent speaker at general conferences.

As a descendant of Hyrum Smith, Elder Smith inherited several artifacts that he displayed on various occasions.

Elder Smith married Jeanne Audrey Ness in 1932; they had five children. Following her death in June 1977, he married Hortense Child; she was then serving as a counselor in the Young Women general presidency. She died in May 2012.

The First Presidency of The Church of Jesus Christ of Latter-day Saints released the following statement on the passing of Eldred G. Smith: “The Church lost a valued friend and respected leader with the passing of Patriarch Eldred G. Smith. He was a man who lived a Christ-centered life as he faithfully served as Patriarch to the Church. We pray for the Lord’s blessing to be upon his family at this tender time.”