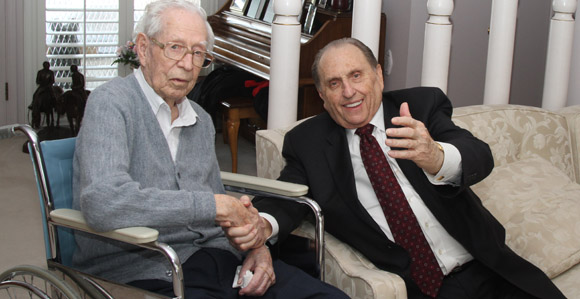 President Thomas S. Monson, right, visits with Elder Eldred G. Smith, who served as Patriarch to the Church from 1947 to 1979. Elder Smith turned 106 on January 9.

“Eldred Smith is my good friend. We have traveled many miles together. I love and respect this man.” —President Thomas S. Monson

After presenting a birthday card and a gift, a box of chocolates, President Monson placed a hand on Elder Smith’s shoulder and declared, “Eldred Smith is my good friend. We have traveled many miles together. I love and respect this man.”

Elder Smith served as Patriarch to the Church from April 10, 1947, until October 6, 1979. In 1966, then Elder Monson asked Church President David O. McKay for permission to invite the Church Patriarch to travel with him on an assignment to the South Pacific, the area that Elder Monson supervised, in order for Elder Smith to provide patriarchal blessings to members in areas where there was no patriarch. “I left him in Australia,” President Monson said, and then explained that as he continued on with his travels, Elder Smith remained behind and gave many patriarchal blessings to members in Australia and other areas of the South Pacific.

Elder Smith also traveled to other areas, including Europe, to give patriarchal blessings.

Believed to be the oldest man in Utah, Elder Smith has lived longer than any former General Authority.