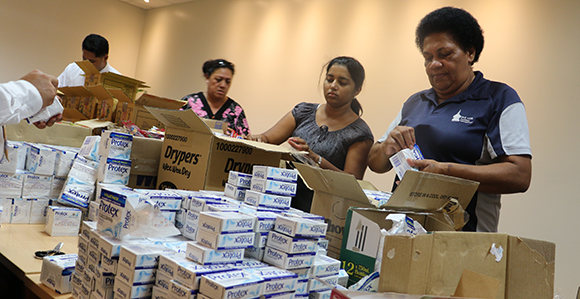 In response to a request from the Fiji Ministry of Health, Latter-day Saints in Suva compile 600 hygiene kits on Tuesday, February 23. The kits were shipped immediately to Northern Lau and Gau in Fiji.

“It is heart-wrenching to see the destruction and hear of the heartache across the nation.” —Elder Kevin W. Pearson, Pacific Area President

Three days after Cyclone Winston swept across Fiji, President Alipate Tagidugu of the Nausori Fiji Stake traveled from one village to another in his stake in the Pacific island nation.

“Before this was all green,” he said, speaking to a visitor and pointing the once-lush Fijian landscape. “Now it has turned to brown—just like a desert.”

President Tagidugu was checking on Church members, assessing needs, and organizing a priesthood and Relief Society response to the cyclone.

“All the crops have been ruined,” he reported. “The first priority for members is shelter. The second is food.”

The cassava, a staple in Fiji similar to potatoes, will last two to three weeks before going bad, he said. That will give Latter-day Saints and others in the villages time to find additional food sources.

The most powerful storm in the Southern Hemisphere in recorded history, the cyclone left 44 people dead and injured 122.

Some 45,000 people in Fiji sought refuge before and after the storm in evacuation centers; more than 1,000 of those needing shelter took refuge in 12 Latter-day Saint meetinghouses.

Fiji’s capital, Suva, located in the southeastern part of the main island of Viti Levu, experienced high winds and significant rainfall during the cyclone but was not directly in the storm’s path. The main storm moved across the island’s northern coastline and hit communities to the west. The islands of Koro, Tavenui, and Vanua Levu also received devastating damage.

No members or missionaries—who were brought into Suva to participate in the temple rededication and cultural celebration—were injured during the storm. Of the 38 LDS meetinghouses in Fiji, 27 have been inspected and 24 have minor damage.

Pacific Area President and a General Authority Seventy, Elder Kevin W. Pearson, was in Fiji during the cyclone. “It is heart-wrenching to see the destruction and hear of the heartache across the nation,” he said.

“We are praying and working for our brothers and sisters in Fiji. We will continue to do all within our power, working with others and with heaven’s help to alleviate suffering and help the people recover from this storm.”

At the Church's offices in Suva, members and missionaries worked in the days after the storm to assemble hygiene kits requested by the Ministry of Health. The kits, purchased with local goods, were put on boats to Gau and the Lau island group.

President Tagidugu knows the members of his stake will need some help to recover from the disaster. But he tells them not to wait for a government or a Church response before beginning to rebuild.

In the hours after the storm, he gathered the 15 families from Davedalebu Village. Each had sought temporary shelter in the Korovou Ward meetinghouse. “Right now we have to work together as a team,” he told them. “Whatever you have left, use it. Whatever food you have here, bring it together. Right now we are working together.”

Only two days later, when President Tagidugu returned, he found all the priesthood brethren in the ward rebuilding homes.

“It was really tough,” Siaki Vereuvia said of the storm. “Now we are helping.”

In Nasautoka Village where 20 homes were destroyed, Raijieli Daunisiga reported that her family had already put a new roof on their home. Her children were performing at the youth cultural celebration just before the storm, so the family weathered the storm in Suva at an LDS meetinghouse.

With others in the village, Sister Daunisiga had spent the day drying what she could in the warm sun.

“We are safe,” she said. “If we had stayed here [during the storm] I don’t know,” she added, pointing to the remnants of her home.

Manoa Seavu and his wife, Unaisi Liku, weathered the cyclone by crawling under the floorboards of their home.

“We sheltered underneath the floor,” Brother Seavu said, noting the family remained under the home from 4:00 p.m. until the sun rose the following morning.

“We will rebuild,” he said. 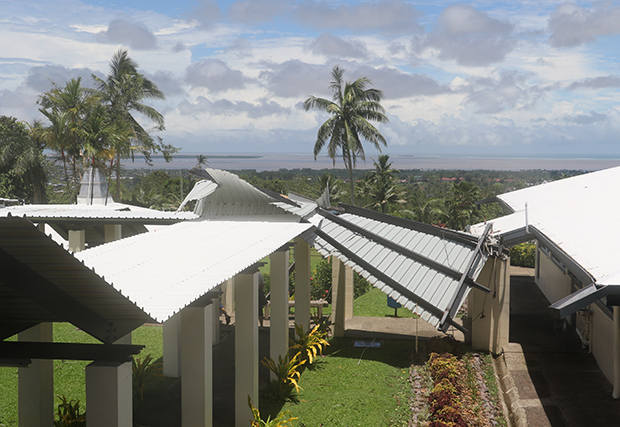 Damage from Tropical Cyclone Winston is seen at the Church College of Fiji. Photo by Sarah Jane Weaver. 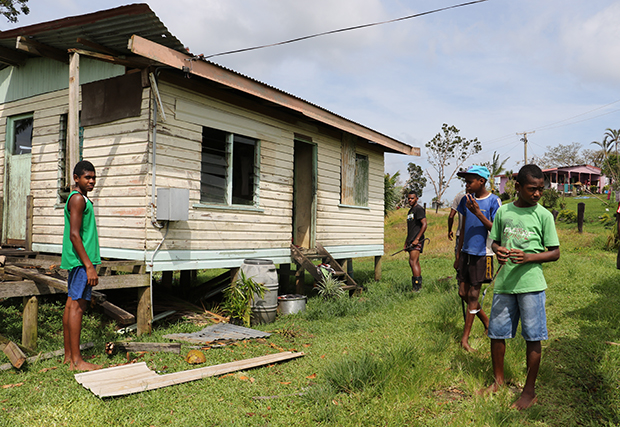 Members of the Nausori Fiji Stake work together to rebuild homes damaged by Cyclone Winston. Photo by Sarah Jane Weaver. 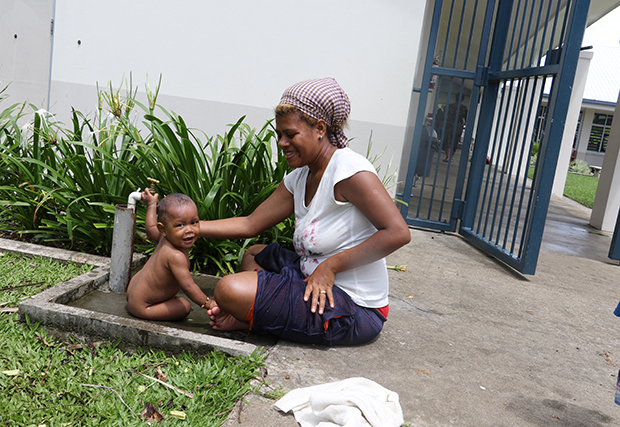 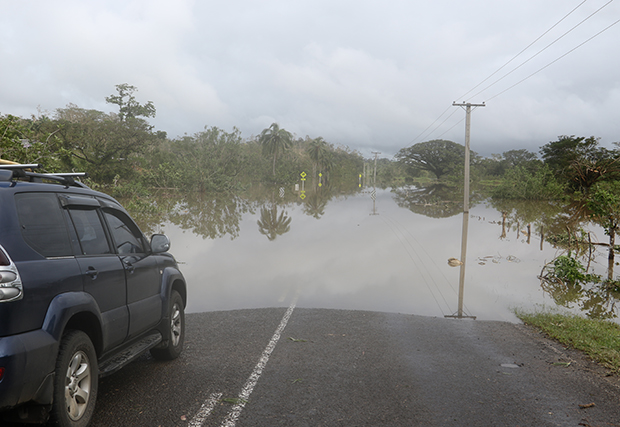 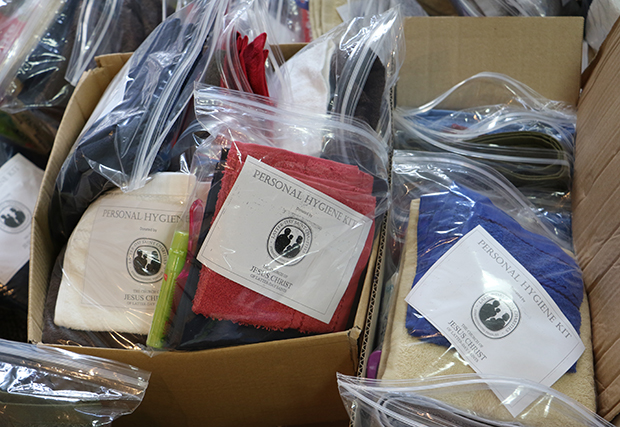 In response to a request from the Fiji Ministry of Health, Latter-day Saints in Suva assembled 600 hygiene kits on Tuesday, February 23. The kits were shipped immediately to Northern Lau and Gau in Fiji. Photo by Sarah Jane Weaver. 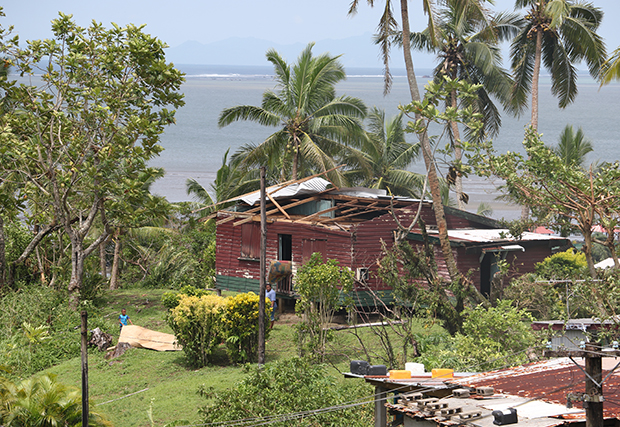 The roof blew off the home of Barney and Meroni Naivila Ross when Tropical Cyclone Winston hit Fiji on February 20. Photo by Sarah Jane Weaver. 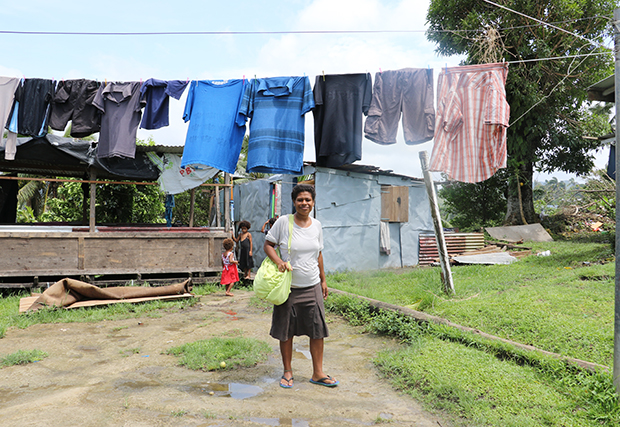 Ilisapeci Raiyaba works to dry clothes in the days after Tropical Cyclone Winston hit the Pacific island nation on February 20. Hundreds of people in Fiji lost homes during the category 5 storm, the worst in the history of Fiji. Photo by Sarah Jane Weaver. 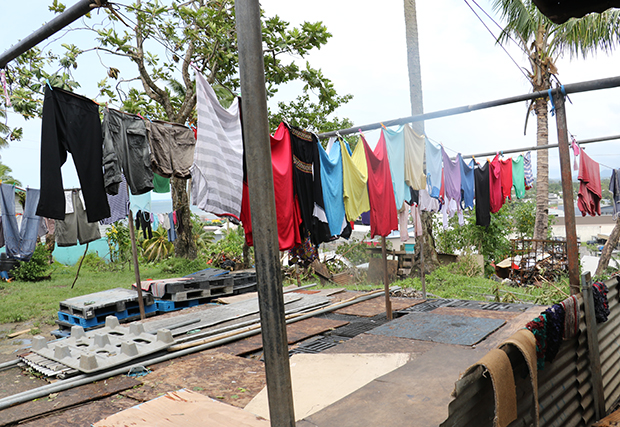 Victims of Tropical Cyclone Winston hang their clothes above the foundation of what was their home. Hundreds of people in Fiji lost homes during the category 5 storm, the worst in the history of Fiji. Photo by Sarah Jane Weaver. 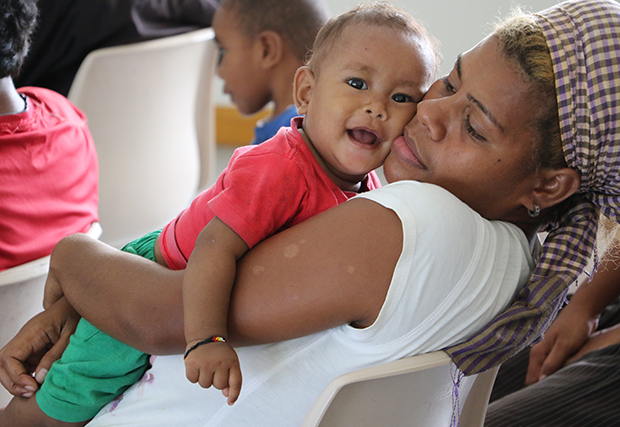 Matelita Lewatu holds her nine-month-old niece, Hinaraurea Tuahivaa Toqabale, outside the Lami 1st Ward meetinghouse—where her family went to stay after their home was destroyed by Cyclone Winston on February 20. Photo by Sarah Jane Weaver. 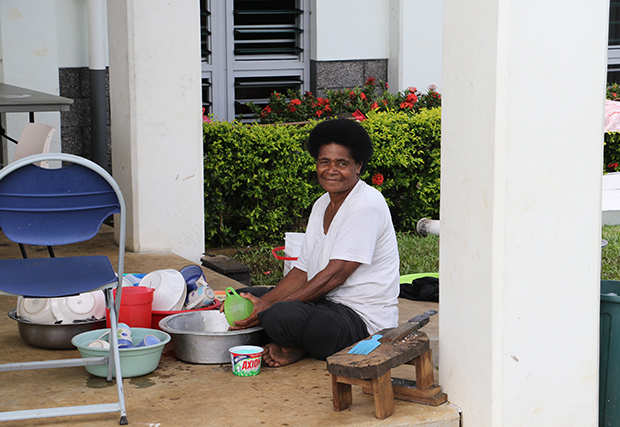 Anaseini Tabua and other members of the Nausori Fiji Stake gather at the LDS meetinghouse near their village. Many of their homes were destroyed by Tropical Cyclone Winston on February 20. Photo by Sarah Jane Weaver. 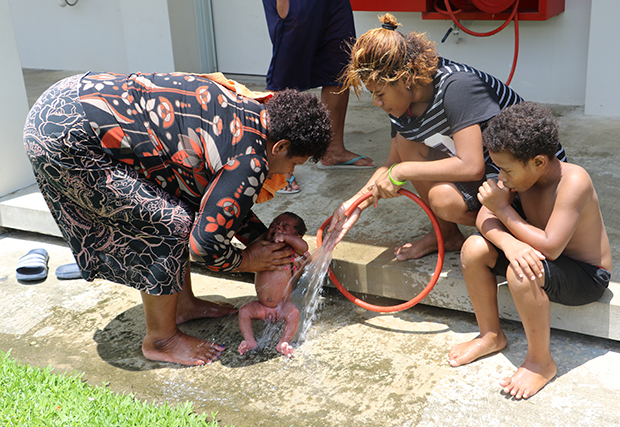 Seruwaia Bari Tanumi helps her daughter, Salote, bathe her four-week-old baby, Lasarusa, with a hose outside the Lami 1st Ward meetinghouse—where her family went to stay after their home was destroyed by Cyclone Winston on February 20. Photo by Sarah Jane Weaver.