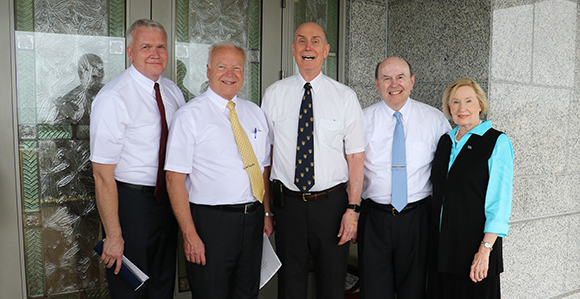 From left, Brook P. Hales, secretary to the First Presidency; Elder Kent F. Richards, a General Authority Seventy and Executive Director of the Temple Department; President Henry B. Eyring, First Counselor in the First Presidency; and Elder Quentin L. Cook of the Quorum of the Twelve Apostles and his wife, Sister Mary Cook, stand outside the Suva Fiji Temple.

After the winds and rain of Cyclone Winston pounded Fiji during a long and devastating night, the sun rose on the Pacific island nation—shining its light on the Suva Fiji Temple.

Standing in front of the temple hours after the storm hit Suva, Elder Adolf J. Johansson, an Area Seventy, recalled the devastating impact of the worst storm ever recorded in Fiji’s history.

Through it all he felt a “peaceful calm, a spiritual feeling that everything would work out OK and that the sun would shine” on the rededication.

Early in the morning after the cyclone, birds flew above the temple—a sign to Elder Johansson that the rededication would go on. “President Eyring came here to dedicate the temple, and he will do that,” he said.

No Latter-day Saints or missionaries were reported injured by Tropical Cyclone Winston, which struck Fiji with winds up to 175 miles per hour in the nighttime hours between the LDS Church’s youth temple cultural celebration and the temple rededication.

The powerful category 5 storm left at least five people dead, knocked out power, and destroyed entire villages as it made landfall along the north coast of Fiji's largest, most populous island, Viti Levu. Suva escaped the brunt of the storm, which shifted direction in the hours before it hit the Pacific island nation.

Government curfews, power outages, and downed trees on roads prevented many Fijian Church members from participating in the rededication, during which President Henry B. Eyring, First Counselor in the First Presidency, offered a dedicatory prayer on the temple and the people of Fiji.

As the storm approached, President Eyring moved from his hotel to the mission home, located on the grounds of the temple. With him were Elder Quentin L. Cook of the Quorum of the Twelve Apostles and his wife, Sister Mary Cook; Elder Kent F. Richards and his wife, Sister Marsha Richards; and members of the Church's Pacific Area Presidency—Elder Kevin W. Pearson, Elder O. Vincent Haleck, and Elder S. Gifford Nielsen, all General Authority Seventies, and their wives, Sister June Pearson, Sister Peggy Haleck, and Sister Wendy Nielsen. This allowed the official party to dedicate the temple in spite of mandatory curfews enacted across Suva in the hours after the storm.

“It was powerful that a member of the First Presidency and a member of the Quorum of the Twelve came here to experience this with us,” said Elder Johansson. “We never felt alone as members of the Church. We felt that the Brethren were with us. …

“They did not say, 'We are praying for you.' The message they brought is, 'We are here hoping and praying with you.’”

The temple rededication is the second temple dedication held during trying times in Fiji.

Amid political unrest, the Suva Fiji Temple was originally dedicated in a private service by then-Church President Gordon B. Hinckley on June 18, 2000. At that time, rebels were holding deposed Prime Minister Mahendra Chaudhry and other members of parliament hostage. Many businesses had been looted and significant parts of downtown Suva had burned. The military had declared martial law.

The 2000 dedication marked the only temple dedication since the original Nauvoo Temple that has been held in private and difficult circumstances, said Elder Cook, who attended the original dedication.

Elder Johansson said it was important to the Latter-day Saints in the temple district that the rededication go on—in spite of the storm.

As strong winds raced across the nation, “you could feel the tension in the air,” he said. Yet Elder Johansson said he was not afraid.

The Latter-day Saints who could not attend the rededication will find peace in the weeks and months ahead in the temple, he said.

“You cannot stop the work of the Lord. You cannot. … That is what is giving the people of Fiji courage. If they can’t come [to the dedication] the temple will be open for them. … I believe the Lord requires of us not a sacrifice of money but a sacrifice of faith. Their faith through this experience taught the people who is in charge.” 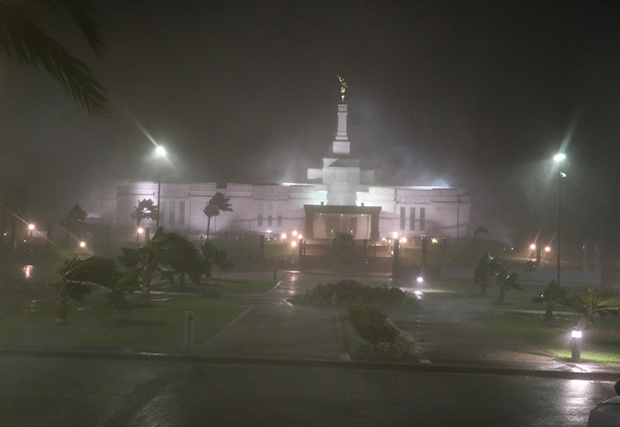 The storm passing is the least of the miracles, he said. “The greatest miracle will be the ordinances that will be performed” in the temple.

Crews used generators to power the temple and the grounds during the rededication services—as most of the power in Fiji was lost during the storm. 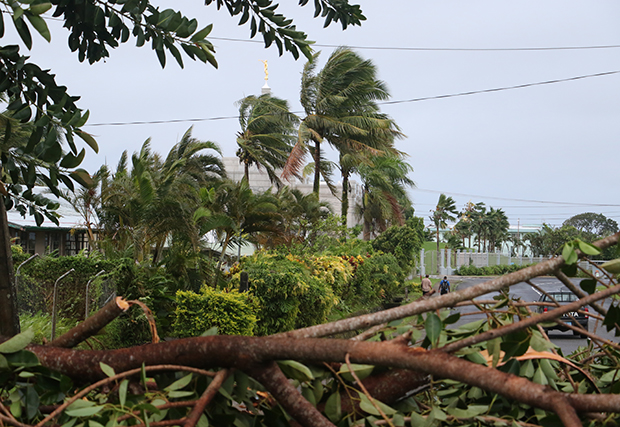 The 12,755-square-foot temple, which closed in October 2014 for renovation, serves more than 35,000 Latter-day Saints in Fiji, Vanuatu, Kiribati, and the Solomon Islands. Because so many members could not participate in the meeting, President Eyring approved the rebroadcast of the dedicatory services for one week later, on Sunday, February 28. 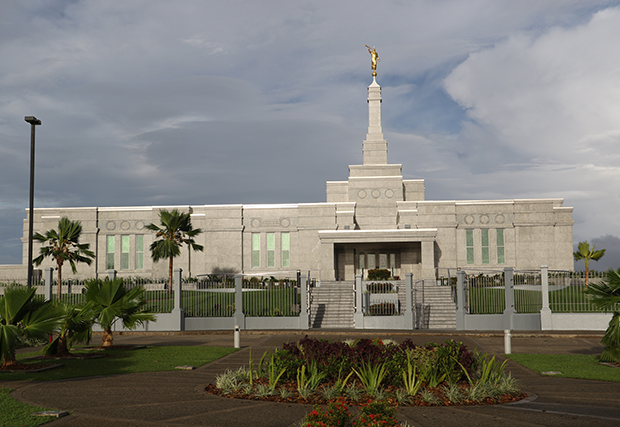 In the hours after Cyclone Winston hit Fiji, birds flew above the Suva Fiji Temple and the sun rose, shining bright light on the building used by mariners as a guide to navigate their boats safely into the Fijian harbor. Photo by Sarah Jane Weaver.

The renovated temple pays tribute to the history and rich culture of the islands of the South Pacific. The colors and design motifs of the temple were inspired by the flowers, beaches, and jungles of Fiji. The interior of the temple features original art glass and a hand-painted mural depicting the landscape and flora of the islands. 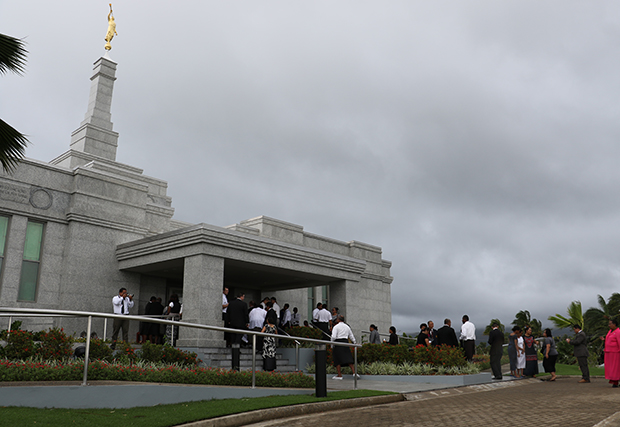 A large tree fell in her yard during the cyclone, nearly blocking her path to the temple. Then she and her husband, Meli, were stopped by police enforcing mandatory curfews in Suva. However, when the couple explained they were going “to the dedication of the temple of the Lord” they were allowed to travel on.

Vito W. Qaqa, president of the Fiji North Stake and local chairman of the Suva Fiji Temple rededication committee, was up all night before the rededication because a sliding door at his home collapsed during the storm, bringing water and wind inside. When power outages prevented him from opening a metal gate to make his way to the rededication, he removed a grill in the gate and, with his wife, slid through.

“No one will stop this work,” he said. “We are so blessed in Fiji. Now we have a Church school and a temple. We have everything we need. They are preparing Fiji for bigger things.” 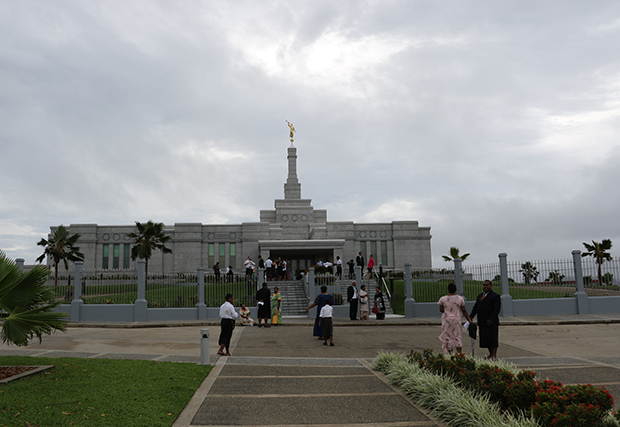 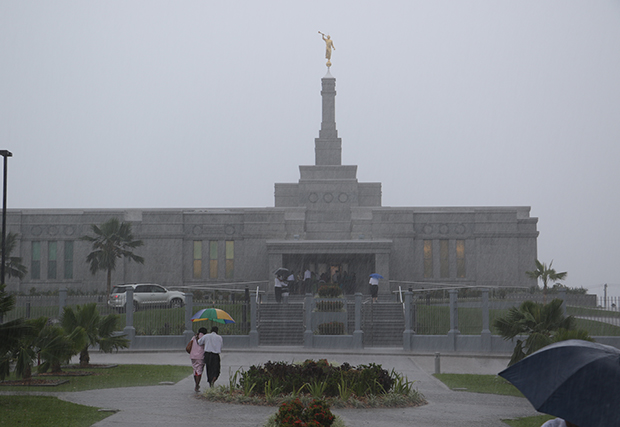 Heavy rain falls outside the Suva Fiji Temple before the third and final rededication session. Cyclone Winston made landfall hours before President Henry B. Eyring rededicated the temple on Sunday, February 21. Photo by Sarah Jane Weaver. 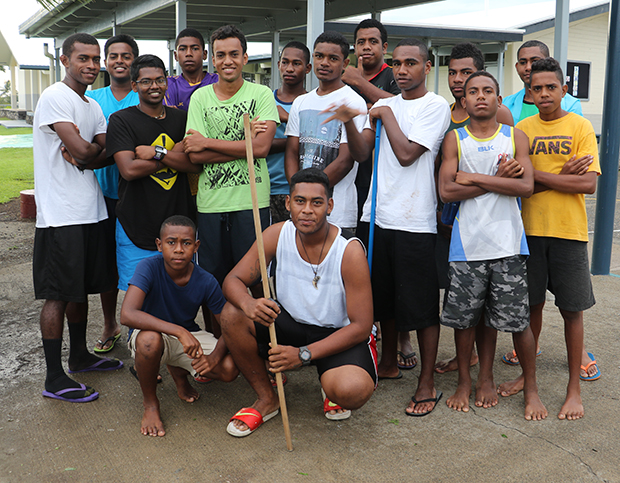