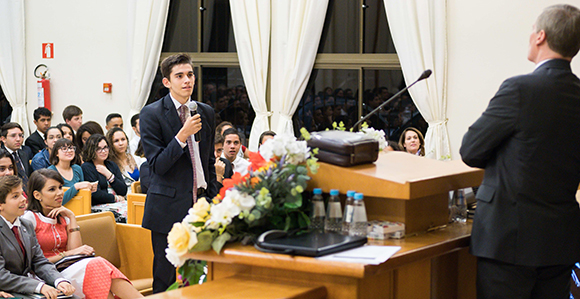 A young man in Sao Paulo asks Elder David A. Bednar of the Quorum of the Twelve Apostles a question during a youth meeting.

“There is a lot to learn about living and loving the gospel from the Saints in Brazil.” —Elder David A. Bednar of the Quorum of the Twelve Apostles

The question posed by a 16-year-old young woman during a youth meeting in Recife, Brazil, caused Elder David A. Bednar of the Quorum of the Twelve Apostles pause, but not surprise.

“Elder Bednar,” said the teen, “What would you teach us about receiving the blessings of the Savior’s Atonement in our lives every day?”

The “spiritual depth and simplicity” of the question was one more indication of the “increasing strength and greater maturity” of the Church in the South American country, Elder Bednar remarked.

“There is a lot to learn about living and loving the gospel from the Saints in Brazil.”

Elder Bednar and his wife, Sister Susan Bednar—accompanied by Elder Juan A. Uceda of the Presidency of the Seventy—traveled to Recife, Sao Paulo, Salvador, and Brasilia from March 1 through March 12.

Home to 1.4 million Church members, 34 missions, and six temples, Brazil’s strength is evident in the increasing number of Brazilian mission presidents and General Authorities serving around the world. Family history work by members in Brazil is producing nearly 100 percent of the names for temple ordinances in the country. Elder Marcos A. Aidukaitis, Elder W. Mark Bassett, and Elder Adilson de Paula Parrella, Brazil Area Presidency, report that youth ages 12 to 18 are participating in LDS activities at increasing rates, even though almost 50 percent have parents who are not members of the Church.

During youth meetings in Brasilia and Sao Paulo, more youth gathered to meet with Elder and Sister Bednar than could fit in the buildings. Undaunted, they also filled overflow locations and responded to Elder Bednar’s request for questions with the aid of technology.

Looking into the faces of Brazilian Latter-day Saints, Elder Bednar was struck by their eagerness to learn. 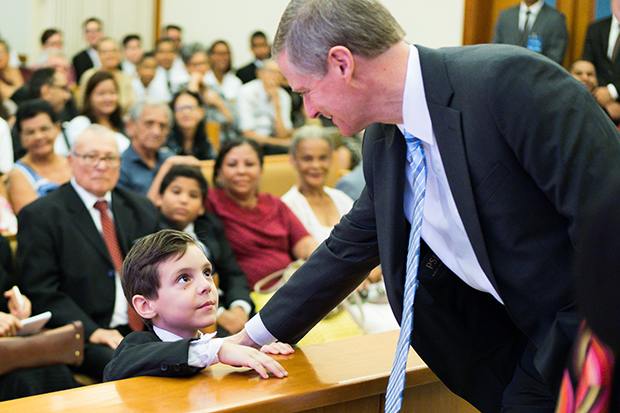 Elder Bednar greets a child and tells him to “be a good boy” after a stake meeting in Recife, Brazil.

The Church has been established in Brazil for eight decades and has seen tremendous growth in numbers. But the real growth is seen in the leadership abilities and qualities of its members, according to the Area Presidency.

“We believe that the Church in Brazil is at the very beginning of its growth and that its future potential is tremendous,” said Elder Aidukaitis. “Even beyond the borders of Brazil we see Brazilian members contributing to communities throughout the world.”

Although spiritually mature, Latter-day Saint youth in Brazil face tremendous challenges, report the Area Presidency. “The youth see the instability of our country and the sadness of those who have chosen other paths,” said Elder Bassett. “The Church is an anchor to the youth in the very turbulent waters of Brazil.” 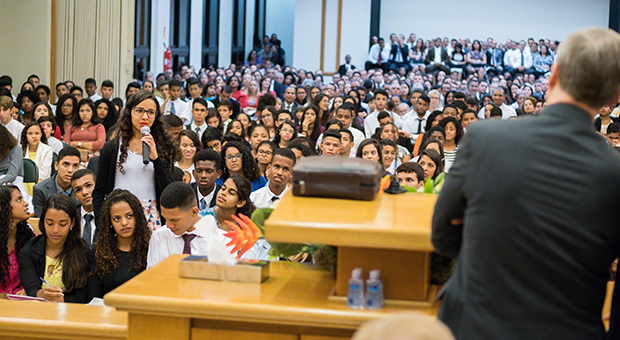 A young woman in Recife, Brazil, asks a question of Elder David A. Bednar of the Quorum of the Twelve Apostles.

In Brasilia, Latter-day Saints drive by the future temple site and visualize the house of the Lord that will be built there. Members in the northeast of Brazil exchange pictures as temple construction progresses, said Elder Parrella.

Similar enthusiasm is shared for the future temple in Rio de Janeiro—where “crime is on the rise and political challenges prevail.”

“The Rio temple is a beacon of hope for a troubled city,” said Elder Bassett. “The members know that the temple will bring great blessings to the city as the members faithfully participate in temple service.”

With a growing membership, “Brazil is no longer a new frontier in the Church,” said Elder Bednar. “Brazil is posed to become an important contributor to the Church in all the world.”

Church members are also a great influence for good in their own country.

In addition to conducting an area review and a priesthood leadership conference during his trip, Elder Bednar offered the keynote address on religious freedom during an interfaith dinner in Sao Paulo.

Brazil is a religious country—evidenced by important cities named after ancient prophets, the Savior, and even a state named Espïritu Santo (Holy Ghost), said Elder Bassett.

“Religion is vibrant in Brazil, and our people are people of faith in God,” said Elder Aidukaitis.

Elder Bednar met with some 50 religious and opinion leaders in Brazil to discuss the importance of defending religious freedom and strengthening families.