“When we reach out as a Church and make donations to people who have experienced the woes of life, we’re demonstrating our love for our neighbor” —Elder Ian S. Ardern, General Authority Seventy

As bushfires devastated much of Australia throughout the summer months in 2019 and early 2020, some 46,000 acres of land were burned. Over 9,000 homes and buildings were destroyed by the fires, and 34 Australians died in the wake of the disaster.

Among the areas hardest hit by the bushfires is the small island off the south coast of Australia known as Kangaroo Island. More than half of the island’s 1,701 square miles were burnt by the fires, and many families and farmers lost their homes and livelihoods.

Known as the “Ravine” fire, the fire on Kangaroo Island was first reported on December 30, 2019, and burned for weeks before firefighters were able to get it under control. Two local property owners lost their lives in the fight as the fire destroyed more than 200,000 hectares of land.

Pulling from humanitarian funds contributed by Latter-day Saints around the world in response to the devastating fires in Australia, Elder Ian S. Ardern, a General Authority Seventy and Pacific Area President, traveled to Kangaroo Island on Saturday, March 14, to make gift donations to residents on the island affected by the fires, Newsroom reported.

Members and missionaries of the Church in the Adelaide Australia Mission assembled gift wallets containing three $100 vouchers along with self-help ideas and messages of love and support, which Elder Ardern delivered to families on Kangaroo Island.

“When we reach out as a Church and make donations to people who have experienced the woes of life, we’re demonstrating our love for our neighbor,” Elder Ardern said, emphasizing the importance of God’s two great commandments.

Four fully equipped trailers were also given as a donation to Blaze Aid, a nonprofit organization that helps repair rural fencing destroyed by natural disasters.

Kangaroo Island Branch president Shaun Hinves and his wife Anthea led the group of visitors on a tour around the island. As a professional beekeeper, President Hinves is one of the many locals whose livelihoods have been severely impacted by the fire.

While visiting the island, the group met with Kangaroo Island mayor Michael Pengilly and several of the families impacted by the fire.

Mayor Pengilly showed great appreciation for the Church’s donations and noted that the items donated will have a positive impact on the island.

Showing his optimism for the future, Mayor Pengilly told Newsroom reporters, “We will get there.”

After visiting some of the homes of members impacted by the fire, Elder Ardern said he was moved by the resilience of the families and their ability to rebound after the devastating effects of the fire, according to Newsroom. He expressed his gratitude for being able to visit the island and members who had donated to the Church’s humanitarian fund worldwide.

“When we are in the service of our fellowmen, we’re really in the service of our God,” he said. “So I take a moment just now to thank all those people around the world who have so kindly and compassionately and graciously donated to the Church humanitarian funds. I’m here today on their behalf as well. So may God’s blessings be with them. At this moment, we are indeed all fellow citizens in Christ.” 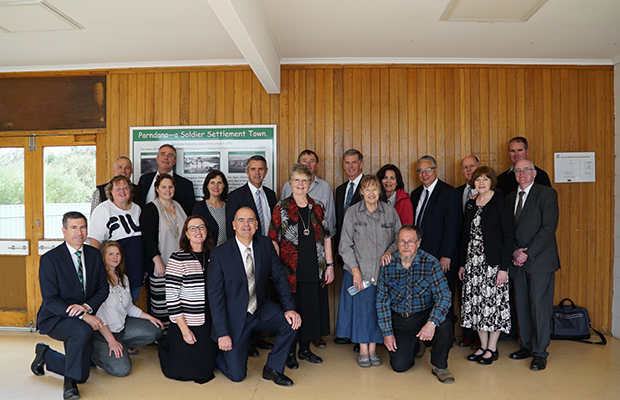 Church and community representatives participated in a humanitarian donation hand-over on Kangaroo Island on March 14, 2020. Island residents are recovering from catastrophic fires in late 2019 and early 2020. 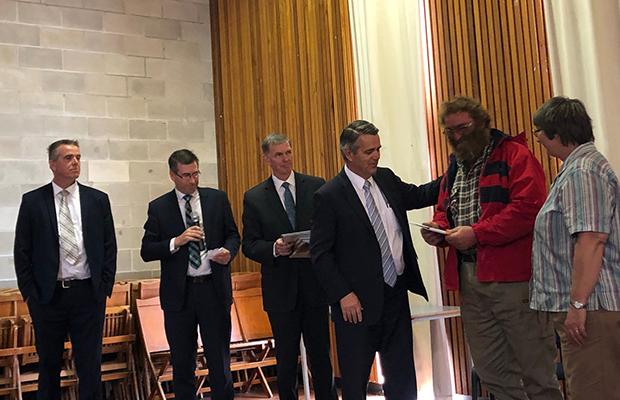 Elder Ian S. Ardern presents a donation from The Church of Jesus Christ of Latter-day Saints to a Kangaroo Island family following bushfires that destroyed 65 homes on the island earlier this year.