Church leaders emphasized the importance of teaching repentance and baptizing converts and announced changes affecting missionaries’ daily schedules and how they report progress in the work during a recent worldwide missionary training broadcast.

Missionaries, wherever they are serving around the world, were invited to sit in for a meeting of the seven-member Missionary Executive Council at Church headquarters in Salt Lake City on January 25.

Elders and sisters numbering nearly 71,000 in 422 missions of the Church viewed the meeting via the worldwide missionary training broadcast.

“It’s unusual to broadcast to all the missionaries in the world,” acknowledged Elder Dallin H. Oaks of the Quorum of the Twelve Apostles in a brief Church News interview.

“This is only the second time that it has been done,” he said, mentioning that the first time was one year ago. “We did it again because we had reports that it worked well last time.”

As part of the council meeting and broadcast, Elder Nielson announced some changes. One was a new daily schedule for missionaries, allowing greater flexibility in how they use their time and greater adaptability according to the area in the world where missionaries are serving. The other change is a reduction in the number of “key indicators” that missionaries report to measure progress in their work.

Though substantial news media coverage has already been given to those changes, “the main emphasis was teaching repentance and baptizing converts,” Elder Nielson told the Church News, noting that three-fourths of the two-hour broadcast was “on how to be better missionaries and how to be better teachers.”

Elder Nielson drew attention to the “Missionary Purpose,” posted in large lettering on the wall in the reception area.

“Your purpose as missionaries is our purpose,” he said, “to invite others to come unto Christ by helping them receive the restored gospel through faith in Jesus Christ and His Atonement, repentance, baptism, receiving the gift of the Holy Ghost, and enduring to the end.”

Much of the discussion during the meeting pertained to video clips of presentations given at last year’s broadcast by Elder Oaks, Elder Bednar, and Elder Andersen. 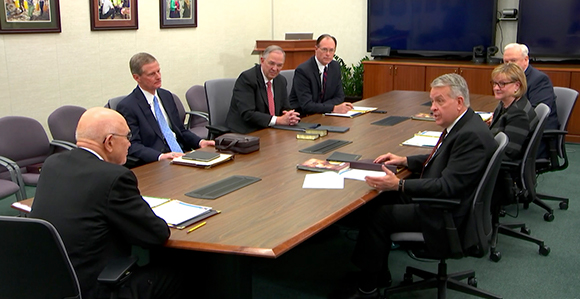 A meeting of Missionary Executive Council was broadcast to nearly 71,000 missionaries around the world January 25.

An excerpt from Elder Oaks’s talk was viewed in which he identified the doctrinal purpose of missionary work as being “to teach repentance and baptize converts to the gospel of Jesus Christ.”

After the video clip was shown, Elder Nielson asked how a missionary can know if he or she really understands the doctrine of Christ.

“Surely a first step,” Elder Oaks replied, is for them to keep in mind the sequence of repentance, baptism, and the gift of the Holy Ghost.”

Elder Bednar added, “The Prophet Joseph Smith said that the more we learn about faith in Christ the more we will focus on faith in Christ. So there are a number of topics that might be at the periphery that would be removed from our focus if we are really beginning to understand the doctrine of Christ.”

Elder Andersen remarked, “While living the gospel is not that easy, understanding the gospel is not that difficult. Sometimes, as young missionaries you wonder, ‘Do I know enough? Can I teach it?’ But in effect, if you remember your purpose, you talk about faith in the Lord Jesus Christ, repentance, baptism, the gift of the Holy Ghost, enduring to the end—you have the major elements and you build around those.”

Elder Oaks then emphasized, “Missionaries, you won’t be able to preach repentance unless you practice repentance yourselves in your personal lives and in the course of your missionary activities.” 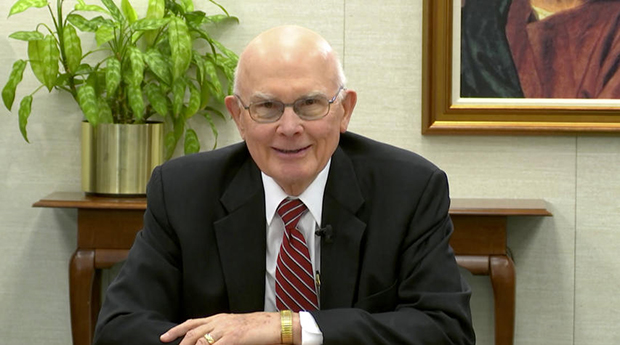 Elder Dallin H. Oaks of the Quorum of the Twelve Apostles addresses missionaries worldwide during a January 25 training broadcast.

“If they’re constantly measuring themselves against those five things, that’s evidence that they truly understand the doctrine of Christ,” he said.

Elder Nielson then posed the question of what the best way is for a missionary to teach the doctrine of Christ.

“They have to be living it themselves,” Sister Oscarson responded. “Probably one of the most important aspects of this is to be experiencing repentance daily in their lives—not see repentance as something you only use when you’ve committed some of the big sins, but it’s a daily course correction in their lives. And if they come to understand that principle of repentance, I think they’ll be able to testify of its value and effect in the lives of those they are teaching.”

A bit later in the broadcast, Elder Bednar said that, too often, members of the Church have a “cookbook” or a “checklist” mentality about living the gospel, treating faith, repentance, baptism, and receiving the Holy Ghost as separate items.

“All things are gathered together in one in Christ,” he said, “so faith is in the Savior, in Him as the Son of God, in His nature and attributes. Repentance is depending upon Him. Following Him is baptism. Pressing forward with Him is enduring to the end with the companionship of the Holy Ghost. It’s all gathered together in Him.”

Touching on that later, Elder Bednar added, “In my judgment there is little or no spiritual power in treating these fundamental elements of the doctrine of Christ as separate things. It’s when they’re tied together … that there is power.”

Elder Oaks then said, “Missionaries, I hope you have listened carefully to what Elder Bednar has just said. It may be one of the most important principles that is taught in our worldwide broadcast today. Baptism is not just something that you raise with an investigator as soon as possible to get a commitment. It is something that must be put in the context of the entire gospel of Jesus Christ. Then a baptismal commitment will be timely and persuasive and will fulfill its purpose, and the time that commitment is made or that subject is raised should vary according to the circumstances of the individual being taught and according to the promptings of the Spirit.”

“I think what we’re saying,” Elder Andersen added, is that baptism is part of the doctrine of Christ and no missionary should take that out of their vocabulary. … We don’t set it aside. We think about it. We talk about it with each other and with those who are involved in the process of conversion.”

Near the end of the broadcast Elder Nielson said the First Presidency and the Quorum of the Twelve Apostles have announced changes to the missionary daily schedule and to key indicators.

The purpose of the new daily schedule, he said, is to help missionaries be more productive each day, set more inspired goals, and plan more effectively, be more healthy, and use their agency to make righteous decisions about how best to spend their time.

He gave an example of a missionary daily schedule.

“A missionary would arise at 6:30. That missionary would pray, exercise for 30 minutes, shower, eat breakfast, prepare for the day. You will notice that we have changed the time for planning to be in the morning rather than during your evening schedule. And we would also have personal study remain during morning time.”

“This gives you flexibility in your schedule,” Elder Nielson told the missionaries. “You can do these things during down time or during the time when you’re at the chapel; you don’t need to go back to your apartment to do these things.”

Missionaries, under the sample schedule, would return to their living quarters by 9 p.m. (9:30 if they are with an investigator) and write in journals, prepare for bed, and pray before retiring by 10:30 p.m.

“You may be serving in a country where that schedule will not particularly work for the culture where you live,” Elder Nielson noted.

For example, in Latin America, the schedule could be adapted to have missionaries arising at 7:30, going out to work at 11 and then returning at 10 p.m. In Africa, where it is important for missionaries to be in before dark, waking time might be at 6 a.m. with proselytizing from 8 a.m. to 6 p.m. and dinner, personal study, and other things done before retiring by 9 or 10 p.m.

The once-a-week preparation day schedule has also been altered to allow missionaries more time to accomplish things that must be done on that day: laundry, grocery shopping, cleaning living quarters, communicating with family, study and recreation, and exercise. Accordingly, companionship study, language study, and 12-week study will no longer be done on preparation day.

Proselytizing on preparation day will be begin at 6 p.m. and end at 9 p.m. 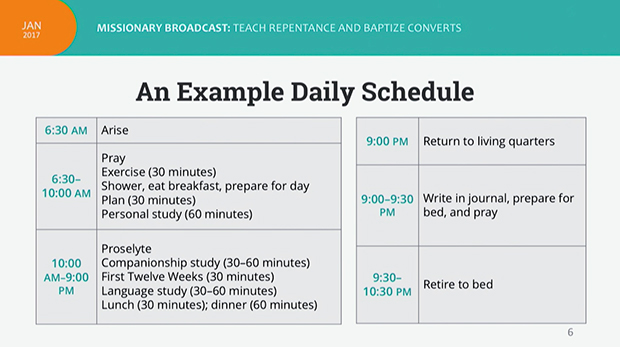 A sample of the daily schedule was displayed during the worldwide missionary training broadcast to illustrate changes that were announced.

“The thing I love about this new schedule is that it allows the missionaries to exercise their agency to determine how to best use their time,” Sister Oscarson said. It shows that the Lord trusts them to use their time wisely, to be inspired as to how to use their time and to make adjustments as needed that will benefit them.

In a Church News interview, Elder Nielson noted that because it has reduced required study time, the change in the daily schedule has as its net effect that missionaries will actually be out working an hour and a half more each day.

Regarding key indicators, Elder Nielson said in the broadcast that the Missionary Department has learned that key indicators are powerful but they do not describe all that leads to conversion; that too many key indicators can cause missionaries to lose focus on their purpose, which is to teach repentance and baptize converts; that there are a few indicators that clearly are “key” to convert baptisms; and that all the principles found in the missionary guide Preach My Gospel are important and should be applied.

“My wife and I were very grateful to be able to listen to the worldwide missionary training broadcast last week,” said President E. Keith Stutznegger of the Mexico Mexico City Southeast Mission via email. “We were encouraged to hear the invitation to allow the missionaries to have increased flexibility in their daily schedules. We have repeatedly taught them that they ‘are agents unto themselves.’ We fear they have been so regimented in their schedules that they lack deciding power to make good and correct choices on their own.”

He said missionaries in the mission have already shown excitement over the changes.

One such missionary is Elder Leonardo Arroyo of Aguascalientes, Mexico. He identified two aspects that he really likes: “We now have more time to do the work of the Lord” and “It allows us to be our own agents.”

Elder Angel Alverio of San Juan, Puerto Rico, said of the changes: “The four [indicators] that we now will only report will help us focus on what truly makes a difference. Before, we worked for ‘numbers.’ Now we focus on indicators that will truly measure changes that lead to see that our investigators are making changes in their lives (repentance), and we can lead them into the waters of baptism. I am more excited to look for ‘new’ investigators who want to hear our words and come to Christ.”

Elder Dallin Miller, from Tucson, Arizona, said, “The perspective of how we plan, find, and teach as missionaries has changed as we are now invited to depend less on ourselves and more on the Spirit. We are able to maximize our time and efficiency in order to find the people that God and angels are preparing to hear this gospel message. It’s a great time to be a missionary.”