Be Faithful Disciple-Scholars Even in Difficulty, Elder Holland Says at Maxwell Institute 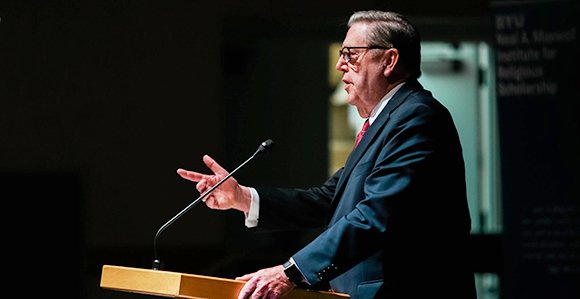 Elder Jeffrey R. Holland of the Quorum of the Twelve Apostles speaks during the annual Neal A. Maxwell Lecture held at BYU, this year on November 10. Photo by Claire Gentry, The Daily Universe.

“If we do our work well today, we can make things better for those who will come in troubled times ahead, those prophesied times before that day when Christ Himself will rule and reign.” —Elder Jeffrey R. Holland of the Quorum of the Twelve Apostles

In June of 1970, Jeffrey R. Holland, then a young graduate student in New Haven, Connecticut, read an article in the Church News about the newly appointed commissioner of the Church’s educational system, Neal Maxwell.

Although he did not know Brother Maxwell at the time, Elder Holland said of the new commissioner's background, “I was very impressed.”

Several years later, with his dissertation moving along and decisions arising such as “after this degree, what?” he decided to call Neal Maxwell for advice.

“As I look back on it, that was a silly, embarrassing thing to do—some insipid graduate student Brother Maxwell had never met asking via a telephone call what he should be when he grew up,” Elder Holland told laughing listeners during the 2018 Neal A. Maxwell Lecture at Brigham Young University on November 10.

But Commissioner Maxwell—who was later called to be a member of the Quorum of the Twelve Apostles just a few years before Elder Holland was sustained to the same quorum—could not have been more gracious in his manner, nor more generous with his time, Elder Holland recalled.

“That phone call started a professional, then personal, then apostolic friendship that will continue warmly and wonderfully forever,” he said. “Suffice it to say that second only to some very profound experiences in prayer in New Haven, the fact that I would pursue a teaching career in the institute program of the Church—clearly the least exciting and least Ivy League-like choice available to me—was due in large measure to that and subsequent conversations with Neal A. Maxwell. Little did I know that one day I would succeed him as commissioner of education nor that I would ever sit with him in the Quorum of the Twelve Apostles.”

That personal relationship was one of the motivating factors of his lecture on November 10, titled “The Maxwell Legacy in the 21st Century.” Elder Holland, who served as the ninth president of BYU from 1980 to 1989 as well as commissioner of education for the Church and was the dean of the College of Religious Education at BYU, understands the purposes of the Maxwell Institute as a place for gathering and nurturing academic scholarship through “disciple-scholars,” a term Elder Maxwell often used to describe those in academic life who always remember their commitment to the gospel.

According to the Maxwell Institute’s mission statement, “As a research community, the institute supports scholars whose work inspires and fortifies Latter-day Saints in their testimonies of the restored gospel of Jesus Christ and engages the world of religious ideas.”

The group is a gathering place for scholarly research about religion—specifically about The Church of Jesus Christ of Latter-day Saints.

Speaking to a capacity crowd in the Joseph Smith Building on the university’s Provo campus, Elder Holland explored the importance of scholarship and discipleship and how, in both, representing the Savior is most important.

“I care about [Elder Maxwell’s] name, about the life he lived, the legacy he left, and the legacy that will run on into the 21st century and beyond,” Elder Holland said. “In great measure the Neal A. Maxwell Institute for Religious Scholarship will, for good or ill, be the means of communicating much of that legacy to an ever-younger, ever-newer generation in the Church who never heard Elder Maxwell’s voice, nor delighted in his prose, nor felt the fire of his faith.”

Elder Holland told the crowd of scholars and students, “We are at a moment in His Church, the Savior’s Church, when there is a demonstrable, near-tangible hastening of the work. These continue to be the latter days with no one knowing when that last ‘last day’ is going to be.”

The Maxwell Institute at BYU has an important—and exciting—part in the future of the Church.

Continuing revelation to prophets, seers, and revelators is significant and will continue to be evident in the guidance of the Church. Just as an individual must “open the door” and allow Christ into his or her life, so does the Maxwell Institute in the academic world.

“How do we best and most warmly open that door, personally and professionally, and on what do we sup when the Master is admitted?” he asked. He noted that with such good hearts and minds laboring so faithfullly, conversations in the Maxwell Institute will be consistent in every way with His gospel, His grace, His life, His loving, persistent plea to “Come, follow me.”

The Maxwell Institute at BYU has an important responsibility and opportunity to reflect the Savior and His doctrine in all that it does, especially with other academic groups not of our faith.

Recognizing the missions of the Church and of BYU are not identical, Elder Holland spoke of how their missions will always be consistent with each other.

“And in the case of the Maxwell Institute, they must come as close together as an ecclesiastical sponsor and an academic recipient of that sponsorship can be,” he said. “So if the university is to reflect the best the Church has to offer by way of a world-class academic endeavor, no apologies to anyone, then the Neal A. Maxwell Institute must see itself as among the best the university has to offer as a faithful, rich, rewarding center of faith-promoting gospel scholarship enlivened by remarkable disciple-scholars.”

Elder Maxwell often spoke of the “disciple-scholar” and the commitment to seek learning with “full intellectual stretching” and that not all truths are of equal importance.

“The spiritual half of that union was always the more important,” said Elder Holland. He later added, “But the wonderful thing with Elder Maxwell, and the thing I want for all of us, is that it didn’t have to come down to a choice between intellect and spirit. In a consecrated soul—and consecration was one of his favorite doctrinal concepts—they would be aligned beautifully, a perfect fit, a precise overlay.

“But if it did come down to a choice, it would be faith, the yearning, burning commitment of the soul, that would always matter most in the end.”

“Take heart, we are going through the same exercise at Church headquarters, addressing a whole host of adjustments that are necessary in our own departments, our own printed materials, and public communications,” he said. “We know this assignment will give you heartburn, but it doesn’t rank with the Missouri persecutions, so dive in.”

He later added, “But as with all such challenges in gospel life, I see the requirements to adjust that name as being a blessing not in disguise. A unique name reflecting language given by the Savior Himself will be one way of sending a signal that we are different—sometimes a lot different—out here in Provo, Utah. Of necessity we will often be ‘a peculiar people’ in the academy as well as in other arenas of life.”

Unlike other universities and institutions with departments or courses dedicated to studying the Church in a purely intellectual and historic way, BYU provides scholarly dialogue within a spiritual context.

“I am not suggesting our BYU approach to scholarly discussions with those not of our faith has to start with slides of your mission and end with an anthem from the Tabernacle Choir at Temple Square—notice that modified name,” he said. “But any scholarly endeavor at BYU—and certainly anything coming under the rubric of the Maxwell Institute—must never principally be characterized by stowing one’s faith in a locker while we have a great exchange with those not of our faith. … 'Bracketing your faith' is what those in the field call it and it does not apply at Brigham Young University.”

Not only does bracketing one’s personal faith limit truth claims and moral judgments, it has often cost scholars credibility with readers because “no one knows exactly where authors are coming from ideologically.” Fortunately that won't be the case at BYU.

Elder Maxwell taught that a person is not really “learned” if they exclude the body of divine data that the eternities place at a person’s disposal through revelation and the prophets of God.

Quoting from Elder Maxwell, Elder Holland said, “‘The highest education, therefore, includes salvational truths,’ thus the invitation to include in your scholarly backpack the body of ‘divine data’ that the eternities have placed at our disposal. We are to use salvational truths whenever and wherever we can.”

Although there are some limitations regarding what can be shared in a setting that is not under our control, there are many topics that Church members and scholars can share “without compromising their unique Latter-day Saint characteristics.”

“Beloved colleagues, if we do our work well today, we can make things better for those who will come in troubled times ahead, those prophesied times before that day when Christ Himself will rule and reign, that eschatological moment against which I increasingly measure both my own personal worthiness and that of the Church generally. In that regard, we all need to do what we can in the hour we have been given, acknowledging as the later Nephi did that ‘these are [our] days.’”

J. Spencer Fluhman, executive director of the Neal A. Maxwell Institute, said of Elder Holland’s lecture: “Our Maxwell Institute mission statement challenges us to become ‘disciple-scholars’ who inspire and fortify Latter-day Saints in their testimonies of the restored gospel with academic work that also meets the highest scholarly standards. Elder Holland’s remarks formed a powerful charge to pursue that mission with energy and wisdom. His insight and experience, and his apostolic vision in particular, will help shape and prioritize all the good that we can do.”

Although she is not a part of the Maxwell Institute, Amanda Burnham, a junior at BYU studying communications, said she liked hearing from Elder Holland and his reminder that scholarly and academic pursuits should never contradict her spiritual beliefs.

“Sometimes as students we focus only on our studies, and we are actually studying to be a disciple,” she said. “We are disciples first.”