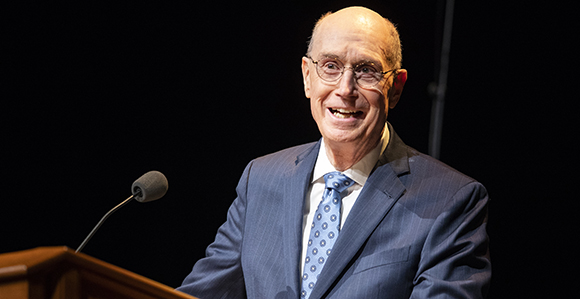 President Henry B. Eyring speaks to LDS Business College students during a devotional in the Conference Center Theater in Salt Lake City on Tuesday, November 6, 2018.

“You will never regret learning—neither in this life, nor in the world to come.” —President Henry B. Eyring of the First Presidency

As an undergraduate student struggling to learn something that seemed “was beyond me,” Henry B. Eyring felt he couldn’t sustain his efforts to keep trying.

“This first happened long ago as I sought to learn physics and mathematics in my college years,” President Eyring, who now serves as Second Counselor in the First Presidency, told LDS Business College students on Tuesday, November 6. “I felt overwhelmed. It seemed to me that the other students could work the problems and master the material more quickly than I could.”

Speaking to a capacity crowd of students in the Conference Center Theater, President Eyring remembered looking at the first question on an exam and determining to move to the next question when he didn’t know exactly how to proceed.

“I still remember the feeling of fear when I got to the last question and realized that I didn’t know how to answer any of them,” he said. “As time wore on, my discouragement led me to feel that it was useless to study. I began to … think of quitting, of doing something easier.”

One night, during that time of discouragement, President Eyring received help that made all the difference for him.

“I can remember it as if it had just happened,” he said. “Help came as a voice, an actual voice, in my mind. It was not my voice. It was a soft and loving voice—but firm. The words voiced were these: ‘When you realize who you really are, you will be sorry that you didn’t try harder.’”

Not knowing then exactly what that meant, President Eyring knew what he needed to do—he went to work.

“I felt that I must have more ability to learn than I could see in myself,” he said. “That knowledge kept me hard at work through my college years, in graduate school, and then as a teacher when it seemed still that everyone was smarter than I was and that they could do things I couldn’t do.”

It was through that understanding—that he was a spirit child of God with inherent potential to learn what God knows and that he had the ability to utilize the Atonement of the Lord and receive the gift of the Holy Ghost—that President Eyring was able to “know the truth of all things.”

“Now—you are smiling—you may reasonably ask, ‘Well, once you knew who you really were and had the Holy Ghost as your companion, could you solve every physics problem and resolve every mathematical puzzle?”

The answer: “Of course not. But with the help of the Holy Ghost, I did learn how to learn things that were beyond my natural ability.”

President Eyring learned two things: the Lord knows all truth—in physics and in everything else—and that if he lives worthy of the Holy Ghost, he can learn “true things beyond my human ability.”

“That gave me the confidence to keep trying harder even when the learning was difficult.”

From his experience, President Eyring invited students to look at educational struggles as a great blessing.

“I know school can be a grind,” he said. “I know it seems difficult. I know you get discouraged at times. I know you wonder why you are attending school at all. But keep on. Keep on hammering away. Keep on learning. You will never regret learning—neither in this life, nor in the world to come. Indeed, you will treasure forever what you learn and what you learn about how to keep on learning.”

President Eyring shared four ways in which a person might be diligent and obedient and receive the blessing of having the Holy Ghost upon them so that He can help in one’s efforts to learn.

“You know from your experience that when you become casual in your prayers, you feel less inspiration,” he said.

When a person prays with faith in Jesus Christ, the Spirit comes to him or her. As a person prays less often and with less faith in the Savior, his or her desire to pray diminishes.

“So don’t wait for a desire to pray to come to you,” he said. “Decide to pray, even when it is hard—especially when it is hard and the windows of heaven seem closed to you. If you keep trying, those windows will open.”

2. Feast on the word of God

“President Russell M. Nelson’s challenge to the women of the Church to read the Book of Mormon by the end of the year is precious educational advice—for you men too, and for me,” President Eyring said.

The Book of Mormon is scripture filled with testimony of the divinity of Jesus Christ and the reality of His Atonement, President Eyring said. As individuals read the Book of Mormon, they are inviting the Holy Ghost to come to them.

“I found that reading the Book of Mormon was the best part of my preparation for every examination in which I needed power to remember what I had tried hard to learn,” he said.

“Obedience to God’s commandments invites the influence of the Holy Ghost,” President Eyring said. “Disobedience brings a feeling of darkness and discouragement as a certain result.”

Just as missionaries and mission presidents see the connection between obedience and the companionship of the Holy Ghost, individuals also experience a “heart open to the promptings of the Holy Spirit” as they are obedient to the commandments.

Obedience is the first law of heaven, and as a person obeys they are promised an increase in faith, knowledge, wisdom, testimony, protection, and freedom.

“When we disobey, we weaken our faith, we forget our knowledge, and we cloud our wisdom,” he said.

4. Serve others for the Lord

“I have learned that service brings inspiration,” he said.

Sharing the experience he had in his final oral exam for his doctorate degree, President Eyring said that after ministering to the little branches of New England on a Saturday and Sunday before his Monday exam, he was able to find a clear and complete solution to the main exam question.

“That Monday morning, I felt perfect peace and calm,” he said.

He was able to think clearly and complete the tasks in half the time allotted.

“Less than an hour later, the chairman of the examining committee announced, without any discussion with the members of the committee, that I had passed the exam,” he said. “They all stood to shake my hand. While they were thanking me for my performance, I was silently thanking heaven for another verification of the promise of the Lord.”

Through that “happy educational experience,” as well as many others, President Eyring has learned that the Holy Ghost is sent to individuals as each obeys God’s laws.

“With the influence of the Holy Ghost, we can learn things, know things, and do things beyond our personal powers.”

“Believe that we have a divine mandate to go on learning for as long as we live and then into eternity. Believe that the Father can send us the Holy Ghost, who is the Spirit of Truth. Be patient and persistent in learning. With the help of the Holy Ghost, and by learning line upon line as we are diligent in our efforts and full of faith in Jesus Christ, we will be able to accomplish much more than we thought possible.” 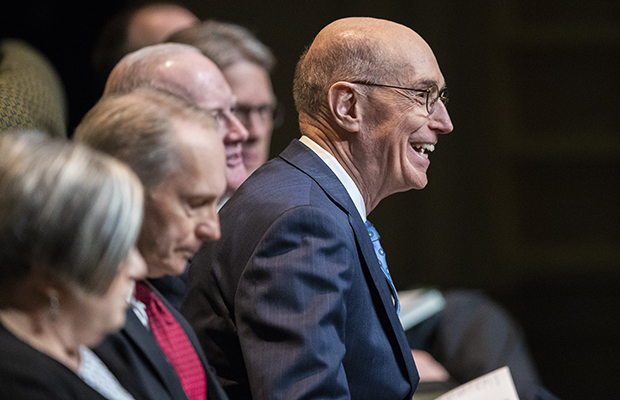 President Henry B. Eyring smiles at the audience as he takes his seat prior to speaking to LDS Business College students during a devotional in the Conference Center Theater in Salt Lake City on Tuesday, November 6, 2018. Photo by Scott G Winterton, Deseret News. 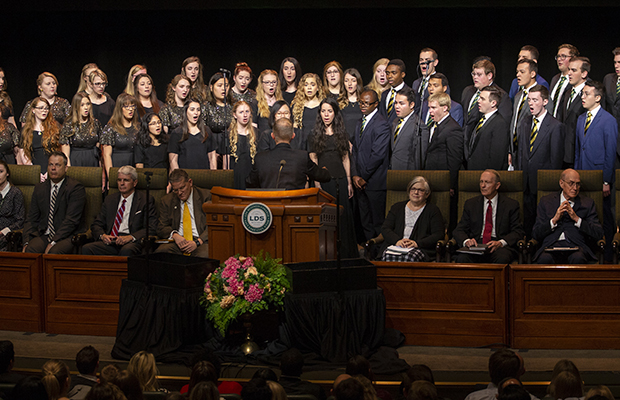 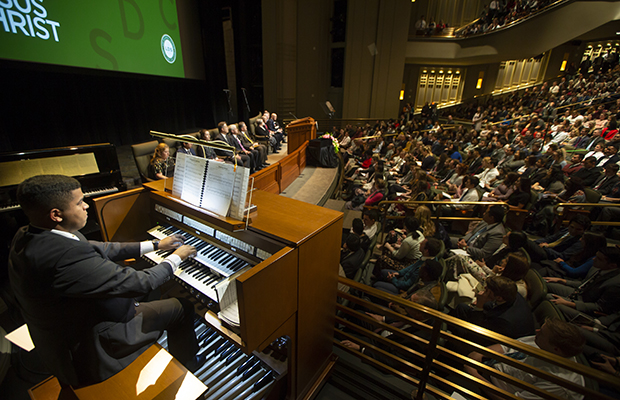 The organist plays the opening hymn prior to a devotional in the Conference Center Theater in Salt Lake City on Tuesday, November 6, 2018. Photo by Scott G Winterton, Deseret News. 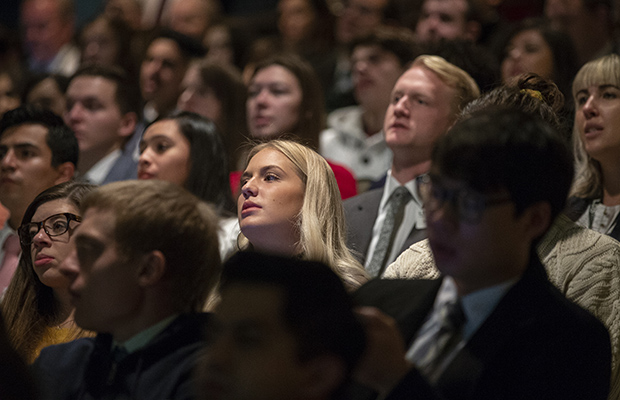 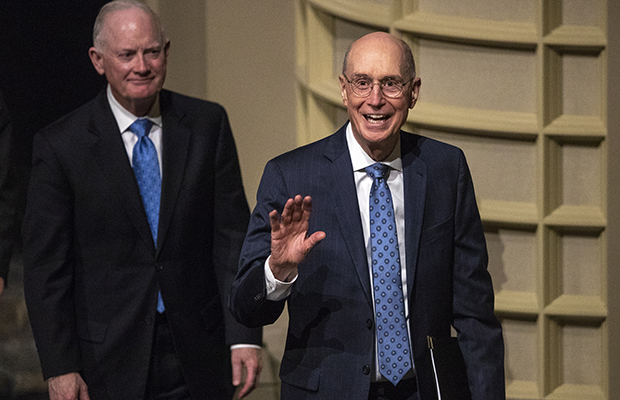 President Henry B. Eyring waves to the crowd as he and Elder Kim B. Clark, General Authority Seventy and Commissioner of Church Education, exit the Conference Center Theater on Tuesday, November 6, 2018. Photo by Scott G Winterton, Deseret News. 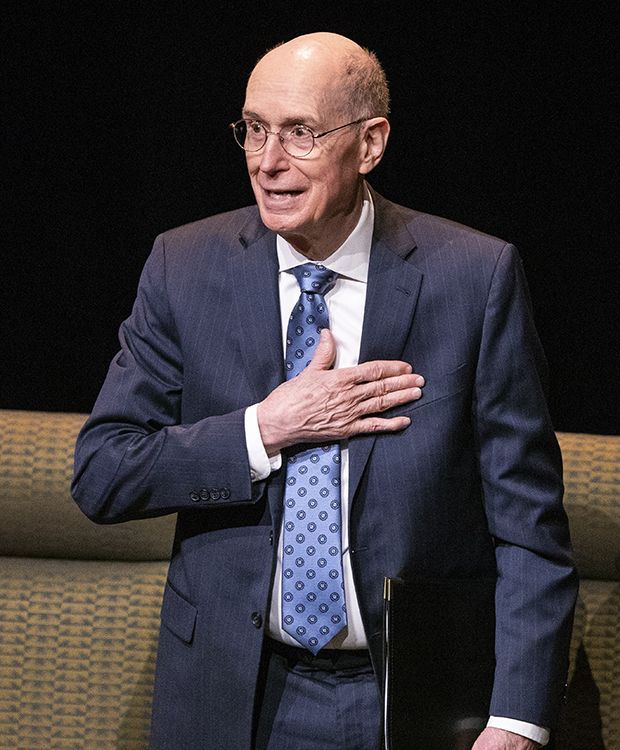 President Henry B. Eyring acknowledges the crowd as he exits after speaking to LDS Business College students at a devotional in the Conference Center Theater in Salt Lake City on Tuesday, November 6, 2018. Photo by Scott G Winterton, Deseret News. 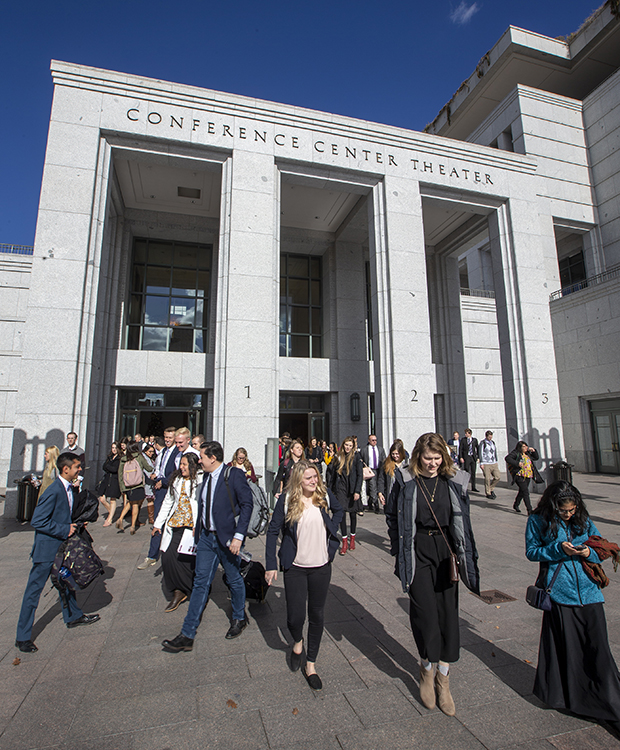