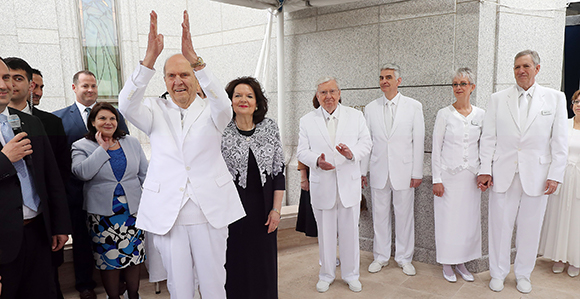 President Russell M. Nelson claps during the cornerstone ceremony for the dedication of the Rome Italy Temple of The Church of Jesus Christ of Latter-day Saints in Rome, Italy, on Sunday, March 10, 2019. Photo by Jeffrey D. Allred.

"Ninety-six percent of the existing temples have been dedicated during President Nelson’s lifetime." —Elder David A. Bednar

As proof of prolific temple building in The Church of Jesus Christ of Latter-day Saints, one can use the life and service of President Russell M. Nelson as a measuring stick for rapid temple growth.

Elder David A. Bednar of the Quorum of the Twelve Apostles did just that in his recent April 2020 general conference address, “Let This House Be Built unto My Name.”

“As members of the Lord’s restored Church, we stand all amazed at the ever-accelerating pace of His work in the latter days,” Elder Bednar said. “And more temples are coming.”

The latter statement came true later that same April 5 day. Speaking in the Sunday morning session, Elder Bednar acknowledged the Church’s 168 operating temples, adding that “forty-nine additional temples are under construction or have been announced.”

Elder Bednar also noted that the endowment ceremony is currently presented in 88 languages, with that number likely to double over the next 15 years. And he added that the Church is expecting to break ground for and start construction on 18 new temples in 2020—by contrast, the Church needed 150 years from its organization in 1830 to dedicate its 18th operating temple.

“Consider the hastening of temple work that has occurred just during the lifetime of President Russell M. Nelson,” Elder Bednar continued. “When President Nelson was born on September 9, 1924, the Church had six operating temples.

“When President Nelson was sustained as President of the Church, 159 temples were operating, an increase of 133 temples in the 34 years during which he served as a member of the Quorum of the Twelve.

“Since becoming the President of the Church on January 14, 2018, President Nelson has announced 35 new temples.

The announcement of each new temple is a source of great joy, Elder Bednar said. However, one’s primary focus should not be on the location or the beauty of the building but rather “on the covenants and ordinances that can change our hearts and deepen our devotion to the Savior.”

Following are maps showing temple locations worldwide mapped according to the time line of President Nelson’s life and service—the 6 temples operating at his birth, the 20 temples dedicated in the next six decades before his ordination as an Apostle, and the 133 temples added during the 34 years he was a member of the Quorum of the Twelve Apostles.

The maps also show by location and name the 14 temples currently under construction or in planning that were announced prior to his becoming Church President on January 14, 2018, the 9 temples dedicated during his tenure, and the 43 temples that President Nelson has announced in his first 27 months as the Church’s leader. 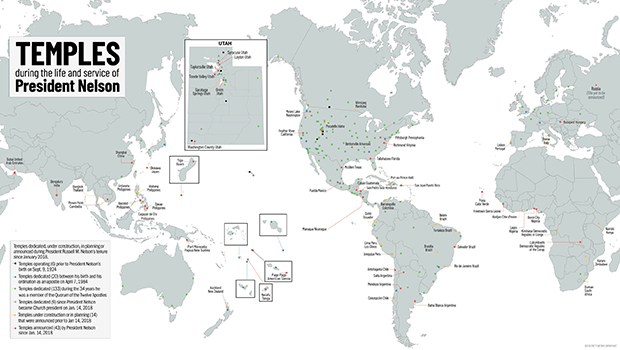 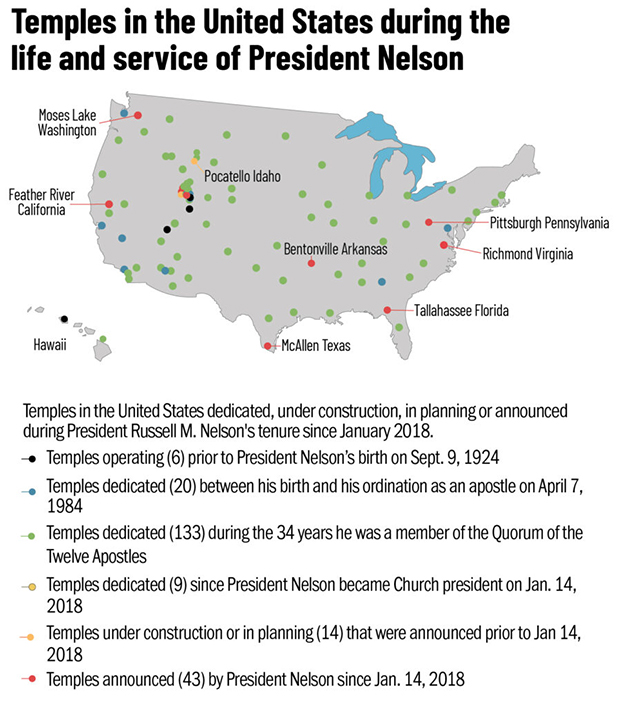 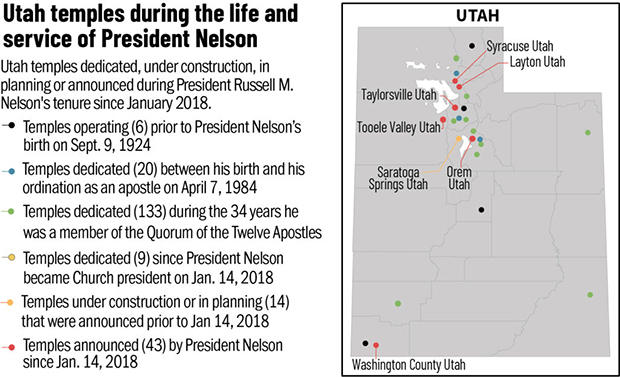 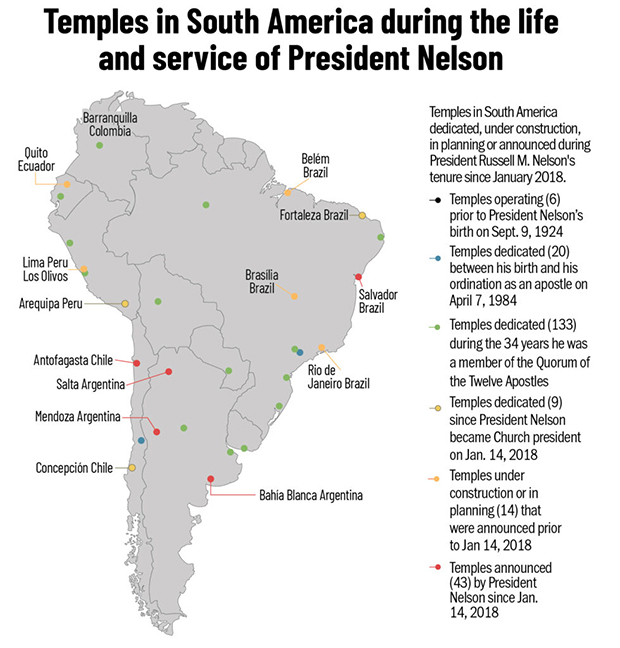 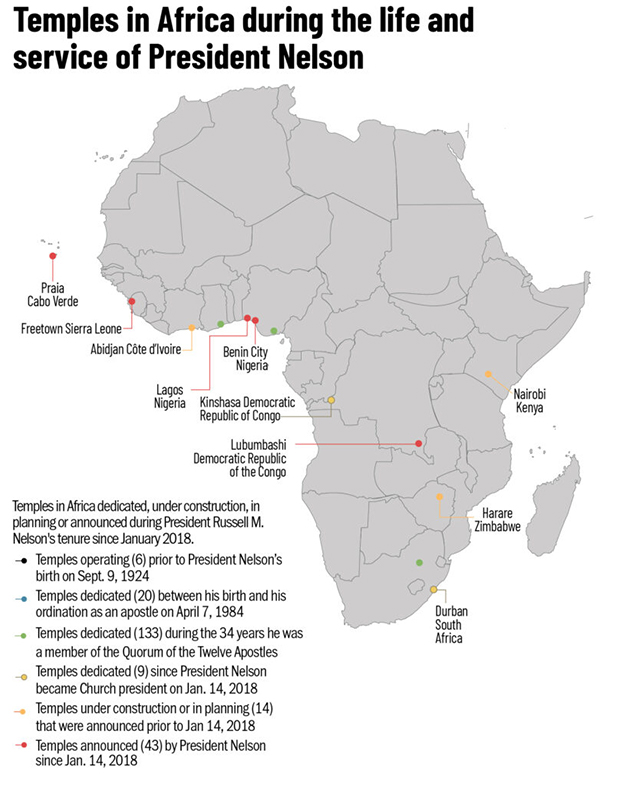 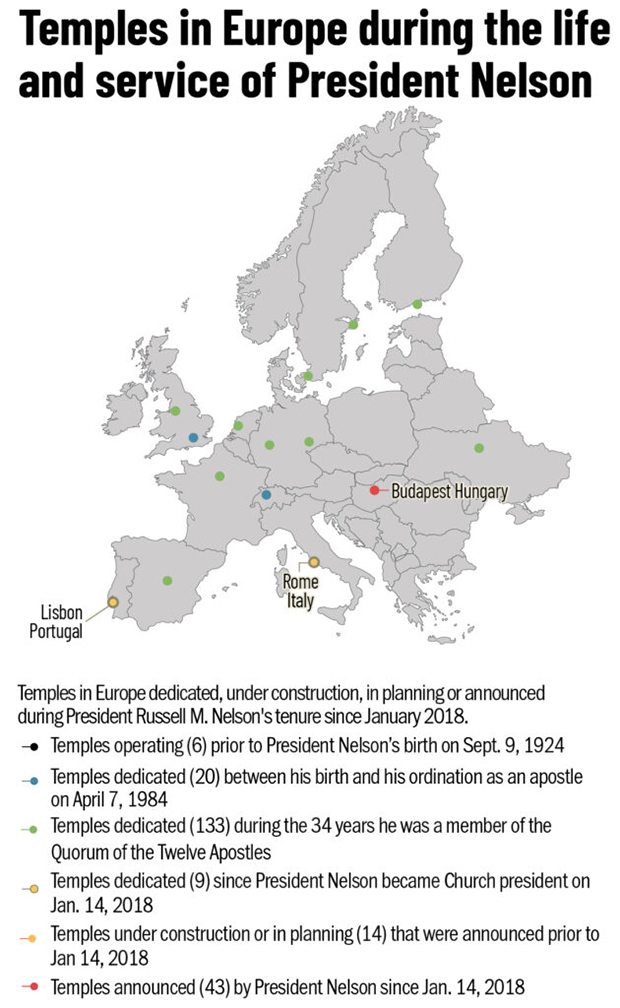 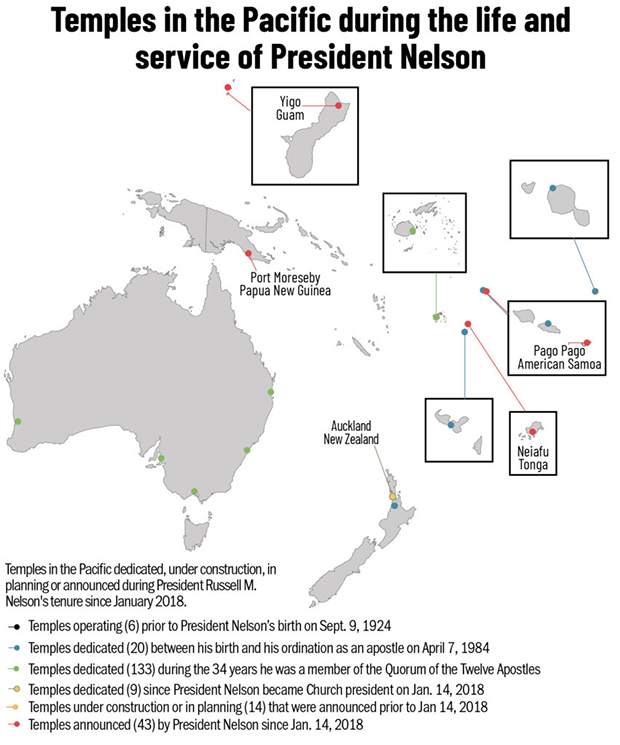 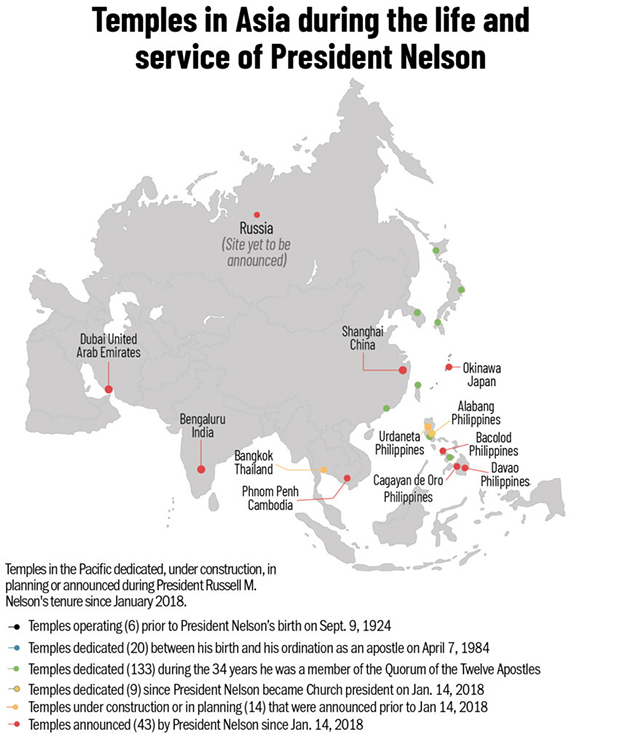