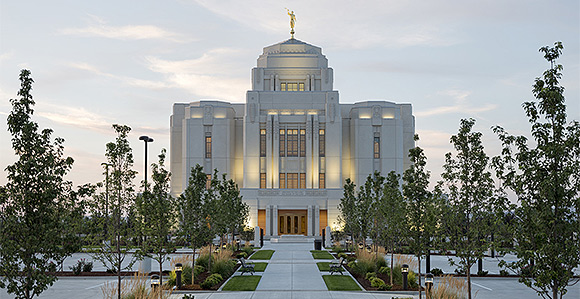 Exterior view of the Meridian Idaho Temple, prior to the new temple’s October 2017 open house.

“It’s on a bluff that overlooks the Boise River. It’s just a beautiful setting,” said Tom Lindhardt, project manager of the temple. “As you look to the views of the north and the east, you start to see the foothills of the Sawtooth Mountains.”

Free tours of the temple will be available beginning Saturday, October 21, 2017. The open house continues through November 11, excluding Sundays. Reservations for the complimentary open house tickets are available online at templeopenhouse.ChurchofJesusChrist.org.

“It’s an opportunity to feel the beautiful peace of this temple, the spirit of the temple,” said Lindhardt. “People of all faiths will enjoy their visit to the open house.”

As part of the open house and dedication activities, 6,000 local youth will participate on November 18 in a cultural celebration honoring Idaho and Church history. The celebration will be held at the Taco Bell Arena on the Boise State University campus in Boise.

The temple will be dedicated the following day on Sunday, November 19, in sessions at 9:00 a.m., 12:00 noon, and 3:00 p.m. The dedication will be broadcast to members of the Church at meetinghouses in Idaho and within the temple district. In those areas, the three-hour schedule of meetings will be canceled for that Sunday to enable members of the Church to participate in and focus on this sacred event. 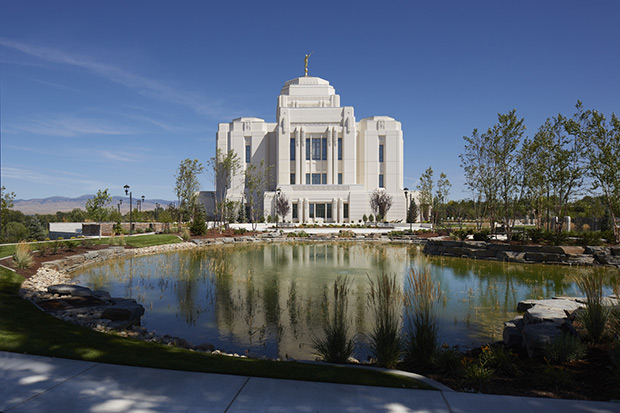 Exterior view of the Meridian Idaho Temple, prior to the new temple’s October 2017 open house.

“It is a house where we literally believe it is God’s house on earth,” explained Lindhardt. “One of the special, unique things of the temple is it seals families forever, and families are such a central role in the gospel.”

Lindhardt said the Sawtooths and other mountains in the area influenced the temple’s design, which had its beginnings when he visited the temple site on a rainy March day more than five years ago. The temple is located in an agricultural area settled by descendants of Mormon colonizers.

“It was just a hay field,” said Lindhardt. He continued, “[The temple has] kind of a unique shape and design. … It doesn’t have the traditional tall spires of a lot of the Latter-day Saint temples.”

The temple’s dome has an octagonal shape. “It has a titanium shingle in it that changes color depending on the sunlight, kind of from a brown to a gold to a tan,” he added.

“The design motifs that you’ll see throughout the temple are the camas flower and the syringa flower,” said Lindhardt. “You’ll see them in the exterior precast throughout the site and on the building itself. They’re carved into the carpets in the sealing rooms and in the celestial rooms.” The syringa is the state flower of Idaho.

There are more than 100 paintings inside the temple, including 10 original pieces of art. Two original murals reflect the Idaho mountains and wilderness. 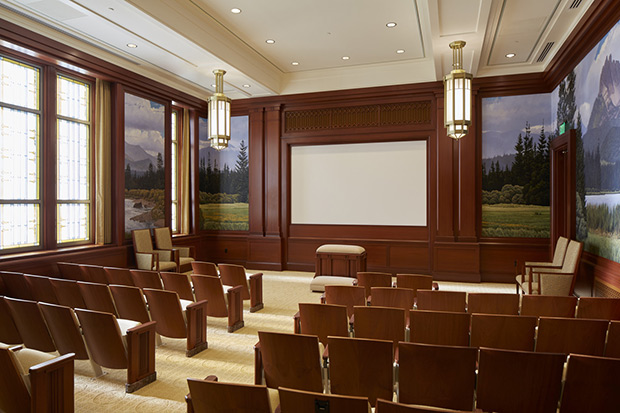 An instruction room inside the new Meridian Idaho Temple.

“It’s been special to me to be able to use their motifs and help them build a temple that they can just love for generations to come,” he said.

Stone used inside the temple is marble that was quarried in Egypt, Italy, and Spain. Thousands of plants and shrubs were used to landscape the temple grounds, including native conifers and hundreds of rose bushes.

The Meridian Idaho Temple was announced by President Thomas S. Monson at the Church’s April 2011 general conference. Ground was broken for the temple on August 23, 2014.

Lindhardt said the temple announcement was a welcomed surprise to residents. “I think it caught a lot of them off guard with the Boise [Idaho] Temple already in the valley, just a little over 12 miles away. I don’t think they expected to have another temple so close and in their vicinity.”

Local Latter-day Saints expressed their appreciation to those building the temple by providing treats and lunches to the construction workers. “The Primary children will write notes to the workers, and that touches them more than you could imagine. And it just shows the excitement through the valley for this new temple that they get in their backyard,” he said.

This will be the Church’s fifth temple in the Gem State, with others located in Boise, Rexburg, Twin Falls, and Idaho Falls. A sixth temple, in Pocatello, has also been announced (see related article). 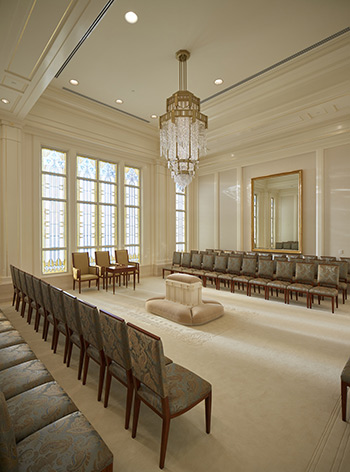 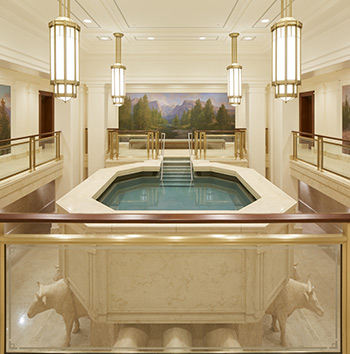 The baptismal font of the new Meridian Idaho Temple. 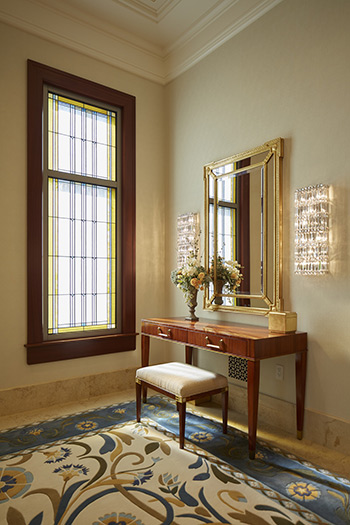 A view inside the bride’s room of the new Meridian Idaho Temple.

An instruction room inside the new Meridian Idaho Temple. 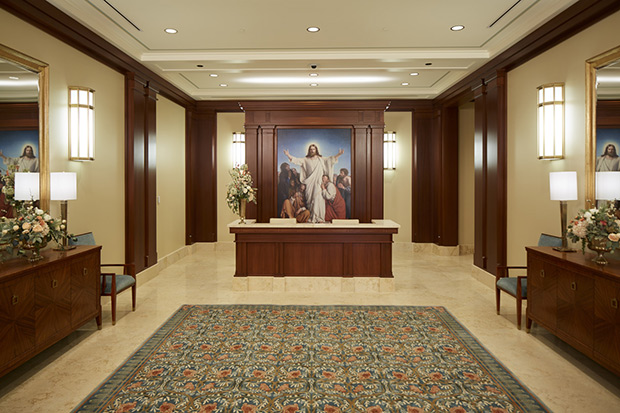 The entry of the new Meridian Idaho Temple. 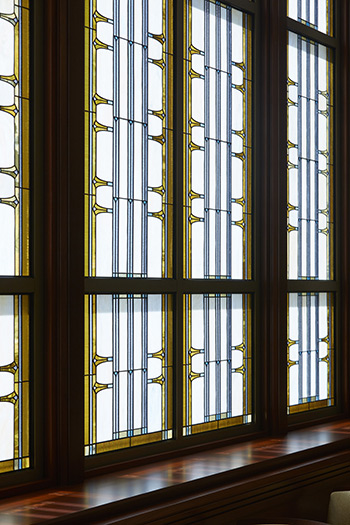 A detail shot of glass-art windows of the new Meridian Idaho Temple.