“A Century of Honor” Chronicles Scouting in the Church 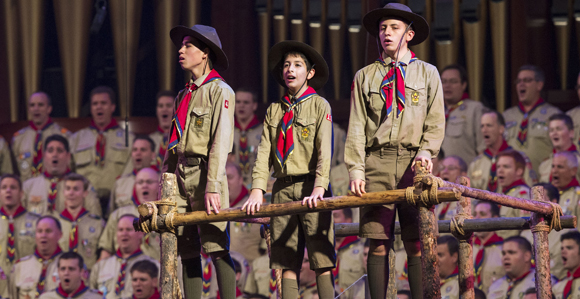 Scouts perform as thousands of Scouts and their leaders assemble Tuesday, October 29, 2013, in the Conference Center in Salt Lake City to celebrate a century of honor.

“May you uphold your promise as a Boy Scout to do your duty to God and your country and serve others at all times.”
—President Thomas S. Monson

For 100 years, LDS Scouts have hiked mountain trails, bunked under open skies, and earned Eagle Awards and merit badges ranging from American Business to Woodwork. But the history of LDS Scouting transcends rank advancements, courts of honor, and summer camps.

Scouting in the Church has, first and foremost, been defined by bridge building—bridges that connect a young man to his fellow Scouts, his leaders, his community, and, most important, the Lord.

A century has passed since The Church of Jesus Christ of Latter-day Saints became the first organization to formally sponsor Scouting troops for its youth.

Since then, millions of LDS young men have worn the iconic uniform of the Boy Scouts of America. Legions of men and women, meanwhile, have served as leaders in Scout troops and Cub Scout packs.

The Church’s 100-year-old partnership with Scouting was celebrated Tuesday evening, October 29, in the Conference Center in an original stage production chronicling the ongoing story of LDS Scouting. The program—which was broadcast live to thousands of meetinghouses across the United States—included choir music, historical reenactments, and video tributes to what Church and Scouting leaders called “A Century of Honor.”

President Thomas S. Monson was recognized at the event for his lifelong service and support of the Scouting movement. BSA national president Wayne Perry, a Church convert, added his voice to a variety of Church and Scout leaders who offered thanks to President Monson in video tributes—including President Monson’s two counselors in the First Presidency, President Henry B. Eyring and President Dieter F. Uchtdorf.

Earlier on the day of the event, President Monson was presented Scouting’s Medal of Honor for saving the life of a young girl who was drowning in the Provo River when he was 12.

“That was just the beginning of a lifetime of reaching out and rescuing others in need of hope, friendship, encouragement, and strength,” said Brother Perry. “Further evidence of President Monson’s enduring commitment to the values of Scouting came in his response to that presentation, when he recited the Scout Oath and Law flawlessly.”

“This state-of-the-art facility will provide hands-on training, where Scouts can not only learn leadership principles but also have the opportunities to put them into practice,” he said.

President Monson, who has served on Scouting’s national executive board for nearly 44 years, said he was humbled by the recognition.

“I love the Boy Scout organization and can think of nothing with which I would rather have my name associated than the Leadership Excellence Complex of this organization,” he said. “Scouting changes the lives of boys in positive ways, and I am grateful that this complex will help provide the training for them to become the leaders of tomorrow.” 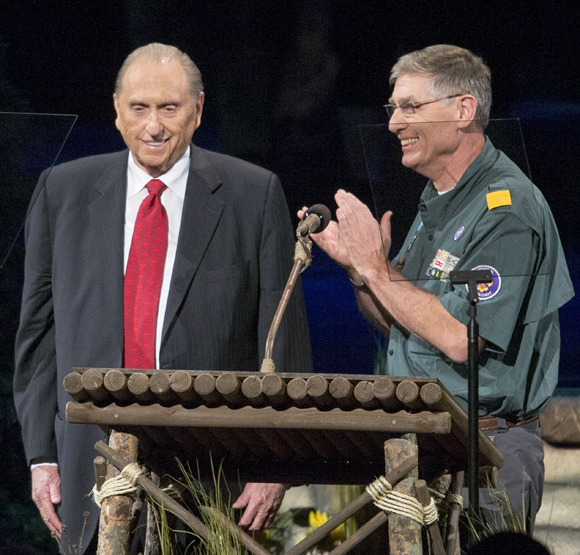 National President, Boy Scouts of America, Wayne Perry announces President Thomas S. Monson as the recipient of The Honor Medal. Thousands of scouts and their leaders assemble Tuesday, Oct. 29, 2013 in the Conference Center in Salt Lake City to celebrate a century of honor. Photo by Scott Winterton, Deseret News.

He then recalled his own adventures as a Boy Scout, including his first overnight camp during a cold winter weekend at Tracy Wigwam in Millcreek Canyon. (His parents delivered ice cream to the shivering Scouts. The boys had secretly hoped for hot chili.)

Scouting, he concluded, brings out the best in boys and their leaders.

“As you continue to participate in this fine program, your abilities to think, to plan, and to achieve will be heightened. This, along with your personal integrity and spirituality, will help guide you and keep you on the right path as you journey through life.”

President Monson noted that the principles taught in Scouting are more relevant today than at any time before. “May you uphold your promise as a Boy Scout to do your duty to God and your country and serve others at all times.”

In a video tribute, President Eyring said President Monson does not simply teach the values of Scouting—he lives them to the fullest.

“In all that he has done throughout his life, Scouting has never been far from President Monson’s mind to build a boy and to teach him [that] to run and win the race of life is significant beyond all worldly honor.”

Also in a prerecorded message, President Uchtdorf called President Monson “a role model” because of his Scout-like commitment to help another in need. “His example has shown the world that a single Scout can be a powerful source of strength and hope by serving God and fellowman.”

“Thomas S. Monson demonstrates the highest quality of leadership to which all of us should aspire,“ he said. “He set high moral standards for himself and for those around him, and he leads by example. He embodies the deepest and longest lasting values of Scouting.”

Reenactments and video clips told the story of the history of Scouting and its storied partnership with the Church. The program also championed Scouting’s guiding principles such as honor to God, duty, parents, and leaders.

The evening’s event—which included a cast of hundreds of actors—reaffirmed LDS Scouting’s commitment to adventure and outdoor fun while building bridges to God and others, including those who will come after. Clips included testimonials from World War II–era LDS Scouts who spoke of the influence the program continues to have in their lives.

Other clips highlighted the priceless tradition of young men in uniform gathering around a campfire with their leaders and discovering the wonders of God’s creations and priesthood fellowship.

The stage production also celebrated the big-hearted fun that defines the Scouting experience for Aaronic Priesthood holders. One light-hearted song even saluted the essential role mothers typically play in helping their sons earn their Eagle Awards.

The evening concluded with a performance of the Mormon Tabernacle Choir, who sang “This Land Is Your Land,” “God Bless America,” and “The Battle Hymn of the Republic.”

Additional music was provided throughout the evening by a choir of Eagle Scouts and a collection of Cub Scouts.

A recording of the centennial celebration can be viewed at scouts100.ChurchofJesusChrist.org.