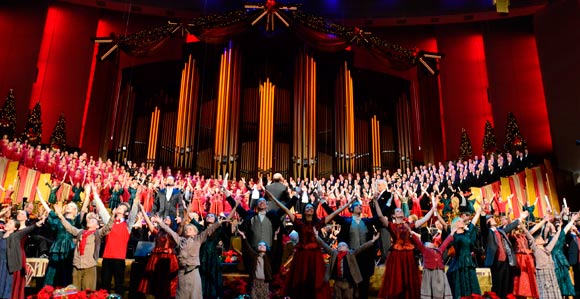 He coined the term “the greatest generation” with his best-selling book about Americans who weathered the adversity of the Great Depression and World War II. Small wonder that veteran newsman Tom Brokaw’s contribution to the Mormon Tabernacle Choir’s Christmas concert this year would be a dramatized reading of one of the most memorable and touching events of the war’s aftermath, the saga of the American “candy bomber.”

Mr. Brokaw, with British operatic and Broadway tenor Alfie Boe, joined the choir and Orchestra at Temple Square on the Conference Center stage December 13, 2012. Additional performances will take place December 14 and 15. The choir’s Music and the Spoken Word broadcast Sunday morning, December 16, will also feature the guest artists, with a mini-concert to follow for the audience seated in the Conference Center.

Gail Halvorsen, the active Latter-day Saint and U.S. Air Force pilot who became famous as the “candy bomber” for his benevolence during the Berlin airlift of 1948–49, was the subject of Mr. Brokaw’s script.

To the background music of the choir and orchestra, he told the story of Brother Halvorsen, using his nickname Hal.

“That snowy Christmas Eve, as Hal radioed for clearance to land, his mind wandered back six months to the day that changed his life,” Mr. Brokaw related. “He had been standing at the end of the Tempelhof runway taking home movies of arriving planes when he noticed about 30 children on a grassy strip just beyond a barbed wire fence.”

For nearly an hour, Brother Halvorsen responded to the children’s eager questions about the planes and the airlift. He was touched that these children seemed unusual in that they did not beg for candy, as was typical of that time for children encountering American servicemen, but were simply grateful for what the airlift had given them.

On an impulse, Brother Halvorsen dug into his pockets and found only two sticks of chewing gum. These he broke into four pieces and passed them through the fence.

“Without a word, the four children tore the gum wrappers into strips and passed them to the others one by one,” Mr. Brokaw related, “each small nose that was pressed to the paper breathing the minty smell. Never had he seen such expressions of joy and wonder, even at Christmas.”

Brother Halvorsen and his buddies subsequently pooled their rations of gum and chocolate to support his idea of dropping candy from the air to the German children waiting below, each piece tied to a tiny parachute fashioned from a white handkerchief.

He told them how to recognize his plane: He would wiggle its wings. From that signal the beneficiaries of his kindness came to call him “Uncle Wiggly Wings.”

His initiative drew the attention of the press and ultimately his superiors, who liked the idea. It was expanded into “Operation Little Vittles.” Candy and handkerchiefs poured in from around the world.

“The children made friends of their former enemies, and their parents' hearts were softened,” Mr. Brokaw said. “The wounds of war began to heal.

“By December, the Little Vittles operation had gathered 18 tons of candy from American candy makers, and three more tons came in from private donors, the spirit of Christmas descending on people everywhere, lifting them up in the joy of giving.”

As Mr. Brokaw concluded the narrative, simulated snow began to fall from the ceiling in the Conference Center, along with hundreds of candy pieces attached to handkerchief parachutes.

But the bigger surprise came a few minutes later, when Mr. Brokaw introduced Brother Halvorsen himself, now age 92, who appeared onstage in his pilot’s uniform and was swarmed by a crowd of children dressed in 1940s style clothing.

Greeted by a standing ovation, Brother Halvorsen told Mr. Brokaw and the audience, “These two sticks of gum changed my life forever. Through the years I’ve had many wonderful gifts, but … they pale in comparison to the fulfillment and the happiness of serving others, giving outside of oneself.”

He told of one dispirited child who on a cloudy day was surprised to encounter a chocolate bar landing at his feet, thrown from the passing airplane overhead. The boy later told Brother Halvorsen it took him a week to eat the candy bar. “But then he said with a pause, 'It wasn’t the chocolate that was important. What is important was that somebody in America knew I was in trouble and somebody cared.'”

Responding to a question at a news conference on Friday, Mr. Brokaw credited the candy bomber segment of the program to “the genius” of the Mormon Tabernacle Choir organization. “It was their idea,” he said, noting that he had “tweaked” the script a bit, but not much and that it was very well written.

“I was aware of [Gail] for a long time,” he said. “The candy bomber was famous in the kind of extended history of World War II that happened during the Berlin airlift. … Mr. Halvorsen was a heroic figure in that, because he brought this sense of humanity to it.”

Mr. Brokaw reflected, “I had no idea that he was still with us—I met him when I got here—though I knew that he was going to be a part of this. And I only hope that all of us at age 82, much less 92, will be as spry as he is.”

He said Brother Halvorsen told him that while growing up on a farm north of Salt Lake he had been “his father’s tractor.”

Brother Halvorsen and his wife, Alta, have served two missions for the Church as a senior couple, in London, England, in the 1980s and in St. Petersburg, Russia, in 1995.

Another of the segments in the program that drew a prolonged standing ovation was Mr. Boe’s performance of “Bring Him Home” from Les Miserables. It’s a high point in his concerts and the title song of one of his albums. He has performed the role of Jean Valjean in presentations of the musical in England, including the 25th anniversary of the show now seen widely on PBS television stations.

“It’s a song that has turned my life around,” Mr. Boe said. “I’m only one of many people who sing that song, and it’s not the singer, it’s the song, basically. I believe that music speaks for itself; the words speak for themselves.”

He noted that in the stage show, the song’s title is not “Bring Him Home,” but “The Prayer.”

“So if you have that in mind, that you’re actually saying a prayer instead of singing a song, it comes across really well, and that’s the beauty of it, really.”

Asked about the standing ovation after his performance of the song, he said he at first didn’t notice that the people were on their feet and he didn’t hear the applause.

“It’s one of those songs that I lose myself in, because it’s so emotional for me. By the end of the song, I’m in my own world; I’m still sort of praying those words, still saying, ‘Bring him home,’ even after that last note is finished.”

He added, “When I opened my eyes and took it in, it was like somebody was turning the volume switch up and that was when I could hear the applause.”

Another high point of the concert was Salt Lake Tabernacle organist Richard Elliott’s performance of his own arrangement of Leroy Anderson’s holiday classic “Sleigh Ride.” To the delight of the audience, Brother Elliott had equipped the Conference Center organ’s console with a sound-effect device of two boards adjoined with a spring. This he slapped at appropriate points for the whip cracks in the song. And he made the familiar horse whinny at the end by moving his fingers rapidly across the organ keys.