A Backstage Look at the Tabernacle Choir Christmas Concert

“We hope those that view the concert, whether here live in the Conference Center or a year later or several years later after the event, will feel the great joy, the great beauty of the season, and certainly the celebration of the birth of Christ.” —Mack Wilberg, music director of the Mormon Tabernacle Choir 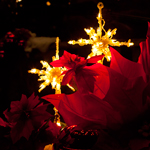 Brother Wilberg oversees all musical and creative aspects of the choir, the Orchestra at Temple Square, and the Bells on Temple Square for the Christmas concerts. All of the groups participate in the annual Christmas concerts, which have grown to be the number one program in December on the Public Broadcasting Station.

This year approximately 84,000 people attended the live concerts in the Conference Center in Salt Lake City, Utah, USA, while more than four million watched the rebroadcast of last year’s concert.

In the words of choir president Mac Christensen, “This has become the Christmas program.”

Ed Payne, the senior producer assigned to the Tabernacle Choir projects, says there are two reasons for that.

“One of the unique things about this concert is its message,” he said. “We want people to come away reminded about what this season is really all about . . . the Savior [and] the celebration of His birth.”

A second unique element is the army of volunteers that makes presenting that message possible. During the week of the concert a volunteer may donate nearly 30 hours. “It goes in harmony with the gift that we give the community by doing this concert,” Brother Payne said.

And it is a gift—in addition to many paid professionals, more than 700 choir members, musicians, dancers, ushers, traffic controllers, and backstage help donate tens of thousands of hours—and their talents—to produce a professional-level, innovative performance that focuses on the season’s spiritual side.

This year’s guest artists, operatic baritone Nathan Gunn and acclaimed actress Jane Seymour, both commented on the volunteer spirit and spiritual message they experienced while performing at the concerts.

Ms. Seymour said the story of good King Wenceslas, which she narrated during the concerts, shares the message that the volunteers were acting out.

“Here is a man who sees Christmas as not complete until a young boy understands that the gift of Christmas is to give back and not to receive. . . . This is a wonderful, universal message of giving and receiving love,” she said.

“We perform all the time, and we perform in all sorts of different venues, and what is really wonderful about being here and what adds to that element of giving is that everybody’s volunteering . . . and they’re all happy,” Mr. Gunn added. “It can’t help but put me in the kind of correct mood that we should have all the time.”

Behind the Scenes of the Christmas Concerts

Carol Iwasaki has been dancing since she was five years old and recently retired from her position as chair of the University of Utah’s ballet department. She has choreographed the concert dance routines for the last seven years. This year, that feat involved approximately 120 dancers ranging in age from 6 to 45 years.

Early in the year she attends production meetings to coordinate her choreography with the theme—this year’s was medieval fairy tale—and the music Brother Wilberg chooses, writes, and arranges. Multiple audition sessions in September have been added to accommodate the hundreds of dancers who are eager to participate.

Although each year brings new as well as old challenges—most of the dancers are not professionals, scheduling practices in the Conference Center is difficult, and getting all the dancers to attend practice can be trying—Sister Iwasaki said she keeps doing it because of the atmosphere of teamwork and divine guidance she experiences being a part of it.

“I have no doubt that this choreographing and putting this all together on behalf of all of us is a calling from our Father in Heaven,” she said. “I know that there is inspiration on what to do, what movements to make, how to interpret.”

Working closely with Sister Iwasaki is Susan Allred, who has designed costumes for the Christmas concerts since 2004. Along with about two dozen other individuals, Sister Allred sewed more than 225 costumes for this year’s production.

Over the course of about three months, 1,600 yards of fabric were transformed into costumes for more than 150 people. Some dresses include more than 13 yards of fabric, and an average fitting night will require that 60 individuals be fitted in just 3 1/2 hours.

“I’ve learned over the past seven years how to create a costume so that it can adapt to whoever needs to wear it,” Sister Allred said. “It’s very technical and logistical.”

She uses exaggerated texture and lots of color to create a spectacle that draws the audience into the theme and creates a magical effect. In 2011 royal blue, red, and gold brocade called to mind the Renaissance, the era Brother Wilberg had decided to emphasize.

The set is also new each year and evokes the time period or theme of the concerts. This year, castle spires and walls of carved Styrofoam, complete with backlit stained glass and fake snow that began to fall halfway through the concert, completed the medieval look.

“Every guest artist brings with them, of course, their own personality and their own unique talents, and this is one thing that drives every program that we do. That’s why our guest artists are such an important part of every year’s production,” he said.

According to Scott Barrick, general manager of the Mormon Tabernacle Choir, several factors help decide who is a good candidate, including who sang the previous year, the type of compositions and the genre that will be featured, and who’s available.

Pieces such as “In dulci jubilo” and Bach’s “Mighty Lord, and King All Glorious,” were hand picked for Mr. Gunn’s voice, and the narration of the good King Wenceslas story echoes Ms. Seymour’s personal message of love.

“Mack has always wanted to do something in this time period,” Brother Payne said. “[It hasn’t] fit in the concert before, but . . . he felt that Nathan Gunn had the ability to pull off some of these complicated pieces of music with their different overtones and quality.”

In addition to the colorful costumes, energetic choreography, and imaginative set design, much more goes on behind the scenes that isn’t as readily evident but that adds to the overall experience, nonetheless.

Lighting specialists control one of the largest lighting grids in the United States, focusing individual lights and colors for each song. It takes a month for a crew of 20 to redirect the lights that will be used during the concerts.

Well over 115 microphones are used to record all the sound; each instrument and the special guests have individual microphones.

Early in the year following the concerts, those separate recordings are refined and remixed to recreate what the audience heard during the live performances.

“It may require us to pull images or sound from different nights . . . to pick the best possible,” Brother Payne said.

With four performances, 15 cameras, and more than 100 microphones, it can take several months for media specialists to create the polished CD and DVD that end up on store shelves.

The Message Behind the Magic

“You can’t sit in that hall and feel that music and see what you’re seeing and not feel the Spirit,” Brother Payne said. “And so we have tried in our production, doing our best—even to the point, we hope, of perfection— . . . to be able to do that for the audience.”

“We want people to come into the hall and forget about the traffic and forget about . . . whatever is causing them problems during the holiday . . . and to relax and to enjoy this environment we’ve created for them,” he continued.

Preparation may be the key word, and the hundreds of crew members and volunteers certainly contribute to the concerts’ excellence, but Brother Payne acknowledged, “With all that’s going on there is more than any one person can get their head around . . . and it always works out. I think that is the Lord’s hand. He knows how important it is. We do all we can, we do everything that is humanly possible, and He does the rest.”

In the end, Brother Wilberg says, people should focus on the story that is read at the end of every Christmas concert and comes from Luke 2: “For unto you is born this day in the city of David a Saviour, which is Christ the Lord” (Luke 2:11).

“We hope those that view the concert, whether here live in the Conference Center or a year later or several years later after the event, will feel the great joy, the great beauty of the season, and certainly the celebration of the birth of Christ,” he said.