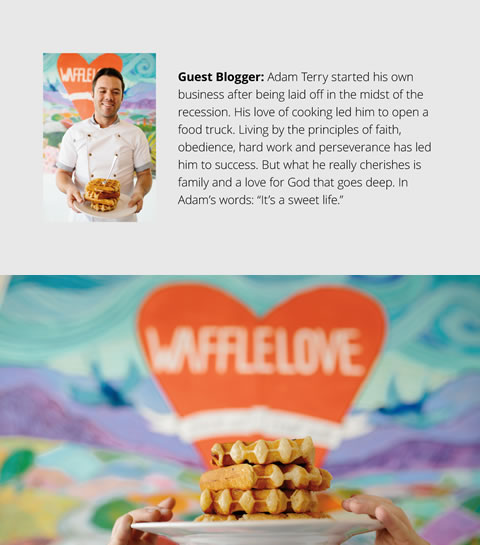 Adam Terry loves waffles, and he built his passion for pastry into a successful business. That makes for a great story, but it’s not the half of it.

Adam’s story begins with a solid university degree, a safe path to a career, a first job in banking, and a recession that left him unemployed. It’s that unemployed part that was unscripted. Adam and his wife, Melissa, had three boys at the time. They lived in a one-bedroom apartment and hoped to wait out the recession and poor job market by doing odd jobs until something better came along. But sometimes you have to make your own better. 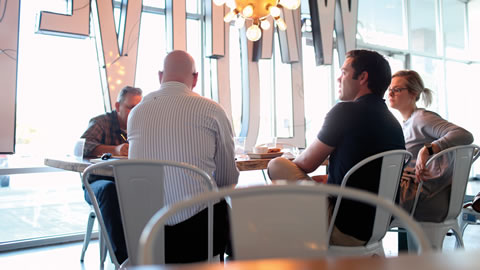 “You can’t separate the spiritual from the temporal,” Adam says. “I knew I had to start my own business but didn’t know where to start. So I prayed. I prayed with every ounce to know what to do.”

Adam had always wanted to start his own restaurant, but with little cash and no experience, he couldn’t attract the help he needed. So he bought an old van for $1500, rented an old insurance company office, and went to work building a commissary and repairing the truck. Melissa, Adam’s wife, provided the branding and painted the truck in a very cool, fresh way.

“It’s nobody else’s job but yours,” Adam says. “You have to fight for yourself. There will always be obstacles. But when you have the mentality of everything depending on you, you have to always be open to inspiration. You and God are partners.” 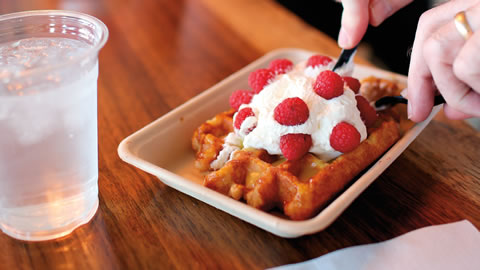 Rebuilding a truck engine and building an industrial kitchen required a lot of physical labor. Adam remembers being exhausted after a full day of swinging a sledgehammer to break out a concrete floor. It was a disheartening time, and it wouldn’t be the first. There were times when the truck broke down, when city ordinances prevented him from parking at prime locations, when nobody showed up to buy waffles. Adam faced each trial by reciting the scripture, “I can do all things through Christ which strengtheneth me” (Philipians 4:13). “Your desire to make it is God’s inspiration encouraging you to go forward. We all have this God-given gift to do well and have joy. Much of our life has already been spiritually created. We just have to access it, . . . and we have to get out of God’s way and let Him bless us.” 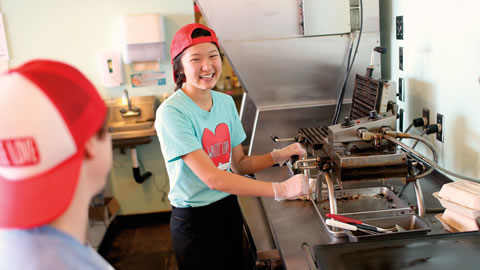 A big break came to Adam when his waffle truck appeared on the TV show The Great Food Truck Race: he gained lots of publicity and a chance to win much-needed money. There was only one hitch: the competition included a Sunday. “We weren’t going to go out on National TV and not follow the same business principles that we had been following this whole time,” Adam recalled. And that included keeping Sunday as a day of worship. The decision didn’t hurt their scores at all; in fact, they pulled into the lead as the last day of the competition began. “When you are totally committed,” Adam says, “the doors of heaven are opened.” 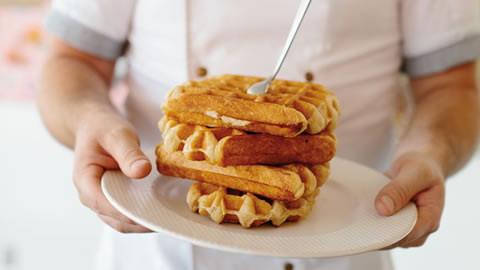 Adam now has a successful business with six trucks and five restaurants. He still lives by the principles that made their business successful: Have faith. Work hard. Be obedient. Persevere. Pray always and listen for answers.

And eat a waffle every day. 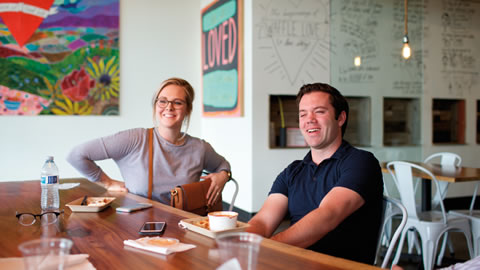 "Get Out of the Way"