Following Elder Jeffrey R. Holland’s visit to the United States Military Academy at West Point, Val Johnson, an editor with Church magazines, interviewed him about a talk titled “Integrity” that he gave at the academy and his experiences there. Following is an abbreviated version of the conversation. 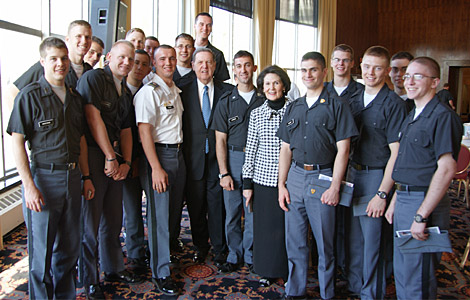 Elder and Sister Holland with cadets at the United States Military Academy at West Point the day he delivered his address “Integrity.”

How did you come to be invited to speak at West Point?

The historian at West Point is a Latter-day Saint by the name of Sherman Fleek, a retired lieutenant colonel. He has been a friend of mine ever since he was a student at Brigham Young University, and we’ve stayed in touch. We were chatting one day, and he said, “Why don’t you come to West Point to talk sometime?”

And I said, “Why don’t you create a reason for me to do so?”

What he did was consult with the academy’s chaplain and the academic dean. They decided on a series of prayer breakfasts to which ecclesiastical leaders from different religions would be invited to speak. So far, I think they’ve had a Roman Catholic archbishop. Other speakers will follow me. A Jewish rabbi will speak in September.

I think this may have been the first time a leader of our Church has spoken to an assembly at West Point.

Why were you given such a central topic on such a prominent day?

Brother Fleek will have to answer that question. Since he serves on the Cadet Chapel Centennial Committee and assists in scheduling speakers, he recommended the idea that I speak at one of the prayer breakfasts on the seven army values. He may have orchestrated that a little bit.

How many people were at the breakfast and heard you speak?

About 160 or 170. The prayer breakfasts are not mandatory. The cadets can attend or not, as they elect. I gather from what they told me that we had quite a good turnout. Most of our cadets came, as well as many of their fellow cadets. About half of those who came were our Latter-day Saints.

What was the experience like, speaking to the cadets and their officers?

I had a wonderful experience. I was received by the superintendent of the academy—he is in effect the president of the school—and the academic dean, who is comparable to the academic vice president at other colleges. The academic dean came to the prayer breakfast. He was probably relieved that I didn’t stand up and give the first missionary lesson, then invite all those in attendance to be baptized. Everyone seemed to be reasonably happy about the talk. I’ve had requests for it, including some from non-LDS administrators there. Certainly the whole chaplain’s cadre was very gracious, as were the two generals—the superintendent and the academic dean.

You mentioned the Latter-day Saint students at West Point. What is your impression of them?

I was extremely impressed. We have about 65 Latter-day Saint cadets. That’s only about 1.5 percent of the 4,400 cadets at West Point, but they surely do well. In many cases they bubble to the top in their leadership and in their academic accomplishments. Obviously the academy really likes them. Not long ago, most of the United States military academies were not happy with our students because they wanted to serve missions. Often, if they went, they weren’t allowed readmission. But things have changed. The First Captain at West Point—Tyler Gordy, the highest-ranking cadet in their organization (the cadet’s designated leader)—is an LDS young man and combat veteran. And we’ve had them in the past. In fact, a few years ago the First Captain or its equivalent at all four of the military academies was a Latter-day Saint.

I truly enjoyed having lunch with a number of the LDS cadets. West Point has the most organized meal program I’ve ever seen. They feed all 4,400 cadets in one sitting in only 15 minutes. The cadets formed in regiments and companies. The day of the talk, we were given a separate room for lunch, but it wasn’t large enough to hold all the LDS cadets, so only a few of the cadet leaders were invited. At lunch I was introduced to the entire corps of 4,400 cadets from the “poop deck” as they call it, and was welcomed by them. I understand that it was the same spot where General Douglas MacArthur made his famous “Duty, Honor, Country” speech to the corps.

After your day at West Point, did you go home? You had certainly put in a full day.

No. I spoke at a fireside that night that was open to the academy and to the surrounding stakes. There were between 500 and 600 people there. We met in the Cadet Chapel—a beautiful, old Gothic building. It was the 100-year commemoration of the chapel, so in a way we were participating in those festivities.

After that I went to New York and visited with several rabbis whom we’re maintaining contact with. One, Rabbi Schneier, is the head of the Appeal of Conscience—an impressive man. Another, Jeremy Kalmanofsky, leads a synagogue I attended that day in the Upper West Side. Ever since my work on the Jerusalem Center as president of BYU, I’ve kept in close contact with many of our Jewish friends. Rabbi Kalmanofsky actually visited the Oquirrh Mountain Utah Temple open house, and I was pleased to host him there. Whenever I get to New York and other places where we have those contacts, the Brethren have asked that I keep those contacts open. I like to visit with our friends to let them know what the Church is doing and find out what their activities are.

On Sunday I went to church in the Harlem First Ward of the New York New York Stake. They have a beautiful new building. Harlem is enjoying something of a restoration and renovation in the community. Businesses are moving in, and some of the older buildings are making way for newer buildings and high-rises. The new chapel is about a block from where the old chapel was, and it has received a lot of good publicity. The Church has been applauded for putting such a nice chapel there. The ward has a nice mix of younger and older people as well as various ethnic groups. It’s a New York kind of mix, and I found it pleasant to be there.

That evening, Sunday, I gave another fireside in the Cherry Hills stake center in New Jersey. It was basically for the Cherry Hills stake, but leaders from other stakes and the two missions in the area were invited to attend as well. Achman Corbet is our public affairs director in New York. He hosted me that weekend and arranged the fireside. We had a big, full house. I was happy to meet people whom I would not have met otherwise, to visit a place I hadn’t been to before. New York City and Washington, D.C., seem to be where many of our Latter-day Saints come and go, so it was nice to visit these New Jersey border stakes.

On Monday I went to Philadelphia and visited the new temple site there. It’s in the heart of historic Philadelphia in a lovely location. The nice thing about the site is that Philadelphia is such a strong tourist center, and the temple will be close to many of the historic sites in downtown Philadelphia. Many pedestrians viewing those other historical places will see it. I liked the architectural sketches I saw of the temple. It will be beautiful.

That’s a lot to do in one weekend. Are your visits always that jam-packed?

Yes, they are. I feel obligated, when I’m out, to do as much as I can, to go as hard as I can, to get as much done as I can. But you pay a price for that. It’s fairly fatiguing, and you don’t have time to relax and reflect on what you have learned. As General Authorities, we need to take a step back and think about how the Church is growing or developing in this area or that area. If you’re pressing so hard just to keep appointments one right after the other, you probably lose a little of that opportunity. I’m trying to strike a balance between rush and reflection.

It’s a challenge, too, to find time to read, write, and reflect in a creative way. When you have a tight schedule and it’s always go, go, go, how do you find time to write? It probably means doing it at home at ten or eleven at night or four or five in the morning. Sometimes I feel that pressure in very real, painful ways. The limits of the mortal body, of being subject to the dictates of time and the needs of the moment, are just as pressing for an Apostle as they are for anyone else. We all need to figure out a way to balance our lives between action and reflection.

It was nice to visit places I had never been before. There aren’t a lot of places that I haven’t been, so to be at West Point and visit with our cadets there was a treat. As an old university president I am interested in the education of our young people. I was proud of our students, our young men and young women, who do so well there.

One thing that members of the Church need to know is that the ministry of the 15 Apostles—the First Presidency and the Quorum of the Twelve—is a global ministry. It is as far away as Brazil—where I was for two weeks just before the speaking assignment at West Point—and as close to home as Delta, Utah, or Cherry Hills, New Jersey. All the members, wherever they live, are valuable. They all have needs. We try to get around to all of them. We try to balance our trips so eventually we will be able to visit all the places Church members live. It’s a challenge, but it’s what the Lord expects of us.