We Need Not Fear 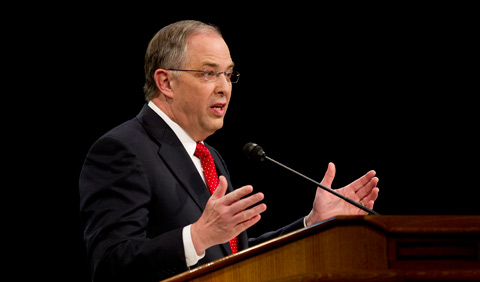 Speaking about fear and faith in the midst of intense spiritual adversity, Elder Neil L. Andersen of the Quorum of the Twelve Apostles said: “While the battle rages, we need not fear. The Lord will help you, your family, and others you love who need special help. We know the outcome. The Savior will triumph over all!”

“We recognize the enemy and understand his plan,” Elder Andersen continued. “The pride of the world seeks to destroy faith by casting doubt on the existence of God or, if not His existence, His personal care and concern for His children. … You know all of this. You are on the battlefield, right in the crossfire. The conflict will not diminish but intensify in the years ahead. How will we—how will you—withstand the attack?”

Elder Andersen asked this question of thousands of women in the closing session of Women’s Conference, held at Brigham Young University on April 26 and 27.

Elder Andersen explained that many are susceptible to spiritual attacks. “The spiritual battle rages because those who have chosen wickedness, darkness, and self-conceit are never happy to go their way alone. They form unholy alliances with what Paul calls the principalities, powers, rulers of darkness, and spiritual wickedness in high places, determined to take others with them. While wanting us all, they especially pursue the young, the unsure, the undisciplined, and the weak, hoping to destroy any hope of Christ in the fragile and vulnerable.”

Disciples of Christ, though, are defenders of the faith. “You are absolutely critical to this cause,” Elder Andersen said. “Uniting together from different backgrounds, countries, cultures, and life experiences, you help advance the stone cut without hands as it rolls forth to fill the whole earth” (see Daniel 2). 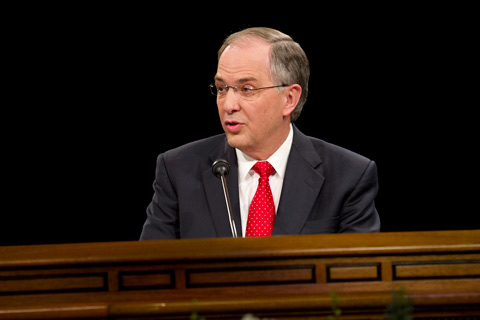 “When you are armed with righteousness and the power of God in great glory, … your belief in Christ and your love for Him fills your soul,” Elder Andersen said.

Conversion, unlike baptism, is an ongoing process, Elder Andersen said. He quoted President Marion G. Romney (1897–1988), a counselor in the First Presidency who, during his service in the Quorum of the Twelve Apostles, said: “Membership in the Church and conversion are not necessarily synonymous. Being converted … and having a testimony are not necessarily the same either. A testimony comes when the Holy Ghost gives the earnest seeker a witness of truth. A moving testimony vitalizes faith; that is, it induces repentance and obedience to the commandments. Conversion … is the fruit of, or the reward for, repentance and obedience.”

Spiritual strength comes through faith, obedience, and repentance, Elder Andersen said. “As you arm yourself for battle, your protection comes from God, who is our Father. You have faith in the Lord Jesus Christ, and you take His name upon [you].”

Additionally, obedience and repentance help individuals rally spiritual strength. Elder Andersen said: “Think about the journey of your own conversion and discipleship through the years. When you are more sensitive in taking His name upon you, seeking the spiritual gifts from His sacred ordinances, and giving added care to following Him, you feel greater strength as you are armed with righteousness. You see more clearly, sense more deeply your identity as a [child] of God, and realize in greater measure the purposes you have accomplished, are accomplishing, and will yet accomplish.”

Being armed with righteousness through conversion brings happiness, peace, a greater portion of the Holy Ghost, and a bright hope for the future. Elder Andersen said: “I look forward to the future. I hope you do too. To your children and grandchildren, your friends and associates, you can speak about the future with optimism, joy, and anticipation. You are living your mortality in a glorious time of destiny.” 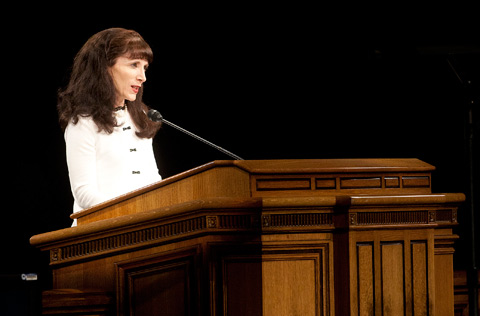 Sister Andersen encouraged, “Come to know with certainty the truth declared by an Apostle of the Lord this day, that Jesus is the Christ, the Holy Son of God, our Savior and Redeemer.”

Elder Andersen’s wife, Kathy, also spoke at the conference. She testified that personal conversion arms individuals "with the power of God and [with knowledge] through all the times and seasons of their lives that their Heavenly Father knows them and loves them and that He hears all of their prayers.” She said, “Our prayer is that [you] will come to know with certainty the truth declared by an Apostle of the Lord this day, that Jesus is the Christ, the Holy Son of God, our Savior and Redeemer.”

Access transcripts of selected talks from Women’s Conference dating back to 1997.