The Twelve and the Seventy, Part Two: Working as One

According to latter-day revelation, presiding priesthood quorums—the First Presidency, the Quorum of the Twelve Apostles, and the Seventy—are to work together to administer the Church of Jesus Christ. But how are the Seventy to learn their duties and responsibilities?

“How do we train them?” President Boyd K. Packer of the Quorum of the Twelve Apostles asked during an interview with Elder Ronald A. Rasband, Senior President of the Seventy. Then President Packer answered his own question: “They train themselves, really.” And he clarified: “The Church is one gigantic, worldwide, powerful training program.” 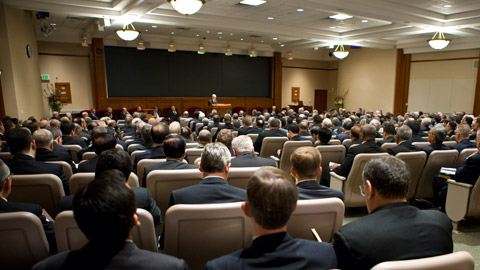 Every year, the Seventy gather during general conference for training under the direction of the First Presidency and the Quorum of the Twelve Apostles.

And the Seventy do receive direct training from the First Presidency and the Quorum of the Twelve, President Packer said. “We do most of the training at a general conference. Once a year they are all called in from all over the world, … and we spend a few days training them. But … generally they do not need much [training, just] a little [direction] in the procedures of the Church, some dos and don’ts.”

He continued: “The first section of the Doctrine and Covenants … says ‘that every man might speak in the name of God the Lord, even the Savior of the world’ (D&C 1:20). Well, that was the foundation of the priesthood. … Any worthy elder who is called and ordained an elder and holds the Melchizedek Priesthood holds … all the priesthood he needs. So they have been training where they are,” he said, noting that Seventies have learned by experience how to receive revelation, but they must act as specified in scripture, under the direction of the Twelve.

To Every Land and People

President Packer talked about taking the gospel into the land of Mongolia. “I wondered, ‘Well, what will we do for leadership there?’ And I thought, ‘Not to worry.’ In due course, we would have brethren there who were called and ordained as deacons, teachers, and priests, and then elders and have the higher priesthood conferred upon them, and then they began to know.

“The scriptures say that ‘it shall be given you in the very [minute] that portion that shall be meted unto every man’ (D&C 84:85). That is very comforting. … Once you know the Lord and know the process of revelation, He never fails to tell you what to do.” 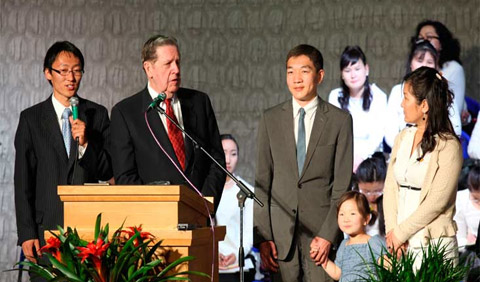 Elder Jeffrey R. Holland of the Quorum of the Twelve Apostles meets with members in Mongolia.

He told Elder Rasband that the Doctrine and Covenants makes it clear that the Seventy are “chosen by the Seventies” (see D&C 107:95). “You as president of the Seventies and your other presidents (who are your counselors) have the responsibility of choosing them.” He noted that worthy priesthood holders are “always there” and already have the authority needed to accept any calling. “[You] do not [receive] a little of the priesthood here and a little later. You get it all to begin with, and then … the offices that we hold empower us to do some things. We do not presume to step beyond that. We do not, for instance, overrule bishops. A bishop may be an unschooled man, have very little formal education, and a very modest income, and very modest in all that he does and is. But he has that authority.

“I was in Australia once, and they brought the stake president from New Guinea. Here was a man. He looked like he just came out of the jungle, which he had—[a] very ordinary looking man from New Guinea who came to Australia for a meeting of the stake presidents. I looked at him and thought, ‘He’ll do. He’ll do! He knows his people. He has the authority.’ One of the treasures I have is a little woven bag out of some kind of native fiber. His wife had made it, and he brought it to me. I have that kept with my very treasures. I have that kept in the same drawer as I keep my first copy of the Book of Mormon, because it reminds me of who they are.”

Call upon the Seventy

When Elder Rasband asked how the Seventy assist the Twelve in taking the gospel to every people in the world, President Packer replied, “Return to the revelation that says that where the Twelve could not go they were to send, and the ones we were to send were the Seventies. So as I look back on the deliberations [of the First Presidency and the Quorum of the Twelve about the Seventy], we have been very cautious. You do not stampede the Brethren very easily.” 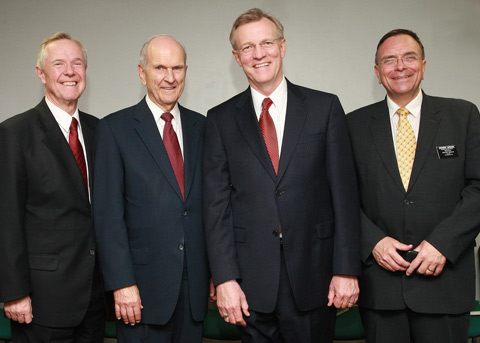 When Elder Russell M. Nelson (second from the left) visited Russia in June 2011, he interacted with members of the Seventy, Elder Dennis B. Neuenschwander (left, now emeritus) and Elder Gregory A. Schwitzer, and with President Stephen J. Sorenson of the Moscow Russia Mission (right).

He noted that “the Lord said, ‘Behold, I will hasten my work in its time’ (D&C 88:73). And you cannot push where it is not going to go. But where there would be an opening, we would start to delegate to the Seventies. It came by necessity, of course, but step-by-step from the time we had seven Presidents of the Seventy until now we have seven Presidents who preside over all the Seventies in all the world, and eight quorums of three hundred, and the day will come maybe six hundred, I suppose.”

“The Seventies have been the key to the growth of the Church,” President Packer said. “We do not spend much time downsizing in the Church. Everything is growing bigger.” Today, he concluded, “We get all around the world, and the Seventies are there.”

The video embedded with this article also includes comments from several Area Seventies describing how the Seventy fulfill their calling under the direction of the First Presidency and the Quorum of the Twelve.

NOTE: This is the second of three articles about the Twelve and the Seventy. Watch and read the first article. The third and final article will include personal witnesses of Church authorities that the work of the Church is the Lord’s work, that there are living prophets and apostles, and that through them Jesus Christ directs His Church today. 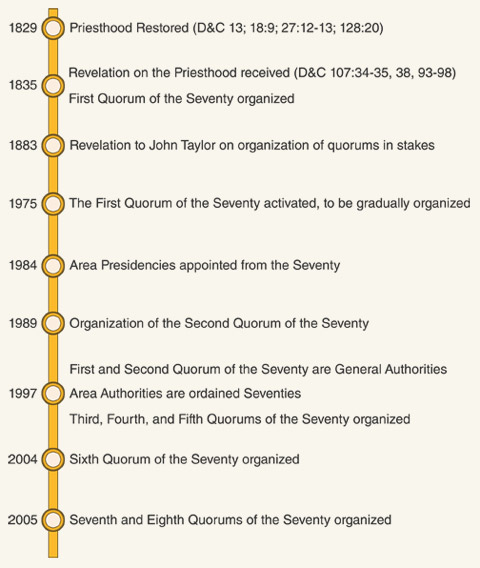 This is the second of three articles about the Twelve and the Seventy.