The Lord Calls His Prophets

The Lord has always chosen His prophets and given them power and authority to do His work on the earth.

When the prophet and President of the Church dies, the process of succession for the next President is unique and orderly. The Lord’s “remarkable system of governance”1—based on principles of priesthood keys, seniority, revelation, and common consent—ensure that the Church is never without inspired leadership.

The Lord has bestowed on His chosen prophets and apostles priesthood keys, which give them “the authority and responsibility to govern the Church, to administer its ordinances, to expound its doctrine, and to establish and maintain its practices.”2

All 15 Apostles—the three members of the First Presidency and the 12 members of the Quorum of the Twelve Apostles—are set apart as prophets, seers, and revelators, and as such “hold all the priesthood keys that have ever been conferred upon man in this dispensation.”3

“Following this inspired pattern,” President Howard W. Hunter once testified, “the Church will move forward without interruption. The governance of the Church and the exercise of the prophetic gifts will always be vested in those apostolic authorities who hold and exercise all of the keys of the priesthood.”4

The Lord controls the order of succession through seniority (determined by the date the Apostle was ordained to the Quorum of the Twelve, not his age). “The Lord … permits to come to the first place only the one who is destined to take that leadership. Death and life become the controlling factors.”5

President Gordon B. Hinckley said that when President Howard W. Hunter passed away, “there was no campaigning, no contest, no ambition for office. It was quiet, peaceful, simple, and sacred. It was done after the pattern which the Lord Himself had put in place.”6

When the Savior was on the earth, He organized His Church and called twelve Apostles to lead and minister to the people after His death and ascension to heaven. Afterward, prophets and apostles were called through revelation.7

President Gordon B. Hinckley taught, “Under the Lord’s plan, those who have responsibility to select officers are governed by one overriding question: ‘Whom would the Lord have?’ There is quiet and thoughtful deliberation. And there is much of prayer to receive the confirmation of the Holy Spirit that the choice is correct.”8

Church members have the right and privilege of sustaining or not sustaining the actions and decisions of their leaders.

President Russell M. Nelson taught that “when we sustain prophets and other leaders, we invoke the law of common consent, for the Lord said, ‘It shall not be given to any one to go forth to preach my gospel, or to build up my church, except he be ordained by some one who has authority, and it is known to the church that he has authority and has been regularly ordained by the heads of the church.’”10

“Our sustaining is an oath-like indication that we recognize their calling as a prophet to be legitimate and binding upon us,”11 President Nelson said. 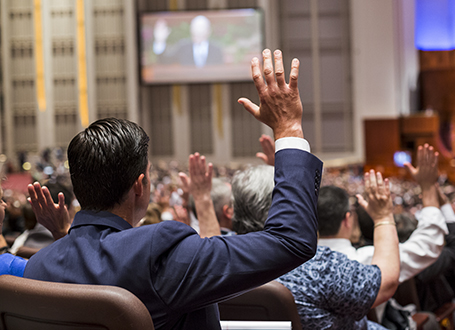 “I assure you that the Church is in good hands,” President Monson once testified.

“The system set up for the Council of the First Presidency and Quorum of the Twelve [Apostles] assures [us] that it will always be in good hands and that, come what may, there is no need to worry or to fear. Our Savior, Jesus Christ, whom we follow, whom we worship, and whom we serve, is ever at the helm.”12

After a Prophet Dies