The Lighthouse of Laie 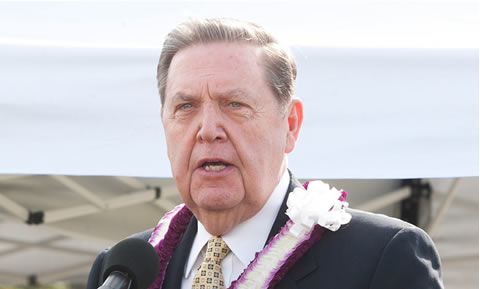 “Don’t you dare just go blend into the amoral, telestial, hard-scrabble world of today,” Elder Holland challenged graduates at BYU—Hawaii, located in the Laie, Hawaii, during a commencement address.

During the address delivered on December 17, 2011, Elder Holland counseled the students to take the best they have been given and to be strong in a world where many do not have the gospel of Jesus Christ and do not have the skills, insights, and morals that Latter-day Saints have been given. He encouraged graduates to “smile at your humble beginnings. Get over your insecurities. Be filled with faith in yourself and in your future. Take a stand. Have an influence. Keep your covenants.”

“It is incumbent upon us as students, as Latter-day Saints, and as children of God to see the divine potential in ourselves, to believe in ourselves, and to know that with God’s help there is quite literally nothing in righteousness that we cannot become,” Elder Holland said. “That is the parable of this school’s history and it ought to be the parable of your history.”

Elder Holland shared two lessons in what he called the Parable of BYU—Hawaii.

Elder Holland began the first lesson by frankly stating, “For Latter-day Saints in general and BYU—Hawaii students in particular, there should be no ‘blur in the vision of what is humanly possible.’ We of all people should not be guilty of ‘living under our moral capacity’ or, as Brigham Young regularly phrased it, ‘living beneath our privilege.’ I’m saying, in short, that if you lack confidence or always sound apologetic or feel you have an inferiority complex, get over it.”

Everyone starts humbly and with feelings of inadequacy, Elder Holland said. We all have our fears and insecurities. But like the visions seen by the prophets in the eras before us, Elder Holland said, remember that God always needs us to elevate our views.

Elder Holland counseled graduates not to dwell on what they might see as personal disadvantages, but to focus on the wonderful blessings they have had and the wonderful world of possibilities before them. And though some students may apologize for not studying hard enough, they should never apologize for the lack of opportunity, lack of possibility, lack of divine love to guide them, or lack of dreams to make them better than they ever thought they could be—because, Elder Holland said, those are gifts for the taking if they are wanted.

Take the Next Step

The second lesson, Elder Holland warned students, is that they will not always live, work, or raise their children in righteous environments.

“As graduates you will be pushed out of this nest, this little academic Garden of Eden, and you will spend some time—a lot of time—in the Cold and Dreary secular world. Don't resent that.  Don't resist it.  Don’t resist it any more than Adam and Eve did. It is part of ‘the plan’ and that world out there … desperately needs you,” Elder Holland said.

Instead, Elder Holland counseled that the graduates see their life away from school as “the next step, as an opportunity, a chance to have an impact, part of your ‘mission’ in life.”

Elder Holland said that he mentioned “mission” intentionally, because the same issue is faced by missionaries who leave the MTC and go out into the field to do the hard work they were called to do.

“They must be ready to face rejection. They must be prepared to have some uncomfortable confrontations. They must be prepared to deal with unkindness, unfortunately. In a case of two … they have to contend even with some brutality.” he said. “That is a sad fact, but it is a fact. So as new graduates we can’t buckle or give up when life is not as ideal as it was at BYU-H. The idealized life you have had here is not to be permanent but is to fortify us for the world we have been trained to enter and which needs our life, our learning, and our example. … It’s easy to talk about paradise in Laie; we talk about it a lot on the BYU-Hawaii Campus. The reality is that we can make paradise wherever we go.”

Prophets and apostles have commented about BYU—Hawaii and its role in preparing students who will become leaders and touch the lives of many people.