In 1991 an Apostle prophesied that a temple would be built in Ukraine, a former republic of the USSR. Today, only 19 years later, that prophecy has been fulfilled. 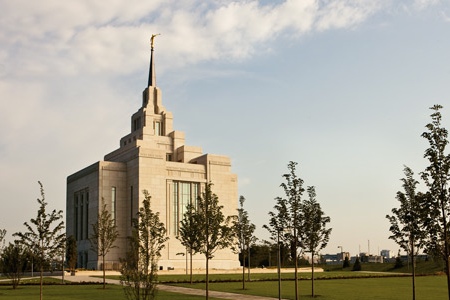 President Thomas S. Monson’s dedication of the Kyiv Ukraine Temple on August 29, 2010, fulfills a prophecy made 19 years earlier by President Boyd K. Packer, President of the Quorum of the Twelve Apostles.

More about the Temple

On September 12, 1991, then-Elder Packer and Elder Dallin H. Oaks of the Quorum of the Twelve Apostles stood on a hillside near the center of Kyiv, Ukraine, with a few other Church members. There President Packer offered a prayer of dedication and blessing upon Ukraine. In his prayer he said, “We see the day when there will be scattered in the villages here and there a member and yet another member and then a gathering and then a branch and, in due time, stakes of Zion set firmly and permanently upon the fertile soil of the Ukraine. And in due time, the spires of temples will be seen across this great land.”

He went on to pray, “As we dedicate this land, our Holy Father, we remember those who have lived here in generations past and now are gone. We pray that this moment might be the beginning of an emancipation of their spirits in the world beyond through the sacred sealing ordinances of the work for the dead that Thou hast revealed. We pray that there will be an outpouring of the Spirit of Elijah, that the names will come forth, the records made available, and the ordinances performed for them in temples in other lands and, in due time, in temples in this land.”

Earnest Prayers for a Temple

The swiftness of that prophecy’s fulfillment is breathtaking. Just 7 years after President Packer’s prayer, the First Presidency announced in 1998 plans to build a temple in Ukraine. And now the temple has been built and dedicated. With the exception of the early temples in Kirtland and Nauvoo, in no other country has a temple been built within 20 years of the gospel being introduced there.

For those who have watched closely as the Church has grown in Ukraine and the other Eastern European countries, it is obvious that the Lord’s Spirit has brooded over these countries.

In 1994 Elder Oaks returned to Ukraine and spoke at a Church conference in Kyiv. “While on my feet,” he remembers, “I felt impressed to say to these people that at the rate of growth they had established and with the remarkable people they are . . . if they remained faithful, they were likely to see a house of the Lord, a temple, in Ukraine in their lifetime. I told them to pray for that day, and the sister who offered the closing prayer began that tradition.”

Blessed by a Temple in Ukraine

Those prayerful petitions—beginning with President Packer’s prayer and continuing with the many prayers offered by Latter-day Saints throughout Ukraine—were answered quickly and even dramatically. Contrary to attitudes pervasive in Eastern Europe in 1991, the people in Ukraine, Russia, Bulgaria, and elsewhere began to turn their hearts to their ancestors. Records that could easily have been destroyed in the chaos of revolution and repression were found preserved. At great sacrifice Latter-day Saints in Ukraine began traveling to the Freiberg Germany Temple, a journey of two days, to do temple work for themselves and their deceased loved ones.

Now a temple of God graces the city of Kyiv. With shorter travel times, at less expense, members in Eastern Europe can visit the house of the Lord more often. Many more people, living and dead, will be blessed as they receive the ordinances of the temple.

It is a labor of love initiated by a prophetic blessing given barely 19 years ago.

Most of the information in this article comes from an article written by Gerry Avant and published in the Church News on August 28, 2010. See “Temple Fulfills 1991 Prophecy,” 3–4.