The Example of Joseph F. Smith 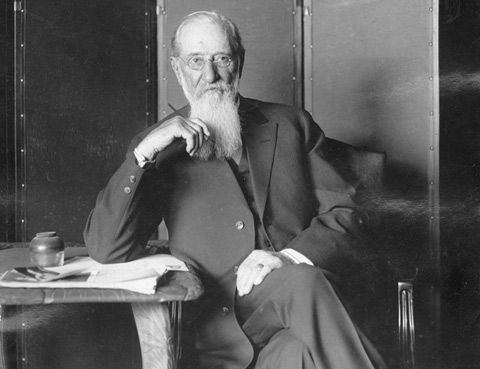 The life and ministry of Joseph F. Smith (1838–1918, sixth President of the Church) provide an instructive example of how the Lord raises up righteous men to be leaders in the Church, Elder M. Russell Ballard of the Quorum of the Twelve Apostles said.

During a Church history symposium in March, Elder Ballard, who is a great-grandson of Joseph F. Smith, recounted the history of his great-grandfather. After introducing Joseph F. Smith as his hero, Elder Ballard detailed the remarkable life and teachings of the prophet. He said: “His life is a legacy of faith we would all do well to emulate. … No leader has been more beloved as an Apostle and President of the Church by members and strangers alike.”

As the last prophet to know his uncle Joseph Smith Jr. personally, Joseph F. Smith grew up with a rich heritage, “from [which] he received the faithful, believing blood that flowed through his veins,” Elder Ballard said.

He gave a brief sketch of President Smith’s life, beginning with the prophecies of Lehi in the Book of Mormon about Joseph Smith Jr., the prophet of the Restoration. He said that faithful, devoted family members created a legacy for Joseph F. Smith.

“This believing blood of the Smiths and the Macks flowed through the veins of their children,” Elder Ballard said. “Surely the Lord was preparing the Prophet’s family to recognize the truth and accept the responsibility of supporting Joseph in his call to restore to the earth the fulness of the gospel of Jesus Christ,” Elder Ballard said.

“Now, why is it important to understand at least this much about the believing faith and trust in God of the forefathers of Joseph F. Smith? It is because of the faithful heritage he was raised in that he was so susceptible to the promptings of the Spirit, through which he gained an unwavering testimony,” Elder Ballard said.

As a boy, Joseph F. lived through the martyrdom of his father, Hyrum, and uncle Joseph Smith.

“The memory of the death of a beloved father and an adored uncle at such a tender age must have returned many times to Joseph F.’s mind, anchoring him to the eternal spirit of man,” Elder Ballard said.  “[Joseph F. Smith] said, ‘I was instructed to believe in the divinity of the mission of Jesus Christ—I was taught it from my father, from the Prophet Joseph Smith, through my mother … and all my boyhood days and all my years in the world I have clung to that belief.’’

At the age of 15, Joseph F. was called to serve a four-year mission in Hawaii, where he faced challenges and held responsibilities that would prepare him for Church leadership.

“I have thought since then that the mission as a boy to Hawaii launched President Joseph F. Smith into a lifetime of service,” Elder Ballard said, “including five missions for the Church, either as a missionary or as a mission president, for a total of 13 years, and as a defender of the Saints, standing side by side with Porter Rockwell and very likely my father’s grandfather Henry Ballard when they intercepted Johnston’s Army. “

Joseph F. Smith served 52 years in the presiding councils of the Church as a member of the Quorum of the Twelve Apostles, a counselor in the First Presidency, and President of the Church. He also presided over the Salt Lake Temple, the Sunday School, and the Young Men’s Mutual Improvement Association. His management of financial affairs freed the Church from significant debt. He began an acquisition of historical sites, developed visitors’ centers and an information center on Temple Square in Salt Lake City, and authorized the construction of the Church Administration Building and the Hotel Utah.

Elder Ballard explained that President Smith was a practical visionary, a builder, a fearless missionary, and a witness of the Restoration. As a gospel teacher he made the plan of salvation clear and understandable to all who read his discourses, Elder Ballard said, and he introduced family home evenings as the place where the gospel is best taught. He moved the Church forward during a time of extreme difficulties.

But through everything, Elder Ballard said, nothing was more important or precious to President Smith than his family.

Elder Ballard quoted President Smith: “There can be no genuine happiness separate and apart from the home, and every effort made to sanctify and preserve its influence is uplifting to those who toil and sacrifice for its establishment. …

“The home is what needs reforming. Try today, and tomorrow, to make a change in your home by praying twice a day with your family; call on your children and your wife to pray with you. … Let love and peace and the Spirit of the Lord, kindness, charity, sacrifice for others, abound in your families.”