While fulfilling assignments in Resistencia, Corrientes, Salta, and Buenos Aires, Argentina, Elder D. Todd Christofferson of the Quorum of the Twelve Apostles was asked how he personally gained a testimony of the gospel.

“That process, for me, was the process most common for everyone,” he said. “For some, testimony comes in an instant, like a miracle or an angelic visit. But for me it was incremental. It came over time. The simple things that we do helped. Studying the Book of Mormon was the key in my conversion and testimony, and what the Holy Ghost spoke to me as I read was the most important.” He also expressed gratitude that his parents shared their testimonies and that he and his wife have done the same with their children.

Many Argentinians who listened to the Apostle were reminded of their own experiences in receiving a spiritual witness, “line upon line, precept upon precept,” as described in 2 Nephi 28:30. Some wept tears of joy as they recalled their own growth in the gospel, now being confirmed by the witness of an Apostle. 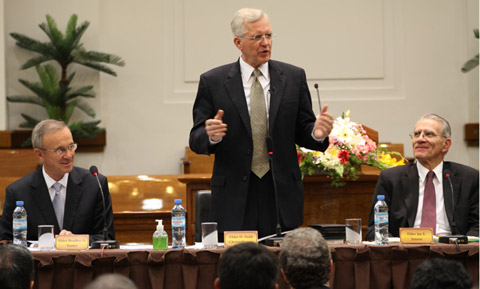 Elder D. Todd Christofferson of the Quorum of the Twelve Apostles (center) answers questions from priesthood leaders in Resistencia, Argentina, while Elder Bradley D. Foster of the Seventy (left) and Elder Jay E. Jensen of the Presidency of the Seventy (right) listen.

“What I have done best in reading scriptures with my children,” Elder Christofferson continued, “is to pause when reading a special verse and tell them, ‘Children, what we have just read is true.’ This was a simple testimony . . . not formal, but a natural expression of a parent that influences children.”

He stressed the importance of the Book of Mormon as “the instrument of conversion in our times.” He said, “It is the key to conversion; it was the key to my conversion. It is where I began to know the Lord.” He said that “if we are not constantly using it, we are failing in our duty,” but that if we will use it in everything we do, we will be guided by the Spirit. 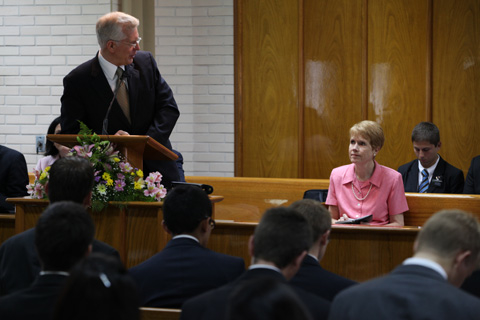 Elder D. Todd Christofferson counsels with his wife during a discussion with missionaries.

According to the Lord’s Timing

He told of his personal experience while participating in the Hill Cumorah Pageant in the state of New York as a boy. “I went to the Sacred Grove and prayed to have an experience,” he said. “I prayed for more than an hour, but nothing happened. I left wondering what I did wrong, what I lacked.” But, he said, “The confirmation came a couple of months later when I was reading the Book of Mormon in my house. When I wasn’t even asking for it, this powerful impression [came from] the Holy Ghost.”

He said testimony that comes from the Holy Ghost is a powerful witness. While we can come to doubt our physical senses, “the Spirit communicates the truth with a power that we cannot deny.” 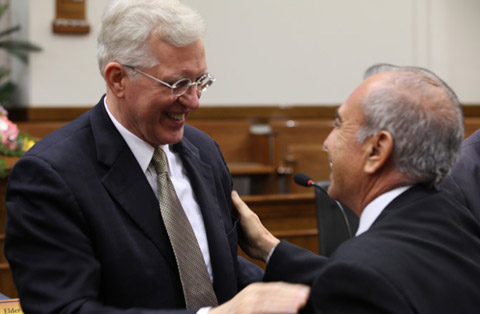 “The Lord is generous,” Elder Christofferson said. “He sends us re-confirmations again and again throughout our lives.” He recalled how, as a missionary, testifying of the First Vision, the Spirit came to him and said, “Your words are true. You speak the truth.” He said, “I received a testimony of my testimony, if you can say it that way, and so to me it is something you develop throughout your life. If you do not have something grand, like an angel coming, it doesn’t matter. The testimony that is most powerful, that has the greatest impact on you, is that of the Spirit.” 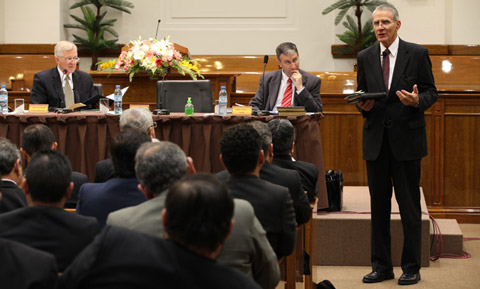 The Principle of Invitation

Elder Christofferson said that Heavenly Father invites us to be obedient. “He knows what brings happiness, but He doesn’t force us. He doesn’t make us slaves or take away agency, and we shouldn’t do it either.” He said that President Spencer W. Kimball (1895-1985, twelfth President of the Church) taught that the right of the priesthood is the right to suggest and that local leaders, husbands and wives, and parents should remember to follow the priesthood principles outlined in Doctrine and Covenants 121, which encourages gentle patience. He reminded priesthood leaders to listen to feelings expressed during council meetings.

He encouraged leaders and members to develop unity, following the example of the Father, the Son, and the Holy Ghost. He said we must have unity within our councils and meetings in order to move ahead with the same vision and that we should focus on service to others. 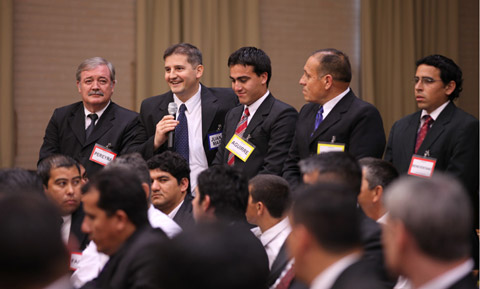 Priesthood leaders share some of their experiences during a question-and-answer session.

Elder Christofferson also taught that we receive divine power in our lives because of the covenants we make with the Lord. “Salvation comes from obedience,” he said, “To me it’s important to remember that each one of us has an infinite worth [to] the Lord and so we can have faith to overcome all things.”

He said we should be guided in life by covenants. “It is not a question of rules—the rules are to help us guide our lives while we learn the principles. But those who understand and accept and live in conformity to the principles of the gospel, to the covenants … can always receive the companionship of the Holy Ghost to guide us and to teach us beyond what we have been able to understand about the covenants. We think we understand our covenants, but as we live according to them day after day, month after month, year after year, we come to understand much more about what they are and the power that comes through the covenants.” 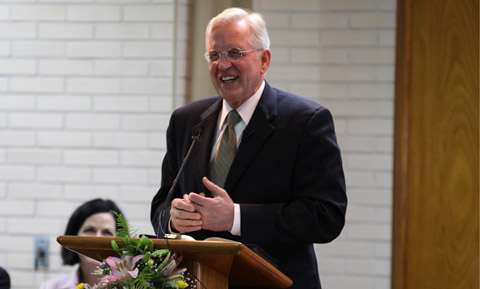 Missionaries should feel excited and happy in their work, Elder Christofferson says.

Elder Christofferson said thank you to the missionaries for their service.  “We are so grateful to you for helping us to do our apostolic duty,” he said. “Thank you. Thank you. We can’t do it without your efforts.”

He said that each missionary could have success in any mission, but that “the Lord has chosen you to come here. Why? Often we don't know. But I imagine He has specific things for you to help you grow, people you can help.” 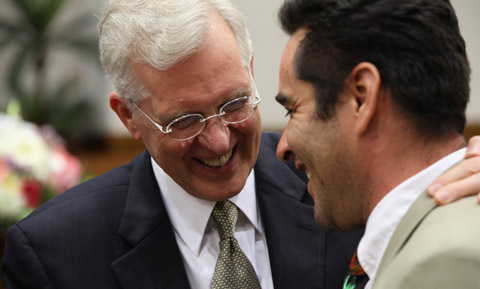 Elder Christofferson shares a lighter moment with a member after a meeting.

Step by Step, with Faith in Christ

There are times, Elder Christofferson said, when we feel like we can’t go on. But, he said, “The Lord gives us the strength to take that [next] step, and then another, and another. Sometimes it’s step by step. He gives us strength now to make the next one. Be confident in Him.”

“I understand you have much faith,” he said. “But we can have more.” He said throughout our lives we should be feasting on the word of God, especially the Book of Mormon, to build our faith in Christ. “He lives. He is at the head of the Church. He guides the Church. I have seen it. His grace is sufficient to forgive and sanctify each of us and all those we carry to Him.”