Temples Are a Witness of Our Faith, President Eyring Says 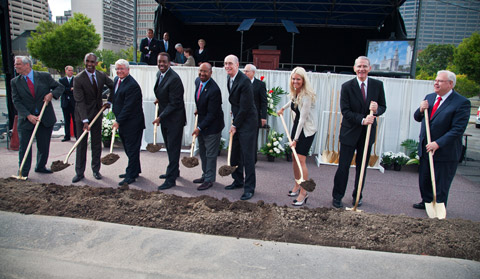 “For Latter-day Saints, no building is more sacred than a dedicated temple of God,” President Henry B. Eyring said. “Only in them can the precious bonds of family in mortality be extended for all eternity.

“Others may dispute the reality of the First Vision of the Prophet Joseph Smith in the grove in Palmyra, New York. They may doubt the divine origin of the Book of Mormon. They may question the return of Peter, James, and John and the appearance in Kirtland, Ohio, of the prophet Elijah to restore priesthood keys to the world, but every temple we build stands as a witness of our faith, that those glorious events occurred,” President Eyring said. “The work done in these sacred buildings becomes the crowning element of our religious worship.”

President Eyring delivered his message to Church leaders and members, local leaders of other faiths, and local government dignitaries at the groundbreaking and site dedication for the Philadelphia Temple in Pennsylvania on September 17, 2011. 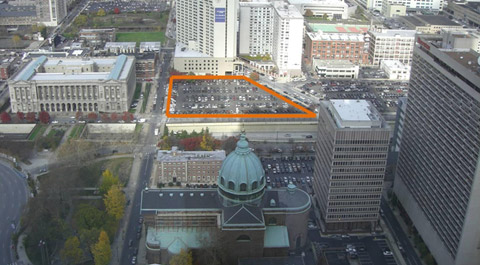 Orange lines indicate the future location of the temple in Philadelphia.

Temples around the World

President Eyring reported that there are now 135 dedicated temples around the world, located in 27 countries, on every continent but Antarctica. 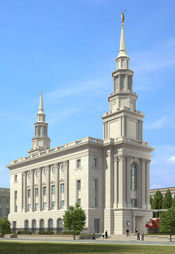 A rendition shows what the completed temple will look like​

“You well might wonder, why build so many temples, in so many places, when they are so costly to build and to maintain?” President Eyring said. “The Lord gave one answer to His Latter-day Saints in His command to build a temple in their poverty in 1836, in a little village in Ohio.” At that time, Church membership was “tiny,” President Eyring said, but God could see a “glorious future prospect as a result of the building of that one temple.”

He then quoted Doctrine and Covenants 110:9-10: “Yea the hearts of thousands and tens of thousands shall greatly rejoice in consequence of the blessings which shall be poured out, and the endowment with which my servants have been endowed in this house. And the fame of this house shall spread to foreign lands; and this is the beginning of the blessing which shall be poured out upon the heads of my people.”

He said, “The rejoicing over blessings that stem from these sacred houses is now heard across the earth and among myriads of Heavenly Father’s children on the other side of the veil of death. It is in these sacred temples that families are sealed for time and for all eternity.” 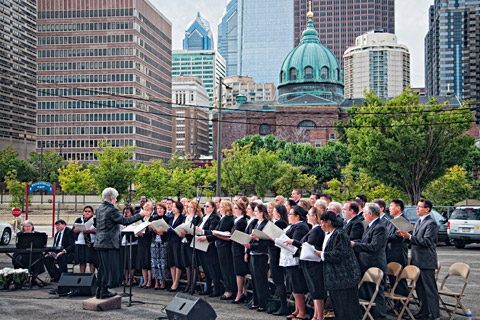 A choir performs during the groundbreaking and site dedication service.

President Eyring said, “The temple we will erect on this ground will bring special joy to one of God’s greatest prophets.” He explained that Joseph Smith met and married his wife Emma and worked on the translation of the Book of Mormon in Harmony, Pennsylvania. Heavenly messengers restored the priesthood in Pennsylvania, and the Prophet Joseph Smith presided over the official organization of the Philadelphia Branch on December 23, 1839, the date of his thirty-fourth birthday.

President Eyring said, “I am sure that he is rejoicing today to see us break ground and dedicate it for a temple of God, where he began the work of preparation.” 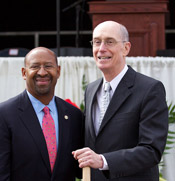 A Blessing to Families

The temple in Philadelphia will bless families in the area, President Eyring said. “It is my prayer that the temple, when it is finished, will bring increased faith and dedication to those that will be blessed to enter there. I pray that families will be inspired to live together in peace and with respect for each other. As they do, I promise you harmony and peace will spread across this community and this area as the Spirit of the Lord is invited into our hearts, our lives, and our homes.”

He also shared his testimony. “I give you my solemn witness of the divinity of this work. I testify that God the Father and the risen Lord appeared to the boy Joseph Smith. I know that because of the Atonement, made for all of us by Jesus Christ, that great plan of happiness was made possible. The priesthood was restored through the Prophet Joseph, and the keys of that priesthood are among us and will be exercised in the temple that we will build here,” he said.