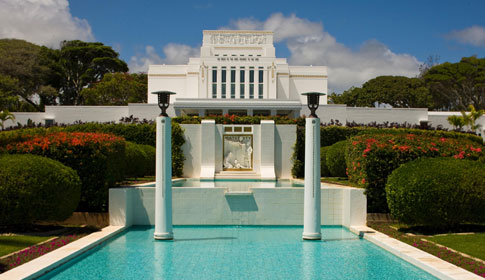 “We thank our Heavenly Father for the blessings this temple and all temples bring into our lives,” President Thomas S. Monson said at the cultural celebration prior to the recent re-dedication of the Laie Hawaii Temple on Sunday, Nov. 21. He said the temple “shines as a beacon of righteousness to all who will follow its light.”

Prophets and apostles participate whenever a temple is dedicated. Usually the President of the Church, or one of his counselors under his direction, offers the prayer dedicating the building as a House of the Lord. Prophets and apostles are also involved in approving sites where temples will be located, in calling temple presidents, and in encouraging temple attendance throughout the Church. In this instance a temple was being re-dedicated after extensive renovation.

In three dedicatory sessions, President Monson spoke and offered the dedicatory prayer. President Henry B. Eyring, first counselor in the First Presidency, conducted the sessions and spoke. Also participating were Elder Quentin L. Cook of the Quorum of the Twelve and Elder William R. Walker of the Seventy, who is executive director of the Temple Department.

A cultural celebration was held the night before the dedication, and President Monson promised the 2,000 performers involved in the program that they would be rewarded for their efforts.

“You and your leaders have spent long, long hours preparing for this evening. You may at times have wondered if the final result would be worth all the effort extended and expended. May I assure you, each of you, that any effort you put forth will be rewarded many times over.”

"I think he didn't pass a person he could have touched to shake a hand, to smile or tousle the head of a child. He was just remarkable," President Eyring said. "He was on his ground here, being among the people. He loves people and people love him. You could feel it everywhere we went."

President Eyring also said, "The Saints here have such faith that it made everything just shine. The cultural program was incomparable, mostly because of the young people and the families that must have worked with them by the hour. It was above professional; it was heavenly."