Quoting from section 84 of the Doctrine and Covenants, Elder L. Tom Perry of the Quorum of the Twelve Apostles discusses the oath and covenant of the priesthood.

Ordination alone is not sufficient to receive the blessings promised through the priesthood, according to Elder L. Tom Perry of the Quorum of the Twelve Apostles. 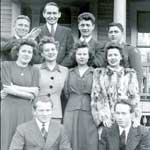 Throughout his life, Elder Perry has used the priesthood to bless those around him. Visit a photo gallery to see some pictures of his life and ministry.

“When the Lord makes an oath He puts His own reputation and feeling on that oath to be correct, and He’ll live up to that oath,” Elder Perry said. On the other hand, “a covenant is strictly an agreement between two parties, the Lord on one side and man on the other side. So the oath comes by His putting His full weight behind it, His whole being, His whole power, and a covenant is that agreement between the two.”

Elder Perry said it is important to understand that the priesthood is the government of God. “It establishes policy, procedure, and has the authority to perform the sacred ordinances of our Father in Heaven’s kingdom. It has always existed and will always exist.” He said that in order to keep doctrine pure, a line of authority was necessary. “The priesthood gives mankind the power to act as agents for the Lord on earth in performing His sacred ordinances, leading His Church.”

The Lord intended for the priesthood to bless the entire earth, Elder Perry said. “First there was the partiarchal priesthood; it was handed from father to son. And then He selected one prophet leader, Abraham, and gave him a very choice blessing, that through his lineage all nations of the earth would be blessed.”

Scriptures about the Priesthood

The Doctrine and Covenants contains several key scriptures concerning the priesthood. Here is a partial list, with links to the passages indicated.

For additional references on the priesthood, see the Topical Guide entry for Priesthood.

He spoke about the role of bishops in leading local congregations of the Church, “as one who is ordained and given the keys to preside.” He said this follows a pattern the Lord established throughout the Church. “They have the responsibility of seeing the principles, the ordinances, and the practices of the Church are all followed out in accordance with the will of the Lord.”

Therefore, Elder Perry said, it is important that those who enter into the priesthood understand the commitment they are making and prepare themselves to be worthy to serve.

Quoting again from section 84, he read, “Therefore, all those who receive the priesthood, receive this oath and covenant of my Father, which he cannot break. . . . But whoso breaketh this covenant after he hath received it, and altogether turneth therefrom, shall not have forgiveness of sins in this world nor in the world to come” (D&C 84:40–41).

“That’s pretty serious,” Elder Perry said. “You’d think people would shy away from it. But then [verse 42] says, “Wo unto all those who come not unto this priesthood,” so you’re caught both ways. You accept [the priesthood], you live worthy of it, [and] receive the blessings of the Lord. And if you turn from it, then wo unto those because they do not follow the order of the priesthood and receive the blessings for becoming the elect of God on earth.”

Coming in this series

Elder Perry explained that a priesthood quorum is three things: (1) a class, (2) a fraternity, and (3) a service unit. This definition was given in a 1937 general conference address by Stephen L. Richards (1879–1959), who at the time was a member of the Quorum of the Twelve Apostles. Here is the part of that address that discusses quorums:

“A quorum is three things: first, a class; second, a fraternity; and third, a service unit. Within it the men of the Priesthood learn of the principles of the Gospel, establish true brotherhood, and carry forward the work of Christ. It is a God-given association from which they derive more of lasting advantage than from any other fraternal organization in our society. Its prime purpose is to encourage and safeguard the individual. You can’t tell me that men can absent themselves from their quorum meetings without losing something vital to their own well being and that of the Church also.

“I fear we have some men who have received the Holy Priesthood who feel themselves too big and too important to associate with their brethren in the quorum. I am sorry for them. They are making a great mistake. For it is they, chiefly, who are retarding the progress of the work of God. I am certain that I am right when I say that if all of the men of the Priesthood would be loyal to their quorums the work of the Church would be accelerated beyond anything we have ever known” (in Conference Report, Oct. 1938, 118).

In 1951, Stephen L. Richards was sustained as First Counselor to President David O. McKay in the First Presidency. President Richards served in that position until his death in 1959.